In mathematics, a direction vector that describes a line D is any vector

Parametric equation for a line

In Euclidean space (any number of dimensions), given a point a and a nonzero vector v, a line is defined parametrically by (a+tv), where the parameter t varies between -∞ and +∞. This line has v as a direction vector.

The line equation a+tv is a generative form, but not a predicate form. Points may be generated along the line given values for a, t and v:

However, in order to function as a predicate, the representation must be sufficient to easily determine ( T / F ) whether any specified point p is on the given line [ a, v ]. If you substitute a known point into the above equation, it cannot be evaluated for equality because t was not supplied, only [ a, v ] and p. 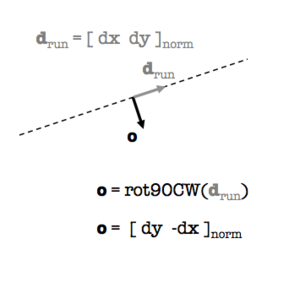 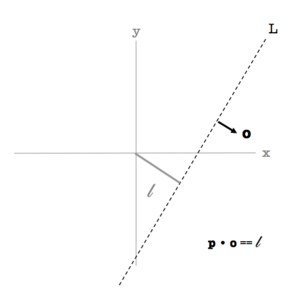 An example of a predicate form of the vector line equation in 2D is:

Here, the line is represented by two features: o and L, shown graphically in the illustration.

The orientation is computed using the same two quantities dx and dy that go into computing slope m:

Orientation o has the advantage of not overcompressing the information vested in dx and dy into a single scalar as slope does, avoiding the need to appeal to infinity as a value. Numerical algorithms benefit by avoiding such ill-behaved exceptions (e.g. , slope of a vertical line).

The 2nd feature of a 2D line represented this way is its location L. Intuitively and visually, L is the signed distance of the line from the origin (with positive distance increasing along direction o). Orientation must be solved before determining location. Once o is known, L can be computed given any known point p on the line:

Lines may be represented as feature pair ( o , L ) in all cases. Every line has an equivalent representation ( -o , -L ).

To determine if a point p is on the line, plug the value of p into the vector line predicate and evaluate it:

In computation, the predicate must tolerate finite math error by incorporating an epsilon signifying acceptable equality:

The predicate form for 2D lines can be extended to higher dimensions, using coordinate rotation (by matrix rotation). The general form is:

where R is the matrix rotation that aligns the line with an axis, and L is the invariant vector Location of points on the line under this rotation.