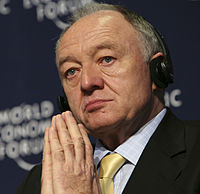 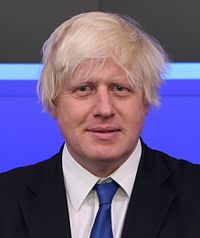 Directly elected mayors are local government executive leaders who have been directly elected by the people who live in a local authority area. The first such political post was the Mayor of London, created as the executive of the Greater London Authority in 2000 as part of a reform of the local government of Greater London. Since the Local Government Act 2000, all of the several hundred principal local councils in England and Wales are required to review their executive arrangements. Most local authorities opt for the "leader and cabinet" model where the council leader is selected from the councillors, but in some areas the council proposes to adopt the "mayor and cabinet" model. Following a successful "yes" vote in a local referendum, a directly elected mayor is established to replace the council leader. Since 2007, councils can adopt the elected mayoral model without a referendum. Most authorities with elected mayors already had a ceremonial mayor and the two roles continue to exist concurrently. As of May 2015, 16 council areas are using the "mayor and cabinet" model of governance with a directly elected executive mayor.

The system of elected mayors had been considered by the Major ministry, and the former Environment Secretary Michael Heseltine had been a proponent of it.[1] The 1997 Labour manifesto included a commitment to reform local government in London by introducing an elected mayor.[2]

The first directly elected mayor was introduced in Greater London in 2000 as part of the statutory provisions of the Greater London Authority Act 1999. The position of the elected Mayor of London is a strategic regional one, and quite different from that of local authority mayors. The work of the Mayor of London is scrutinised by the London Assembly, a unique arrangement in the English local government system. The office of mayor cannot be removed by a referendum following a petition, as is the case elsewhere in England.

Elsewhere in England and Wales, since the Local Government Act 2000, there have been a range of options for how a local council executive leadership can be constituted, and installing a directly elected mayor is one of these options. The 2000 act ended the previous committee-based system, where functions were exercised by committees of the council. All of several hundred principal councils were required to review their executive arrangements under the 2000 legislation. Local authorities considering the option of an elected mayor were required to put the question to a local referendum. It is also possible for campaign groups to trigger a local referendum with a signed petition. A number of areas with elected mayors also have civic mayors or Lord mayors and these ceremonial roles conferred on acting councillors are separate from elected mayors.

Eleven mayors were established during 2002, covering metropolitan and non-metropolitan districts, unitary authorities and London boroughs. Two further mayoralties were created: in 2005 (Torbay),[3] and in 2010 (Tower Hamlets).

Some of the first mayoral elections were won by independents, notably in Hartlepool, where the election was won by Stuart Drummond, who played Hartlepool United's mascot; and in Middlesbrough, where it was won by former police officer Ray Mallon, who left the local police force to stand for election.

Although Wales is included in the legislation, only one Welsh authority, Ceredigion, has held a referendum on such a proposal. The referendum, in May 2004, resulted in the proposal being rejected by over 70% of the voters.[4]

In October 2006, the DCLG white paper Strong and Prosperous Communities proposed that in future the requirement for a referendum to approve the establishment of an elected mayor for a council area be dropped in favour of a simple resolution of the council following community consultation. It also proposed the direct election of council cabinets where requested, and that the "mayor and council manager" system in Stoke-on-Trent be reformed into a conventional "mayor and cabinet" system, it having been the only English council to adopt that system.[5] The "mayor and council manager" option was later revoked by the Local Government and Public Involvement in Health Act 2007 and a referendum was no longer required if two thirds of a council voted in favour of the change in executive model.[6] The elected cabinet option was not taken forward. The 2007 legislation required all local authorities to review their executive arrangements again and consider the case for an elected mayor.

Mayors for the cities

In February 2006, the Institute for Public Policy Research published a report calling for elected mayors in Birmingham and Manchester, which was positively received by the government, but not by the two city councils concerned. British Prime Minister David Cameron expressed support for the system, saying directly elected mayors are "accountable" and can "galvanise action".[7] On 2 May 2012, think tank the Bow Group published a short article supporting directly elected mayors in large English cities.[8]

The Localism Act 2011 permitted central government to trigger referendums for elected mayors,[9] and this was intended to happen in the largest cities during 2012. Ahead of this, Leicester City Council in 2011 and Liverpool City Council in 2012 exercised their option to have a directly elected mayor without a referendum.[10] In September 2011 citizens of Salford collected the required number of signatures to force a referendum, which was successful. The first mayoral election took place in May 2012.[11]

Using the powers in the Localism Act 2011, on 3 May 2012, referendums were held in 10 English cities to decide whether or not to switch to a system that includes a directly elected mayor.[12] Only one, Bristol, voted for a mayoral system. Doncaster voted to retain its elected mayoral system in a referendum held on the same day.

In 2014 it was announced that a Mayor of Greater Manchester will be created as leader of the Greater Manchester Combined Authority, subject to new primary legislation. From 2017 there are expected to be directly elected mayors for Greater Manchester, the Liverpool City Region, the North East, the Sheffield City Region, Tees Valley and the West Midlands as part of the devolution deals allowed by the Cities and Local Government Devolution Bill 2015–16.

Councillors have complained about the perceived excessive power of directly elected mayors.[13][14] There have been campaigns in four of the local authorities with directly elected mayors to hold referendums to abolish the posts.[15] In Lewisham, the Bring Back Democracy campaign called for a new referendum, citing poor turnout and a very close result in the 2001 referendum.[16] In April 2007, Lewisham Council voted 28–24 against a motion calling for consultation over the issue.[17]

The Local Government Act 2000 does not apply in Scotland and the Scottish Parliament has chosen to reform local government instead by introducing the Single Transferable Vote electoral system. The Scottish Conservatives support elected mayors where there is found to be "local demand in our major towns and cities".[22] A mayor in Scotland is traditionally known as a provost.

The powers of the mayor are commensurate with the kind of local authority for which they are the executive. London borough councils, metropolitan district councils and unitary authority councils have broadly similar functions, but for non-metropolitan district councils it is a subset, for example not having power over education, libraries and waste management. The Mayor of London has completely different powers to the "mayor and cabinet" leaders.

A local-authority elected mayor has powers similar to those of the executive committee in a Leader and Cabinet model local authority. These are described as either "exclusive" powers or "co-decision" powers and are defined in the Local Government (Functions and Responsibilities) (England) Regulations 2000.[23]

Co-decision powers are those the mayor shares with the council, notably the power to make the local authority's annual budget and its policy framework documents. These are: Annual Library Plan; Best Value Performance Plan; Children's Services Plan; Community Care Plan; Community Strategy; Crime and Disorder Reduction Strategy; Early Years Development Plan; Education Development Plan; Local Development Framework; and the Youth Justice Plan. To amend or reject a mayor's proposals for any of these documents, the council must resolve to do so by a two-thirds majority. This is again based on secondary legislation, in this case the Local Government (Standing Orders) (England) Regulations 2001.[24]

Exclusive powers are less easy to define, because they consist of all the powers that are granted to a local authority by Act of Parliament except those defined either as co-decision powers or as "not to be the responsibility of an authority's executive". This latter is a limited list, including quasi-judicial decisions on planning and licensing, and certain ceremonial, employment and legal decisions.

An elected mayor (in a mayor and cabinet system) also has the power to appoint up to nine councillors as members of a cabinet and to delegate powers, either to them as individuals, or to the Mayor and Cabinet committee, or to subcommittees of the Mayor and Cabinet committee. In practice, the mayor remains personally accountable, so most mayors have chosen to delegate to a very limited extent—if at all.

Local authorities in Britain remain administered by a permanent staff of chief officers led by a chief executive or chief operating officer [25] who are politically neutral bureaucrats. Their powers remain unaffected by the introduction of elected mayor. Senior officers continue to be appointed by a politically representative committee of councillors, and the mayor may not attempt to influence the decision as to who is appointed (except within the committee as a member of the committee). To maintain the staff's professional and political independence, the mayor (or any other member of the council) may not personally direct any member of staff. Accordingly, an elected mayor cannot really be accurately characterised as an executive mayor, as in parts of the US and certain other countries, but more as a semi-executive mayor.

Consultations took place in 12 English cities due to have referendums over the introduction of elected mayors, over what powers those mayors should have, and how they should be scrutinised.[26]

As of May 2014, there have been 51 referendums on the question of changing executive arrangements to a model with an elected mayor. Referendums are triggered by council resolution, local petition or central government intervention. Of these, 16 have resulted in the establishment of a new mayoralty and 35 have been rejected by voters. Average "yes" vote is 45%. Typical turnout is around 30%, but has been as low as 10% and as high as 64%. The turnout is higher when the referendum coincides with another vote, such as an election.

There have been four referendums on the question of removing the post of elected mayor. Two mayoral posts have been disestablished following a vote and two retained. 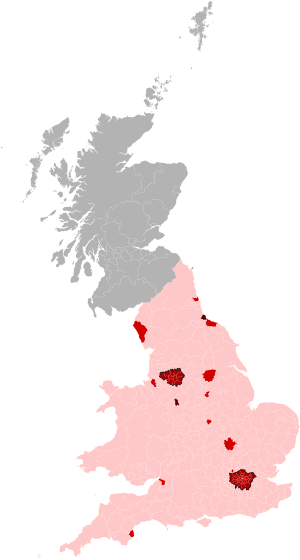 As of 2015[update] there are 18 directly elected mayors in England (including the Mayor of London), and several more will be established from 2017.