From Infogalactic: the planetary knowledge core
Jump to: navigation, search
Not to be confused with Book of Common Order. 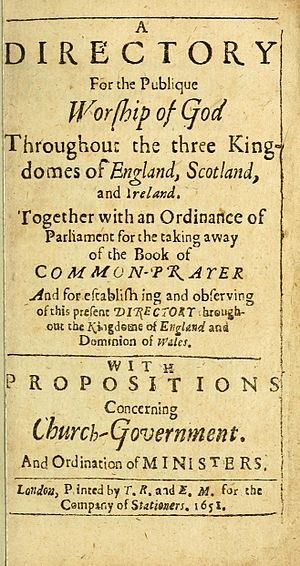 The Directory for Public Worship[1] (known in Scotland as the Westminster Directory having been approved by the Scottish Parliament in 1645) was a manual of directions for worship approved by an ordinance of Parliament early in 1645 to replace the Book of Common Prayer (and which was denounced by a counter-proclamation from Charles I).

The movement against the Book of Common Prayer, partly inspired by Parliament, had come to a head with the submission of the 'Root and Branch' petition of 1640, which demanded 'that the said government (meaning the episcopal system) with all its dependencies, roots and branches be abolished'. Among the 'branches' was the Book of Common Prayer which was said to be a 'Liturgy for the most part framed out of the Romish Breviary, Rituals, [and] Mass Book'. Thus in 1641 an abridgement of Knox's Book of Common Order was presented to Parliament. In 1644 another adaptation of the same original was presented to the Westminster Assembly and printed. However, the parliamentary divines resolved to produce their own book and set up a committee which was to agree on a set of instructions for ministers in charge of congregations, not a form of devotion but a manual of directions. While the English Book of Common Prayer had early use in Scotland, it is a fixed liturgy, providing a range of fixed prayers and detailed tables of fixed lessons. It is therefore not easy to compare it with the Directory. However, the Directory does very much follow the Book of Common Order used in Scotland from 1564 which is derived from John Knox’s Forme of Prayers used in the English Congregation in Geneva. In this book there is discretion in the wording of the prayers and no fixed lectionary.

The Directory was produced by a parliamentary subcommittee. The chair of the subcommittee was Stephen Marshal. Other members included: Thomas Young, Herbert Palmer and Charles Herlie. Representing the independent congregations there was Phylip Nye and Thomas GoodWin. Representing Scotland: Alexander Henderson, Robert Baillie, George Gillespie and Samuel Rutherford.[1] The text appears to be in the style of Phylip Nye's writing.

The Directory was something like an agenda, but it was also something of a handbook of pastoral practice containing a lengthy section on visiting the sick, and a detailed section on preaching. The book reflected the compilers' view that only what is mandated by explicit Scripture, whether by explicit command, precept or example or by good and necessary consequence can be deduced from Scripture was warranted in the public worship of God.

The objections to the Directory advanced by Dr Henry Hammond, later Chaplain to Charles I, in his ""A View of the New Directory and a Vindication of the Ancient Liturgy of the Church of England"" issued at Oxford in August 1645 are worth noting. Hammond notes six basic characteristics purposely avoided in the Directory: (1) a prescribed form or liturgy, (2) outward or bodily worship, (3) uniformity in worship, (4) the people having a part through responses in prayers, hymns and readings, (5) the division of prayers into several collects or portions, (6) ceremonies such as kneeling in communion, the cross in baptism and the ring in marriage. In respect of (1) this has been covered already. In respect of (2), doting on ceremonies and outward gestures (e.g. bowing to the east) was indeed avoided. As for (3), it was intended that there be uniformity in the parts of worship though not the words, while in regard to (4) and (5) the Directory is not so opposite as Hammond suggests although it does not seem very positive on singing. In regard to (6), kneeling in communion and the cross in baptism had been matters of long and significant controversy between the parties in the Church of England.

Hammond then notes sixteen items avoided in the Directory which are more particularly related to the parts of the service: (1) pronouncing of absolution, (2) the necessity of singing psalms and other hymns of the church, (3) the use of the doxology, (4) the use of the ancient creeds, (5) the frequent use of the Lord’s Prayer and prayers for the King, (6) saints days and the Christian year, (7) the reading of the commandments and associated prayers, (8) the order of the offertory, (9) private baptism, (10) a prescribed catechism [but this was covered by a later production of the Assembly], (11) confirmation, (12) solemnities of burial for the sake of the living, (13) thanksgiving after childbirth, (14) communion for the sick, (15) The Commination service at the beginning of Lent, (16) the observation of Lent, Rogation days and the Ember weeks.

Several of these items (1-5,7,10) had use in other Reformed Churches, but the major items did not. In response to the view that the Directory outlines a dull, unimaginative service, one must not underestimate the verbal imagery of the Puritan service based on the Bible.

Some particular emphases are the following:

The form of worship is centred on the reading of Scripture. The canonical scriptures are to be read in order, a chapter of each testament at a time, after which there was a long prescribed prayer and then the minister was to preach to the effect that 'his own and his hearers' hearts [are] to be rightly affected with their sins'.

Baptism was to be administered at this same service using a font which the people could see and where they could hear, rather than hitherto where fonts had often been placed at the entrance of the Church. A long instruction preceded the administration of the rite which, among other things, made the point that baptism is not so necessary that the child be damned or the parents guilty if it were not administered, on the grounds that the children of the faithful 'are Christians and federally holy before baptism.' There was to be prayer that the inward baptism of the Spirit would be joined with the outward baptism of water.

The Communion was to be celebrated often, though how often is not made clear - to the Scots quarterly or half-yearly was sufficient, but some English Puritan churches observed monthly, while most Anglicans only communicated once a year - and was to take place after the morning sermon. Those wishing to receive communion were to sit ""about"" or ""at"" the communion table. The italicised words were a compromise between the Scottish view of the necessity of sitting around a table and a common view in England that partaking in the pews was in order.The words of institution from the gospels or St. Paul were an essential part of the celebration followed by a prayer of thanksgiving 'to vouchsafe his gracious presence, and the effectual working of his Spirit in us; and so to sanctify these elements, both of bread and wine, and to bless his own ordinance, that we may receive by faith the body and blood of Jesus Christ crucified for us, and so feed upon him that he may be one with us, and we with him, and that he may live in us and we in him and to him, who hath loved us and given himself for us'. The bread was then to be broken and shared and the wine also. The collection for the poor was to be organised so that it in no way hindered the service.

Marriage involved the consent of the parties, publication of intention, and a religious service in a place of public worship on any day of the year but preferably not the Lord's Day. It consisted of prayer, an explanation of the origin and purpose of marriage, an enquiry as to if there is any impediment, the exchange of vows, the pronouncement that the couple be husband and wife, and a closing prayer. A register of marriages was to be kept.

Burial There was not be any ceremony at a burial because, it is stated, of the superstitions and abuses that have occurred.But it was in order for the minister to put the friends of the deceased in mind of their duty to improve the occasion, and 'civil respects or deferences' at the burial, 'appropriate to the rank and condition of the party deceased' were permitted.

Use by the Church of England

In some areas of the country, notably in London and Lancashire, Presbyterian classes (presbyteries) were set up in 1646 and operated until the Restoration of Charles II in 1660. Although by no means universally adopted even within these areas, there is good evidence to show that many of these parishes both bought and used the Directory. It was probably also used in parishes with Congregationalist, or Independent, ministers. However, those parishes that did adopt the Directory were in the minority, and the Book of Common Prayer continued in use secretly across much of the country, particularly in relation to funerals. It is clear that the Directory was deeply unpopular with the majority of the population, and some of the best evidence for its use can be deduced from negative reactions to it, in particular the dramatically reduced baptism rate in those parishes where the Directory was adopted.

Use by the Church of Scotland

The General Assembly of the Church of Scotland adopted the Westminster Directory during that Assembly's 10 Session on 3 February 1645. In adopting the text of the Directory, however, the Assembly provided several clarifications and provisions and later, during Session 14 on February 7, 1645, it provided even further clarifications for application within the Church of Scotland.[2] The adopting acts, therefore, attempted to keep intact those traditions and practices of the Scottish church where they differed from those of some English churches, whether Puritan or Independent, so long as these differences proved no offense to those English churches.[3] Such differences in implementation included, for instance, the Scots coming forward to sit around the communion table, retaining the use of the epiclesis, the singing of a Psalm while tables dismissed and came forward, the distribution of bread and wine by communicants among themselves, and "a sermon of Thanksgiving" after communion. The Westminster Directory did, however, have the effect of suppressing the Scottish "Reader's Service" and of eliminating the practice of ministers bowing in the pulpit to pray prior to the sermon.[4]