From Infogalactic: the planetary knowledge core
Jump to: navigation, search
Not to be confused with Twelve Apostles.
For other uses, see Disciple (disambiguation). 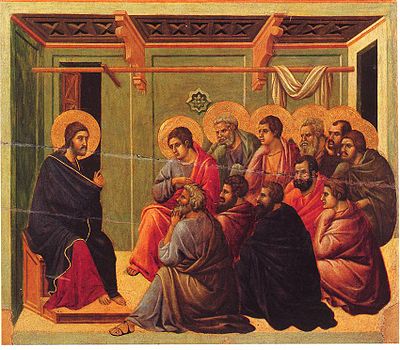 In Christianity, the term disciple primarily refers to students of Jesus and is found in the New Testament only in the Gospels and Acts. The New Testament records many followers of Jesus during his ministry, but only some became disciples. Some disciples were given a mission, such as the Little Commission, the commission of the 70 in Luke's gospel, the Great Commission after the resurrection of Jesus, or the conversion of Paul, making them Apostles, charged with proclaiming the Good News (or Gospel) to the world. Jesus emphasised that being his disciples would be costly.

The term "disciple" is derived from the Koine Greek word mathetes,[1] which means a pupil (of a teacher) or an apprentice (to a master craftsman), coming to English by way of the Latin discipulus meaning a learner while the more common English word is student. A disciple is different from an apostle, which instead means a messenger.[2][3] While a disciple is one who learns from a teacher, an apostle is one sent to deliver those teachings or a message.

Great crowd and the seventy

In addition to the Twelve Apostles there is a much larger group of people identified as disciples in the opening of the passage of the Sermon on the Plain. [Luke 6:17] In addition, seventy (or seventy-two, depending on the source used) people are sent out in pairs to prepare the way for Jesus (Luke 10). They are sometimes referred to as the "Seventy" or the "Seventy Disciples". They are to eat any food offered, heal the sick and spread the word that the Kingdom of God is coming.

The gospels use the term "sinners and tax collectors" to depict those he fraternized with. Sinners were Jews who violated purity rules, or generally any of the 613 mitzvot, or possibly Gentiles who violated Noahide Law, though halacha was still in dispute in the 1st century, see also Hillel and Shammai and Circumcision controversy in early Christianity. Tax collectors profited from the Roman economic system that the Romans imposed in Iudaea province, which was displacing Galileans in their own homeland, foreclosing on family land and selling it to absentee landlords. In the honor-based culture of the time, such behavior went against the social grain.

Samaritans, positioned between Jesus' Galilee and Jerusalem's Judea, were mutually hostile with Jews. In Luke and John, Jesus extends his ministry to Samaritans.

In Luke (10:38–42), Mary, sister of Lazarus is contrasted with her sister Martha, who was "cumbered about many things" while Jesus was their guest, while Mary had chosen "the better part," that of listening to the master's discourse. John names her as the "one who had anointed the Lord with perfumed oil and dried his feet with her hair" (11:2). In Luke, an unidentified "sinner" in the house of a Pharisee anoints Jesus' feet. Any pre-existing relationship between Jesus and Lazarus himself, prior to the miracle, is unspecified by John. In Catholic folklore, Mary, the sister of Lazarus, is seen as the same as Mary Magdalene.

Luke refers to a number of people accompanying Jesus and the twelve. From among them he names three women: "Mary, called Magdalene, ... and Joanna the wife of Herod's steward Chuza, and Susanna, and many others, who provided for them out of their resources" (Luke 8:2-3). Mary Magdalene and Joanna are among the women who went to prepare Jesus' body in Luke's account of the resurrection, and who later told the apostles and other disciples about the empty tomb and words of the "two men in dazzling clothes". Mary Magdalene is the most well-known of the disciples outside of the Twelve. More is written in the gospels about her than the other female followers. There is also a large body of lore and literature covering her.

Cleopas and companion on the road to Emmaus

In Luke, Cleopas is one of the two disciples to whom the risen Lord appears at Emmaus (Luke 24:18). Cleopas, with an unnamed disciple of Jesus' are walking from Jerusalem to Emmaus on the day of Jesus' resurrection. Cleopas and his friend were discussing the events of the past few days when a stranger asked them what they spoke of. The stranger is asked to join Cleopas and his friend for the evening meal. There the stranger is revealed, in blessing and breaking the bread, as the resurrected Jesus before he disappears. Cleopas and his friend hastened to Jerusalem to carry the news to the other disciples, to discover that Jesus had appeared there also and would do so again. The incident is without parallel in Matthew, Mark, or John.

A definition of disciple is suggested by Jesus' self-referential example from the Gospel of John 13:34-35: "I give you a new commandment, that you love one another. Just as I have loved you, you also should love one another. By this everyone will know that you are my disciples, if you have love for one another." (NRSV) Further definition by Jesus can be found in the Gospel of Luke, Chapter 14. Beginning with a testing trap laid out by his adversaries regarding observance of the Jewish Sabbath, Jesus uses the opportunity to lay out the problems with the religiosity of his adversaries against his own teaching by giving a litany of shocking comparisons between various, apparent socio-political and socio-economic realities versus the meaning of being his disciple.

"Discipleship" and "following Christ" are used synonymously. The canonical Gospels, Acts, and Epistles urge disciples to be imitators of Jesus Christ or of God himself. Being imitators requires obedience exemplified by moral behavior.[4] With this biblical basis, Christian theology teaches that discipleship entails transformation from some other World view and practice of life into that of Jesus Christ, and so, by way of Trinitarian theology, of God himself.[5]

The Apostle Paul stressed transformation as a prerequisite for discipleship when he wrote that disciples must "not be conformed to this world" but must "be transformed by the renewing of [their] minds" so that they "may discern what is the will of God—what is good and acceptable and perfect." (Romans 12:2 NRSV) Therefore, a disciple is not simply an accumulator of information or one who merely changes moral behavior in conformity with the teachings of Jesus Christ, but seeks a fundamental shift toward the ethics of Jesus Christ in every way, including complete devotion to God.[6]

Ubiquitous throughout Christianity is the practice of proselytization, making new disciples. In Matthew, at the beginning of Jesus' ministry, when calling his earliest disciples Simon Peter and Andrew, he says to them, "Follow me and I will make you fishers of men" (Matthew 4:19). Then, at the very end of his ministry Jesus institutes the Great Commission, commanding all present to "go therefore and make disciples of all nations, baptizing them in the name of the Father and of the Son and of the Holy Spirit, and teaching them to obey everything that I have commanded you" (Matthew 28:19-20a). Jesus has incorporated this practice into the very definition of being a disciple and experiencing discipleship.

Jesus called on disciples to give up their wealth and their familial ties. In his society, family was the individual's source of identity, so renouncing it would mean becoming virtually nobody. In Luke 9:58-62, Jesus used a hyperbolic metaphor to stress the importance of this, and another in Luke 14:26: "If anyone comes to me and does not hate father and mother, wife and children, brothers and sisters—yes, even their own life—such a person cannot be my disciple." There are different interpretations of this text on counting the cost of discipleship.[8]

The "Discipleship Movement" (also known as the "Shepherding Movement") was an influential and controversial movement within some British and American churches, emerging in the 1970s and early 1980s.[citation needed] The doctrine of the movement emphasized the "one another" passages of the New Testament, and the mentoring relationship prescribed by the Apostle Paul in 2 Timothy 2:2 of the Holy Bible. It was controversial in that it gained a reputation for controlling and abusive behavior, with a great deal of emphasis placed upon the importance of obedience to one's own shepherd.[citation needed] The movement was later denounced by several of its founders, although some form of the movement continues today.[9][10][11]

Radical discipleship is a movement in practical theology that has emerged from a yearning to follow the true message of Jesus and a discontentment with mainstream Christianity.[12] Radical Christians, such as Ched Myers and Lee Camp, believe mainstream Christianity has moved away from its origins, namely the core teachings and practices of Jesus such as turning the other cheek and rejecting materialism.[13][14] Radical is derived from the Latin word radix meaning "root", referring to the need for perpetual re-orientation towards the root truths of Christian discipleship.

Radical discipleship also refers to the Anabaptist Reformation movement beginning in Zurich, Switzerland in 1527. This movement grew out of the belief that the Protestant Reformers such Martin Luther and Ulrich Zwingli were not going far enough in their respective reforms. Several existing denominational bodies may be regarded as the successors of the original Anabaptists: Amish, Brethren, Hutterites, Mennonites and to some extent the Bruderhof Communities.