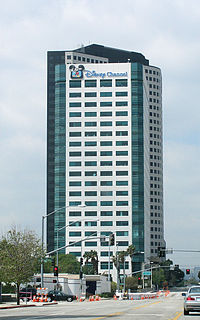 Disney Channel's headquarters in Burbank, California as it appeared in the 2000s (the logo was later removed instead of being replaced with the 2002-era logo).

Disney Channel (originally called The Disney Channel from 1983 to 1997 and commonly shortened to Disney from 1997 to 2002) is an American basic cable and satellite television network that serves as the flagship property of owner Disney Channels Television Group, itself a unit of the Disney Media Networks division of The Walt Disney Company.

Disney Channel's programming consists of original first-run television series, theatrically-released and original made-for-cable movies and select other third-party programming. Disney Channel – which formerly operated as a premium service – originally marketed its programs towards families during the 1980s, and later at younger children by the 2000s. Most of Disney Channel's original programming is aimed at kids ages 9–16, while its Disney Junior programs are targeted at children 8 years and under.

As of January 2016, Disney Channel is available to approximately 93.9 million pay television households (80.6% of households with at least one television set) in the United States.[1]

"The Disney Sunday Movie", a version of the Walt Disney anthology television series, began on the channel in 1986 concurrent with ABC's version until 1988 and NBC's "The Magical World of Disney" (1988-90).[2] Disney Channel Original Movies series of made for television movies started on August 23, 1997 with Northern Lights supplanting the previous Disney Channel Premiere Films banner.[3][4]

High School Musical 2 is currently the most successful DCOM in terms of popularity and accolades, setting a basic cable record for the single most-watched television program, as its August 2007 debut was watched by 17.2 million viewers[5] (counting sports, this record stood until a December 3, 2007 telecast of a New England Patriots-Baltimore Ravens game on corporate sibling ESPN's Monday Night Football, which was watched by 17.5 million viewers). The Cheetah Girls films were also notably successful in terms of merchiandise, and sales for its concert tour and soundtrack albums. The first film in 2003 was the first made-for-TV movie musical in Disney Channel's history, and had a worldwide audience of over 84 million viewers. The second movie was the most successful of the series, bringing in 8.1 million viewers in the U.S. An 86-date concert tour featuring the group was ranked as one of the top 10 concert tours of 2006; the tour broke a record at the Houston Rodeo that was set by Elvis Presley in 1973, selling out with 73,500 tickets sold in three minutes.

Disney XD is a digital cable and satellite television channel in the United States, which is aimed at boys and girls (originally aimed at young male audiences) aged 6–14. The channel was launched on February 13, 2009,[27] replacing predecessor Toon Disney; it carries action and comedy programming from Disney Channel and the former Jetix block from Toon Disney, along with some first-run original programming and off-network syndicated shows. Like its predecessor Toon Disney, but unlike parent network Disney Channel and its sister channel Disney Junior, Disney XD operates as an advertiser-supported service. The channel carries the same name as an unrelated mini-site and media player on Disney.com, which stood for Disney Xtreme Digital,[28] though it is said that the "XD" in the channel's name does not have an actual meaning.

On May 26, 2010, Disney-ABC Television Group announced the launch of a new digital cable and satellite channel targeted at preschool-aged children called Disney Junior, which debuted on March 23, 2012. The Disney Junior channel – which like Disney Channel (though unlike Disney XD or the channel Disney Junior replaced, Soapnet), is commercial-free – competes with other preschooler-skewing cable channels such as Nick Jr., Qubo and Sprout.[6] The channel features programs from Disney Channel's existing preschool programming library and movies from the Walt Disney Pictures film library. Disney Junior took over the channel space held by Soapnet – a Disney-owned cable channel featuring soap operas – due to that genre's decline in popularity on broadcast television, and the growth of video on demand, online streaming and digital video recorders, negating the need for a linear channel devoted to the soap opera genre. An automated Soapnet feed continued to exist for providers that had not yet made carriage agreements for Disney Junior (such as Dish Network) and those that have kept Soapnet as part of their lineups while adding Disney Junior as an additional channel (such as DirecTV and Cox Communications);[29][30] After a period during which cable providers unwilling to drop the network immediately retained it to prevent subscriber cancellations, Soapnet ceased full operations on December 31, 2013.[31]

Toon Disney launched on April 18, 1998 (coinciding with the 15th anniversary of parent network Disney Channel's launch),[34] and was aimed at children between the ages of 6- and 18 -years-old. The network's main competitors were Turner Broadcasting/Time Warner's Cartoon Network and Boomerang, and Viacom/MTV Networks' Nicktoons. Toon Disney originally operated as a commercial-free service from April 1998 to September 1999, when it became advertiser-supported (unlike Disney Channel). The channel carried a mix of reruns of Walt Disney Television Animation and Disney Channel-produced animated programming, along with some third-party programs from other distributors, animated films and original programming. In 2004, the channel debuted a nighttime program block aimed at children ages 7–14 called Jetix, which featured action-oriented animated and live-action series. During Toon Disney's first year on the air, Disney Channel ran a sampler block of Toon Disney's programming on Sunday nights for interested subscribers. The network ceased operations on February 13, 2009 and was replaced with the Disney XD, a channel aimed to children, which features broader array of programming, with a heavier emphasis on live-action programs.

Disney Channel has received heavy criticism by some critics and viewers for its programming direction in recent years. When compared to the channel's programming during the 1980s and 1990s, there is now very little, if any, programming featuring classic Disney characters, leading some fans to believe the channel fails to represent its name.

Anne Sweeney,[38] who was president of Disney Channel from 1996 to 2014, has been the target of criticism. Some critics have disapproved of the marketing strategy that was drafted during her tenure, which has resulted in the slanting of the target audience of Disney Channel's programs toward teenyboppers, as well as a decrease in animated programming and an increase in live-action shows and made-for-TV movies.[39] In 2008, Sweeney had stated that Disney Channel, resulting from its multi-platform marketing strategy using television and music, would become "the major profit driver for the [Walt Disney] Company."[40]

The channel has also pulled episodes (even once having to reshoot an episode) that have featured subject matter deemed inappropriate due to its humor, the timing of the episode's airing with real-life events, or subject matter considered inappropriate for Disney Channel's target audience. In December 2008, the Hannah Montana episode "No Sugar, Sugar" was pulled before its broadcast after complaints from parents who saw the episode through video on demand services due to misconceptions regarding diabetics and sugar intake (the Mitchel Musso character of Oliver Oken is revealed in the episode to have been diagnosed with Type 1 diabetes). Portions of that episode were subsequently rewritten and re-filmed to become the season three episode "Uptight (Oliver's Alright)," which aired in September 2009.[41]

In December 2011, Disney Channel pulled episodes of two of its original series from the network's broadcast cycle – the season one Shake It Up episode "Party It Up," and the So Random! episode "Colbie Caillat" – after Demi Lovato (star of So Random! parent series Sonny with a Chance, who was treated for bulimia nervosa in 2010) objected on Twitter to jokes featured in both episodes (the Shake It Up episode, in particular) that made light of eating disorders.[42][43][44][45] On May 17, 2013, the channel pulled "Quitting Cold Koala", a second-season episode of Jessie, prior to its scheduled premiere broadcast, due to parental concerns over a scene in which a character's gluten-free diet leads to him being ridiculed.[46]

Disney Channel has established its channels in various countries worldwide including Canada, France, South Africa, Southeast Asia, Hong Kong, India, Australia, the Czech Republic, New Zealand, the Middle East, Scandinavia, the Baltic states, United Kingdom, Ireland, Spain, Portugal, the Caribbean, the Netherlands, Israel and Flanders. Disney Channel also licenses its programming to air on certain other broadcast and cable channels outside the United States (previously like Family Channel in Canada) regardless as to whether an international version of Disney Channel exists in the country.