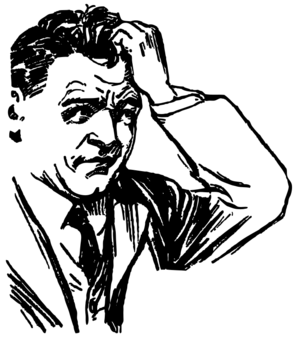 The first description of a displacement activity (though not the use of the term) is probably by Julian Huxley in 1914.[1][2] The subsequent development of research on displacement activities was a direct consequence of Konrad Lorenz's works on instincts. However, the first mentions of the phenomenon came in 1940 by the two Dutch researchers Nikolaas Tinbergen and Adriaan Kortlandt.[3]

Tinbergen in 1952 noted, for example, that ‘two skylarks engaged in furious combat [may] suddenly peck at the ground as if they were feeding’, or birds on the point of mating may suddenly begin to preen themselves. Tinbergen adopted the term ‘displacement activities’ because the behaviour appeared to be displaced from one behavioural system into another.[4]

In the assessment of animal welfare, displacement activities are sometimes used as evidence that an animal is highly motivated to perform a behaviour that the environment prevents. One example is that when hungry hens are trained to eat from a particular food dispenser and then ﬁnd the dispenser blocked, they often begin to pace and preen themselves vigorously. These actions have been interpreted as displacement activities, and similar pacing and preening can be used as evidence of frustration in other situations.[5]

Psychiatrist/primatologist Alfonso Troisi proposed that displacement activities can be used as non-invasive measures of stress in primates. He noted that various non-human primates perform self-directed activities such as grooming and scratching in situations likely to involve anxiety and uncertainty, and that these behaviours are increased by anxiogenic (anxiety-producing) drugs and reduced by anxiolytic (anxiety-reducing) drugs. In humans, he noted that similar self-directed behaviour, together with aimless manipulation of objects (chewing pens, twisting rings), can be used as indicators of ‘stressful stimuli and may reﬂect an emotional condition of negative affect’.[6]