Despite being 'the national church of the Scottish people' as recognised by Acts of Parliament, the Church of Scotland, particularly under John Knox and later Andrew Melville (and unlike the Church of England), had always claimed an inherent right to exercise independent spiritual jurisdiction over its own affairs. To some extent, this right was recognised by the Claim of Right of 1689, which brought to an end royal and parliamentary interference in the order and worship of the Church. This was ratified by the Act of Union in 1707.

However, the right of 'patronage', that is the right of a wealthy patron to install a minister of his choice into a parish, became a point of contention between those who held that this infringed on the spiritual independence of the church, and those who regarded it as a matter of property under the state's jurisdiction. As early as 1712 this right of patronage had been restored in Scotland, in spite of the remonstrances of the Church. For many years afterwards the General Assembly sought redress of the grievance, but the dominant 'moderate' party within the church acted in such a way as to avoid any confrontation with the state. 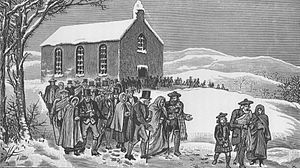 Parishioners walk out of church in protest at the unpopular appointment of a minister in the parish of Marnoch, Strathbogie in 1841.

In 1834, however, the Evangelical party attained a majority in the General Assembly for the first time in a century. One of their actions was to pass the Veto Act, which gave parishioners the right to reject a minister nominated by their patron.[1] The intention was to prevent the intrusion of ministers on unwilling parishioners, and to restore the importance of the congregational 'call'. But the effect of the act was to polarise positions in the church, and set it on a collision course with the state.

The first test came with the Auchterarder case of 1834. The parish of Auchterarder unanimously rejected the patron's nominee – and the Presbytery refused to proceed with his ordination and induction. The rejected individual, Robert Young, appealed to the Court of Session which, in 1838, by an 8–5 majority, held that in passing the Veto Act, the Church had acted ultra vires, and had infringed the statutory rights of patrons. If that had been all, then the Church might have rescinded the Act, but the Court of Session went on to rule that the established Church was a creation of the State and derived its legitimacy by Act of Parliament. This directly contradicted the Church's Confession of Faith and its own self-understanding. As Burleigh puts it 'The notion of the Church as an independent community governed by its own officers and capable of entering into a compact with the state was repudiated' (p. 342). The question now moved from the issue of patronage, to the issue of the Church's spiritual independence. An appeal to the House of Lords was rejected.

Other cases exacerbated the problem. The Presbytery of Dunkeld was summoned before the Court of Session for proceeding with an ordination despite a court interdict. In 1839, the General Assembly suspended seven ministers from Strathbogie for proceeding with an induction in Marnoch in defiance of Assembly orders. In 1841, the seven were deposed for acknowledging the superiority of the secular court in spiritual matters.

In response to the threat, the Evangelicals presented to parliament a Claim, Declaration and Protest anent the Encroachments of the Court of Session. It recognised the jurisdiction of the civil courts over the endowments given by the state to the established Church, but resolved to give up these privileges rather than see the 'Crown Rights of the Redeemer' (i.e. the spiritual independence of the church) compromised.[2] This was rejected in January 1843, leading to the Disruption in May of that year. 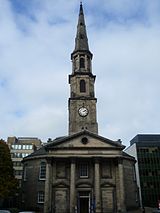 On 18 May 1843, 121 ministers and 73 elders led by Dr David Welsh, the retiring Moderator, left the Church of Scotland General Assembly at the Church of St. Andrew in George Street, Edinburgh, to form the Free Church of Scotland. After Dr Welsh read a Protest, they walked out and down the hill to the Tanfield Hall at Canonmills where their first meeting, the Disruption Assembly, was then held with Thomas Chalmers the first Moderator. A further meeting was held on 23 May for the Signing of the Act of Separation by the ministers. Eventually 474 of the about 1200 ministers adhered.

In leaving the established Church, however, they did not reject the principle of establishment. As Chalmers declared 'Though we quit the Establishment, we go out on the Establishment principle; we quit a vitiated Establishment but would rejoice in returning to a pure one. We are advocates for a national recognition of religion – and we are not voluntaries.'

Perhaps a third of the Evangelicals, the 'Middle party', remained within the established Church – wishing to preserve its unity. But for those who left, the issue was clear. It was not the democratising of the Church (although concern with power for ordinary people was a movement sweeping Europe at the time), but whether the Church was sovereign within its own domain. Jesus Christ and not the King or Parliament was to be its sole head. The Disruption was basically a spiritual phenomenon – and for its proponents it stood in a direct line with the Reformation and the National Covenants. 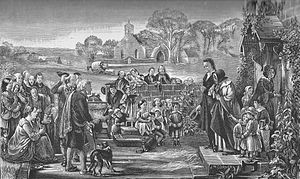 A minister and his family leaving their Church of Scotland manse during the Disruption.

Splitting the Church had major implications. Those who left forfeited livings, manses and pulpits, and had, without the aid of the establishment, to found and finance a national Church from scratch. This was done with remarkable energy, zeal and sacrifice. Another implication was that the church they left was more tolerant of doctrinal views.

Most of the principles on which the protesters went out were conceded by Parliament by 1929, clearing the way for the re-union of that year, but the national Church of Scotland never fully regained its position after the schism.

Hill & Adamson took photographic portraits of all the clergymen who had been at the assembly.

The painter David Octavius Hill was present at the Disruption Assembly and decided to record the scene. He received encouragement from another spectator, the physicist Sir David Brewster who suggested using the new invention, photography, to get likenesses of all the ministers present, and introduced Hill to the photographer Robert Adamson. Subsequently a series of photographs were taken of those who had been present, and the 5-foot x 11-foot 4 inches (1.53m x 3.45m) painting was eventually completed in 1866. It includes some associated with the Disruption but not ministers or elders. The partnership that developed between Hill and Adamson pioneered the art of photography in Scotland.