Dissolution of the union between Norway and Sweden

From Infogalactic: the planetary knowledge core
Jump to: navigation, search
"Norway in 1905" redirects here. For the years in Norway article, see 1905 in Norway. 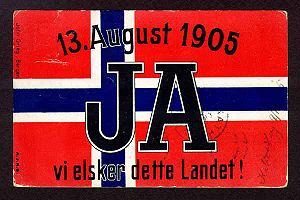 The dissolution of the union (Bokmål: Unionsoppløsningen; Nynorsk: Unionsoppløysinga; Swedish: Unionsupplösningen) between the kingdoms of Norway and Sweden was set in motion by a resolution of the Norwegian Parliament (the Storting), under the House of Bernadotte, on 7 June 1905. Following some months of tension and fear of war between the neighbouring nations – and a Norwegian plebiscite held on 13 August which overwhelmingly backed dissolution – negotiations between the two governments led to Sweden's recognition of Norway as an independent constitutional monarchy on 26 October 1905. On that date, King Oscar II renounced his claim to the Norwegian throne, effectively dissolving the United Kingdoms of Sweden and Norway, and this event was swiftly followed, on 18 November, by the accession to the Norwegian throne of Prince Carl of Denmark, taking the name of Haakon VII.

Norwegian nationalistic aspirations in 1814 were frustrated by Sweden's victory in a brief, but decisive war that resulted in Norway entering into a personal union with Sweden. The Norwegian constitution was largely kept intact, allowing for an independent Norwegian state with its own parliament, judiciary, and executive powers. Foreign relations were, however, conducted by the King through the Swedish ministry of foreign affairs. There were largely feelings of goodwill between the two peoples, and the common Kings generally tried to act in the interest of both Kingdoms.

However over the years, a divergence of Norwegian and Swedish interests became apparent. In particular, Norwegians felt that their foreign policy interests were inadequately served by Sweden's ministry of foreign affairs. There were several driving factors behind the growing conflict:

In addition, Norwegian politics were increasingly dominated by liberal tendencies characterized by the extension of parliamentary democracy, whereas Swedish politics tended to be more conservative, with the king continuing to exercise greater discretionary political power.

When free trade between the two countries was restricted in 1895 through the abolition of the "Interstate laws" (Mellomrikslovene), the economic reasons for the continued union were also diminished.

The conflict came to a head over the so-called "consul affair," in which successive Norwegian governments insisted that Norway should establish its own consular offices abroad, rather than rely on the common consulates appointed by the Swedish foreign minister. As the long-standing practice for the conduct of joint foreign policy had been that a Swede always hold the office of foreign minister, the Swedish government and king opposed this insistence, seeing it as a rejection of the throne's right to set foreign policy.

While Norway's Liberal Party had pioneered an uncompromising position through the so-called "fist policy," the Conservative Party also came to adopt a strong policy in favour of at least de facto independence and equality within the personal union. Although both parties made efforts to resolve the issue through negotiations, Norwegian public opinion became gradually more entrenched.

Both Sweden and Norway increased their military expenditure, and Norway modernized the frontier forts at Kongsvinger and Fredriksten and built a series of new military strongholds along its border with Sweden.

In early 1905, Christian Michelsen formed a coalition government consisting of liberals and conservatives, whose only stated objective was to establish a separate Norwegian corps of consuls. The law was passed by the Norwegian parliament. As expected and probably as planned, King Oscar II refused to accept the laws, and the Michelsen government resigned. When the king declared himself unable to form a cabinet under the present circumstances, a constitutional crisis broke out on 7 June 1905. Later that day, the Storting voted unanimously to dissolve the union with Sweden, taking the line that Oscar had effectively abandoned his role as King of Norway by refusing to appoint a replacement government. Norway considers 7 June to be the date that it regained its independence, even though Norway had possessed the legal status of an independent state since 1814.

The text of the unanimous declaration, remarkable for the fact that the declaration of the dissolution was an aside to the main clause, read:

Since all the members of the cabinet have resigned their positions; since His Majesty the King has declared his inability to obtain for the country a new government; and since the constitutional monarchy has ceased to exist, the Storting hereby authorizes the cabinet that resigned today to exercise the powers held by the King in accordance with the Constitution of Norway and relevant laws - with the amendments necessitated by the dissolution of the union with Sweden under one King, resulting from the fact that the King no longer functions as a Norwegian King.

Initially reacting to this declaration as a rebellious act, the Swedish government indicated an openness to a negotiated end to the union, insisting among other things on a Norwegian plebiscite. However, the Norwegian government had anticipated this, and had already scheduled a plebiscite for 13 August—thus avoiding the appearance that it had been called in response to demands from Sweden.

Besides internal changes within Norway, a major key factor that allowed Norway to break from Sweden was the emerging Swedish social democratic movement. In the early years of the 20th century, Hjalmar Branting led the Social Democrats in opposing a war to keep Norway united with Sweden. When the crisis came in 1905, he coined the slogan "Hands off Norway, King!" The Social Democrats organized resistance to a call-up of reserves and a general strike against a war. Basically, the majority of Sweden supported a free state of Norway as much as the people of Norway did.

The plebiscite was held on 13 August and resulted in an overwhelming 368,208 votes (99.95%) in favour of confirming the dissolution of the union against only 184 (0.05%) opposed. It is one of the most lopsided referenda in history.

The government thereby had confirmation of the dissolution. 85 percent of Norwegian men had cast their votes, but no women as universal suffrage was not extended to women until 1913. Norwegian feminists however collected 279,878 signatures in favour of dissolution.[1]

Polar explorer Fridtjof Nansen weighed in heavily for dissolving the union and travelled to the United Kingdom, where he successfully lobbied for British support for Norway's independence movement. 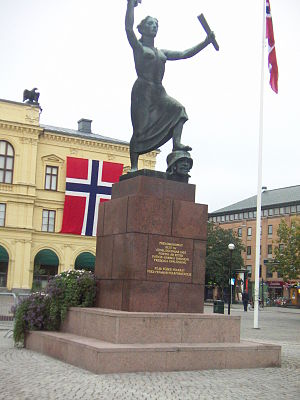 Peace monument in Karlstad, erected on the city square on the 50th anniversary of the dissolution of the union between Norway and Sweden

On 31 August, Norwegian and Swedish delegates met in the Swedish city of Karlstad to negotiate the terms of the dissolution. Although many prominent right-wing Swedish politicians favoured a hard-line approach to the issue, historical scholars have found that the Swedish King had determined early on that it would be better to lose the union than risk a war with Norway. The overwhelming public support among Norwegians for independence had convinced the major European powers that the independence movement was legitimate, and Sweden feared it would be isolated by suppressing it; also, there was little appetite for creating additional ill will between the countries.[citation needed]

Even as the negotiations made progress, military forces were quietly deployed on both sides of the border between Sweden and Norway, though separated by 2 kilometres (1.24 miles). Public opinion among Norwegian leftists favoured a war of independence if necessary, even against Sweden's numerical superiority.

On 23 September, the negotiations closed. On 9 October the Norwegian parliament voted to accept the terms of the dissolution; on 13 October the Swedish parliament followed suit. Although Norway had considered the union with Sweden ended as of 7 June, Sweden formally recognised Norwegian independence on 26 October when King Oscar II renounced his and any of his descendants' claims to the Norwegian throne. 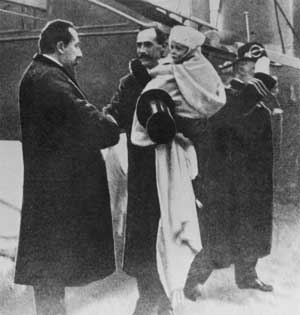 In its resolution of 7 June, the Storting had invited King Oscar II to allow one of his younger sons to assume the Norwegian throne, called the Bernadotte Offer. The offer was an attempt from the Norwegian government to demonstrate that their unilateral declaration of independence would not change the fact that Norway would remain a monarchy. In this way, Norway aimed to gather support from the other large European countries which, with the exception of France, were all hereditary monarchies.

Unlike the declaration of independence, the Bernadotte Offer was controversial in the Norwegian government. Five socialists in the parliament voted against a monarchy, and the finance minister Gunnar Knudsen, a republican member of the cabinet, resigned over this issue.

It was known that King Oscar II was not amenable to accepting the Bernadotte offer, but the issue remained unsettled until the offer was formally declined by the king when he renounced his claim on 26 October.[2]

The King's rejection of the Bernadotte offer had been anticipated months earlier, and already during the summer a Norwegian delegation approached the 33-year-old Prince Carl of Denmark, the second son of Crown Prince Frederick. The Norwegian parliament had considered other candidates but ultimately chose Prince Carl. He already had a son, two-year-old Alexander, to continue the line. More significantly, Carl was married to Maud, daughter of King Edward VII of the United Kingdom. By bringing in a British-born queen, it was hoped that Norway could court Britain's support.

Prince Carl impressed the delegation in many ways, not the least because of his sensitivity to the liberal and democratic movements that had led to Norway's independence. Though the Norwegian constitution stipulated that the Storting could choose a new king if the throne were vacant, Carl was aware that many Norwegians — including leading politicians and high-ranking military officers — favoured a republican form of government. Attempts to persuade the prince to accept the throne on the basis of Parliament's choice failed; Carl insisted that he would accept the crown only if the Norwegian people expressed their will for monarchy by referendum and if the parliament then elected him king. 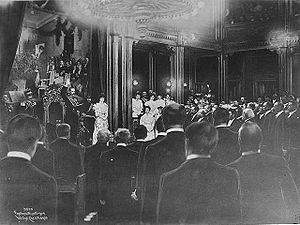 On 12 and 13 November, in the second constitutional plebiscite in three months, Norwegian voters decided by a nearly 79 percent majority (259,563 to 69,264) to establish a monarchy instead of a republic. Many who favoured a republic in principle voted for a monarchy because they felt it would help the newly independent Norwegian nation gain legitimacy among the European monarchies.

Following the November plebiscite affirming Norwegians' desire for a monarchy, the parliament by an overwhelming majority offered Carl a clear mandate to the Norwegian throne on 18 November, and the prince accepted the same evening, choosing the name Haakon, a traditional name used by Norwegian kings. The last king with that name was Haakon VI, who died in the year 1380.

Haakon VII was sworn in as king of Norway on 27 November.

The coronation of King Haakon VII and Queen Maud took place in Nidaros Cathedral in Trondheim on 22 June 1906. This was the last coronation held in Norway.

Important individuals in the dissolution

The following individuals played a role in the events surrounding the dissolution of the union between Norway and Sweden:

Importance of the events of 1905 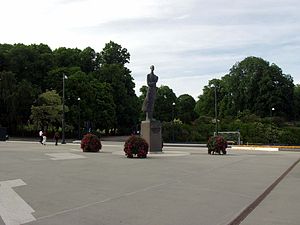 Much has been made of the supremacy of diplomacy in averting war between Sweden and Norway in 1905. In truth, the Norwegians had much more to fight for than the Swedes if it had come to war. Both parties recognized that their geographical proximity made long-term hostility untenable under any circumstance.

Many documents related to the specific events of 1905 were destroyed during and following those years. Some historians speculate[3] that foreign interests played a stronger role than what had previously been assumed; in particular, that Great Britain influenced the dissolution in order to reduce German influence over Atlantic ports. Although Sweden's close relationship with Germany did not last long, Norway's independence immediately put it inside the British sphere of influence.