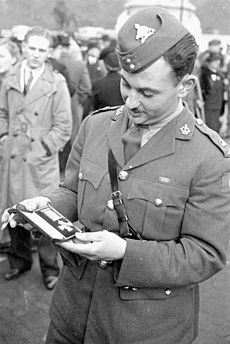 Major Marie-Edmond Paul Garneau, of the Royal 22e Régiment, with the Distinguished Service Order he received for "gallant and distinguished services in the combined attack on Dieppe" after his investiture at Buckingham Palace in October 1942.[4]

The Distinguished Service Order (DSO) is a military decoration of the United Kingdom, and formerly of other parts of the Commonwealth of Nations and British Empire, awarded for meritorious or distinguished service by officers of the armed forces during wartime, typically in actual combat.

Instituted on 6 September 1886 by Queen Victoria in a Royal Warrant published in the The London Gazette on 9 November,[5] the first DSOs awarded were dated 25 November 1886.[6] It is typically awarded to officers ranked major (or its equivalent) or higher, but the honour has sometimes been awarded to especially valorous junior officers. During the First World War, 8,981 DSOs were awarded, each award being announced in The London Gazette.

The order was established for rewarding individual instances of meritorious or distinguished service in war. It was a military order, until recently for officers only, and normally given for service under fire or under conditions equivalent to service in actual combat with the enemy, although it was awarded between 1914 and 1916 under circumstances which could not be regarded as under fire (often to staff officers, which caused resentment among front-line officers). After 1 January 1917, commanders in the field were instructed to recommend this award only for those serving under fire. Prior to 1943, the order could be given only to someone mentioned in despatches. The order is generally given to officers in command, above the rank of captain. A number of more junior officers were awarded the DSO, and this was often regarded as an acknowledgement that the officer had only just missed out on the award of the Victoria Cross.[7] In 1942, the award of the DSO was extended to officers of the Merchant Navy who had performed acts of gallantry while under enemy attack.[8]

Since 1993, its award has been restricted solely to distinguished service (i.e. leadership and command by any rank), with the Conspicuous Gallantry Cross being introduced as the second highest award for gallantry. It has, however, despite some very fierce campaigns in Iraq and Afghanistan, remained an officers-only award and it has yet to be awarded to a non-commissioned rank.[9]

Recipients of the order are officially known as Companions of the Distinguished Service Order. They are entitled to use the post-nominal letters "DSO". One or more gold medal bars ornamented by the Crown may be issued to DSO holders performing further acts of such leadership which would have merited award of the DSO. The bars are worn as clasps on the medal ribbon of the original award.[9]