From Infogalactic: the planetary knowledge core
(Redirected from Divan poetry)
Jump to: navigation, search
For other uses, see Diwan. 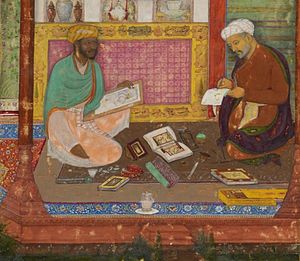 In Muslim cultures of the Middle East, North Africa, and South Asia, a Diwan (Persian: دیوان‎‎, divân, Arabic: ديوان‎‎, dīwān) is a collection of poems by one author, usually excluding his or her long poems (mathnawī).[1] These poems, frequently sung or set to music, were often composed and collected in the imperial courts of various sultanates and were very well known for their ability to inspire.

The English usage of the phrase "diwan poetry" comes from the Arabic word diwan (دیوان), which is loaned from Persian, and designated a list or register.[2] The Persian word derived from the Persian dibir meaning writer or scribe. Diwan was also borrowed into Armenian, Arabic, Urdu, Turkish.[1] In Persian, Turkish and other languages the term diwan came to mean a collection of poems by a single author, as in selected works, or the whole body of work of a poet. Thus Diwan-e Mir would be the Collected works of Mir Taqi Mir and so on. The first use of the term in this sense is attributed to Rudaki.

The term divan was used in titles of poetic works in French, beginning in 1697,[2] but was a rare and didactic usage, though one that was revived by its famous appearance in Goethe's West–östlicher Divan (Poems of West and East), a work published in 1819 that reflected the poet's abiding interest in Middle Eastern and specifically Persian literature.

This word has also been applied in a similar way to collections of Hebrew poetry and to poetry of al-Andalus. 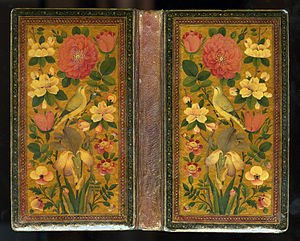 Rose and nightingale on the binding of a Divan of Hafiz (Iran, 1842)

Ottoman Divan poetry was a highly ritualized and symbolic art form. From the Persian poetry that largely inspired it, it inherited a wealth of symbols whose meanings and interrelationships—both of similitude (مراعات نظير mura'ât-i nazîr / تناسب tenâsüb) and opposition (تضاد tezâd)—were more or less prescribed. Examples of prevalent symbols that, to some extent, oppose one another include, among others:

Similarly, "the world" refers simultaneously to the physical world and to this physical world considered as the abode of sorrow and impermanence, while "the rosegarden" refers simultaneously to a literal garden and to the garden of Paradise. "The nightingale", or suffering lover, is often seen as situated—both literally and figuratively—in "the world", while "the rose", or beloved, is seen as being in "the rosegarden".[3]

Divan poetry was composed through the constant juxtaposition of many such images within a strict metrical framework, thus allowing numerous potential meanings to emerge. A brief example is the following line of verse, or mısra (مصراع), by the 18th-century judge and poet Hayatî Efendi:

Here, the nightingale is only implied (as being the poet/lover), while the rose, or beloved, is shown to be capable of inflicting pain with its thorns (خار hâr). The world, as a result, is seen as having both positive aspects (it is a rosegarden, and thus analogous to the garden of Paradise) and negative aspects (it is a rosegarden full of thorns, and thus different from the garden of Paradise).

As for the development of Divan poetry over the more than 500 years of its existence, that is—as the Ottomanist Walter G. Andrews points out—a study still in its infancy;[5] clearly defined movements and periods have not yet been decided upon. Early in the history of the tradition, the Persian influence was very strong, but this was mitigated somewhat through the influence of poets such as the Azerbaijani Nesîmî (?–1417?) and the Uyghur Ali Şîr Nevâî (1441–1501), both of whom offered strong arguments for the poetic status of the Turkic languages as against the much-venerated Persian. Partly as a result of such arguments, Divan poetry in its strongest period—from the 16th to the 18th centuries—came to display a unique balance of Persian and Turkish elements, until the Persian influence began to predominate again in the early 19th century.

Despite the lack of certainty regarding the stylistic movements and periods of Divan poetry, however, certain highly different styles are clear enough, and can perhaps be seen as exemplified by certain poets:

The vast majority of Divan poetry was lyric in nature: either gazels (which make up the greatest part of the repertoire of the tradition), or kasîdes. There were, however, other common genres, most particularly the mesnevî, a kind of verse romance and thus a variety of narrative poetry; the two most notable examples of this form are the Leylî vü Mecnun (ليلى و مجنون) of Fuzûlî and the Hüsn ü Aşk (حسن و عشق; "Beauty and Love") of Şeyh Gâlib.

In Urdu poetry diwan are also a collection of poems, but here they are mainly ghazals.[7]