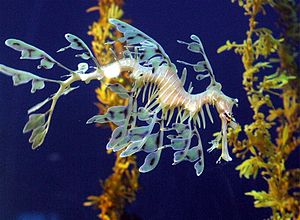 Fish come in many shapes and sizes. This is a sea dragon, a close relative of the seahorse. They are camouflaged to look like floating seaweed.[1][2][3] 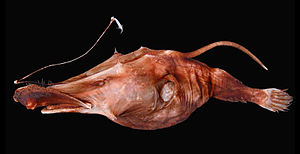 The deep sea Lasiognathus amphirhamphus is a rare ambush predator known only from a single female specimen (pictured).[4] It is an angler fish that "angles" for its prey with a lure attached to a line from its head.

Fish are very diverse animals and can be categorised in many ways. This article is an overview of some of ways in which fish are categorised. Although most fish species have probably been discovered and described, about 250 new ones are still discovered every year. According to FishBase, 33,100 species of fish had been described by April 2015.[5] That is more than the combined total of all other vertebrate species: mammals, amphibians, reptiles and birds.

Fish species diversity is roughly divided equally between marine (oceanic) and freshwater ecosystems. Coral reefs in the Indo-Pacific constitute the centre of diversity for marine fishes, whereas continental freshwater fishes are most diverse in large river basins of tropical rainforests, especially the Amazon, Congo, and Mekong basins. More than 5,600 fish species inhabit Neotropical freshwaters alone, such that Neotropical fishes represent about 10% of all vertebrate species on the Earth. Exceptionally rich sites in the Amazon basin, such as Cantão State Park, can contain more freshwater fish species than occur in all of Europe.[6]

Fish systematics is the formal description and organisation of fish taxa into systems. It is complex and still evolving. Controversies over "arcane, but important, details of classification are still quietly raging."[7]

The term "fish" describes any non-tetrapod chordate, (i.e., an animal with a backbone), that has gills throughout life and has limbs, if any, in the shape of fins.[8] Unlike groupings such as birds or mammals, fish are not a single clade but a paraphyletic collection of taxa, including jawless, cartilaginous and skeletal types.[9][10]

Jawless fish were the earliest fish to evolve. There is current debate over whether these are really fish at all. They have no jaw, no scales, no paired fins, and no bony skeleton. Their skin is smooth and soft to the touch, and they are very flexible. Instead of a jaw, they possess an oral sucker. They use this to fasten onto other fish, and then use their rasp-like teeth to grind through their host's skin into the viscera. Jawless fish inhabit both fresh and salt water environments. Some are anadromous, moving between both fresh and salt water habitats.

Extant jawless fish are either lamprey or hagfish. Juvenile lamprey feed by sucking up mud containing micro-organisms and organic debris. The lamprey has well-developed eyes, while the hagfish has only primitive eyespots. The hagfish coats itself and carcasses it finds with noxious slime to deter predators, and periodically ties itself into a knot to scrape the slime off. It is the only invertebrate fish and the only animal which has a skull but no vertebral column.[11] It has four hearts, two brains, and a paddle-like tail.[12]

There are over 980 species of cartilaginous fish. They include sharks, rays and chimaera.

Teleosts are the most advanced or "modern" fishes. They are overwhelmingly the dominant class of fishes (or for that matter, vertebrates) with nearly 30,000 species, covering about 96 percent of all extant fish species. They are ubiquitous throughout fresh water and marine environments from the deep sea to the highest mountain streams. Included are nearly all the important commercial and recreational fishes.[14]

Teleosts have a movable maxilla and premaxilla and corresponding modifications in the jaw musculature. These modifications make it possible for teleosts to protrude their jaws outwards from the mouth.[15][16] The caudal fin is homocercal, meaning the upper and lower lobes are about equal in size. The spine ends at the caudal peduncle, distinguishing this group from those in which the spine extends into the upper lobe of the caudal fin.[15]

Some of the shortest-lived species are gobies, which are small coral reef–dwelling fish. Some of the longest-lived are rockfish.

Boxfishes have heavily armoured plate-like scales fused into a solid, triangular, boxlike carapace, from which the fins, tail, eyes and mouth protrude. Because of this heavy armour, boxfish move slowly, but few other fish are able to eat the adults.[110]