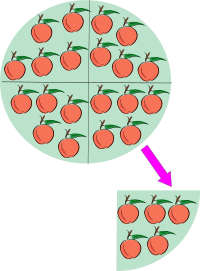 In mathematics, especially in elementary arithmetic, division (denoted ÷ or / or —) is an arithmetic operation. Specifically, if b times c equals a, written:

where b is not zero, then a divided by b equals c, written:

Conceptually, division of integers can be viewed in either of two distinct but related ways quotition and partition:

Teaching division usually leads to the concept of fractions being introduced to school pupils. Unlike addition, subtraction, and multiplication, the set of all integers is not closed under division. Dividing two integers may result in a remainder. To complete the division of the remainder, the number system is extended to include fractions or rational numbers as they are more generally called.

Division is often shown in algebra and science by placing the dividend over the divisor with a horizontal line, also called a fraction bar, between them. For example, a divided by b is written

This can be read out loud as "a divided by b", "a by b" or "a over b". A way to express division all on one line is to write the dividend (or numerator), then a slash, then the divisor (or denominator), like this:

This is the usual way to specify division in most computer programming languages since it can easily be typed as a simple sequence of ASCII characters. Some mathematical software, such as GNU Octave, allows the operands to be written in the reverse order by using the backslash as the division operator:

A typographical variation halfway between these two forms uses a solidus (fraction slash) but elevates the dividend, and lowers the divisor:

Any of these forms can be used to display a fraction. A fraction is a division expression where both dividend and divisor are integers (typically called the numerator and denominator), and there is no implication that the division must be evaluated further. A second way to show division is to use the obelus (or division sign), common in arithmetic, in this manner:

This form is infrequent except in elementary arithmetic. ISO 80000-2-9.6 states it should not be used. The obelus is also used alone to represent the division operation itself, as for instance as a label on a key of a calculator.

In some non-English-speaking cultures, "a divided by b" is written a : b. This notation was introduced in 1631 by William Oughtred in his Clavis Mathematicae and later popularized by Gottfried Wilhelm Leibniz.[2] However, in English usage the colon is restricted to expressing the related concept of ratios (then "a is to b").

In elementary classes of some countries, the notation

is used to denote a divided by b, especially when discussing long division; similarly, but less commonly,

for short division (as shown in an example on that page).[citation needed] This notation was first introduced by Michael Stifel in Arithmetica integra, published in 1544.[2]

Division is often introduced through the notion of "sharing out" a set of objects, for example a pile of sweets, into a number of equal portions. Distributing the objects several at a time in each round of sharing to each portion leads to the idea of "chunking", i.e., division by repeated subtraction.

More systematic and more efficient (but also more formalised and more rule-based, and more removed from an overall holistic picture of what division is achieving), a person who knows the multiplication tables can divide two integers using pencil and paper using the method of short division, if the divisor is simple. Long division is used for larger integer divisors. If the dividend has a fractional part (expressed as a decimal fraction), one can continue the algorithm past the ones place as far as desired. If the divisor has a fractional part, we can restate the problem by moving the decimal to the right in both numbers until the divisor has no fraction.

A person can calculate division with an abacus by repeatedly placing the dividend on the abacus, and then subtracting the divisor the offset of each digit in the result, counting the number of divisions possible at each offset.

A person can use logarithm tables to divide two numbers, by subtracting the two numbers' logarithms, then looking up the antilogarithm of the result.

By computer or with computer assistance

In modular arithmetic, some numbers have a multiplicative inverse with respect to the modulus. We can calculate division by multiplication in such a case. This approach is useful in computers that do not have a fast division instruction.

Division is right-distributive over addition and subtraction. That means:

in the same way as in multiplication

. But division is not left-distributive, i.e. we have

The Euclidean division is the mathematical formulation of the outcome of the usual process of division of integers. It asserts that, given two integers, a, the dividend, and b, the divisor, such that b ≠ 0, there are unique integers q, the quotient, and r, the remainder, such that a = bq + r and 0 ≤ r < | b |, where | b | denotes the absolute value of b.

Division of integers is not closed. Apart from division by zero being undefined, the quotient is not an integer unless the dividend is an integer multiple of the divisor. For example, 26 cannot be divided by 11 to give an integer. Such a case uses one of five approaches:

Dividing integers in a computer program requires special care. Some programming languages, such as C, treat integer division as in case 5 above, so the answer is an integer. Other languages, such as MATLAB and every computer algebra system return a rational number as the answer, as in case 3 above. These languages also provide functions to get the results of the other cases, either directly or from the result of case 3.

Names and symbols used for integer division include div, /, \, and %. Definitions vary regarding integer division when the dividend or the divisor is negative: rounding may be toward zero (so called T-division) or toward −∞ (F-division); rarer styles can occur – see Modulo operation for the details.

Divisibility rules can sometimes be used to quickly determine whether one integer divides exactly into another.

All four quantities are integers, and only p may be 0. This definition ensures that division is the inverse operation of multiplication.

Division of two real numbers results in another real number when the divisor is not 0. It is defined such a/b = c if and only if a = cb and b ≠ 0.

Division of any number by zero (where the divisor is zero) is undefined. This is because zero multiplied by any finite number always results in a product of zero. Entry of such an expression into most calculators produces an error message.

Division for complex numbers expressed in polar form is simpler than the definition above:

Again all four quantities p, q, r, s are real numbers, and r may not be 0.

One can define the division operation for polynomials in one variable over a field. Then, as in the case of integers, one has a remainder. See Euclidean division of polynomials, and, for hand-written computation, polynomial long division or synthetic division.

One can define a division operation for matrices. The usual way to do this is to define A / B = AB−1, where B−1 denotes the inverse of B, but it is far more common to write out AB−1 explicitly to avoid confusion.

Because matrix multiplication is not commutative, one can also define a left division or so-called backslash-division as A \ B = A−1B. For this to be well defined, B−1 need not exist, however A−1 does need to exist. To avoid confusion, division as defined by A / B = AB−1 is sometimes called right division or slash-division in this context.

To avoid problems when A−1 and/or B−1 do not exist, division can also be defined as multiplication with the pseudoinverse, i.e., A / B = AB+ and A \ B = A+B, where A+ and B+ denote the pseudoinverse of A and B.

In abstract algebras such as matrix algebras and quaternion algebras, fractions such as

are typically defined as

is presumed an invertible element (i.e., there exists a multiplicative inverse

is the multiplicative identity). In an integral domain where such elements may not exist, division can still be performed on equations of the form

by left or right cancellation, respectively. More generally "division" in the sense of "cancellation" can be done in any ring with the aforementioned cancellation properties. If such a ring is finite, then by an application of the pigeonhole principle, every nonzero element of the ring is invertible, so division by any nonzero element is possible in such a ring. To learn about when algebras (in the technical sense) have a division operation, refer to the page on division algebras. In particular Bott periodicity can be used to show that any real normed division algebra must be isomorphic to either the real numbers R, the complex numbers C, the quaternions H, or the octonions O.