Diwani is a calligraphic variety of Arabic script, a cursive style developed during the reign of the early Ottoman Turks (16th century - early 17th century). It was invented by Housam Roumi and reached its height of popularity under Süleyman I the Magnificent (1520–1566).

It was labeled the Diwani script because it was used in the Ottoman diwan and was one of the secrets of the sultan's palace. The rules of this script were not known to everyone, but confined to its masters and a few bright students. It was used in the writing of all royal decrees, endowments, and resolutions.

The Diwani script is divided into two types:

1. The Riq`a Diwani style, which is devoid of any decorations and whose lines are straight, except for the lower parts of the letters.

2. The Jeli Diwani or clear style. This kind of handwriting is distinguished by the intertwining of its letters and its straight lines from top to bottom. It is punctuated and decorated to appear as one piece. The Diwani handwriting is known for the intertwining of its letters, which makes it very difficult to read or write, and difficult to forge. 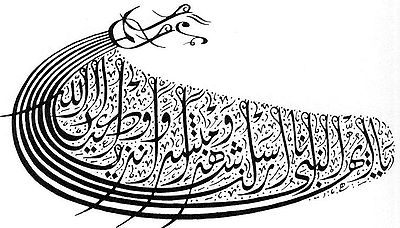 Diwani is marked by beauty and harmony, and accurate small samples are considered more beautiful than larger ones. It is still used in the correspondence of kings, princes, presidents, and in ceremonies and greeting cards. and has a high artistic value.