From Infogalactic: the planetary knowledge core
(Redirected from Dixiecrats)
Jump to: navigation, search
Not to be confused with Southern Party.

The States' Rights Democratic Party (usually called the Dixiecrats) was a short-lived segregationist political party in the United States in 1948. It originated as a breakaway faction of the Democratic Party in 1948, determined to protect what they portrayed as the southern way of life beset by an oppressive federal government,[1] and supporters assumed control of the state Democratic parties in part or in full in several Southern states. The States' Rights Democratic Party opposed racial integration and wanted to retain Jim Crow laws and white supremacy in the face of possible federal intervention. Members were called Dixiecrats. (The term Dixiecrat is a portmanteau of Dixie, referring to the Southern United States, and Democrat.)

The party did not run local or state candidates, and after the 1948 election its leaders generally returned to the Democratic Party.[2] The Dixiecrats had little short-run impact on politics. However, they did have a long-term impact. The Dixiecrats began the weakening of the "Solid South" (the Democratic Party's total control of presidential elections in the South).[3]

The term "Dixiecrat" is sometimes used by Northern Democrats to refer to conservative Southern Democrats from the 1940s to the 1990s, regardless of where they stood in 1948.[4]

By the 1870s the South was heavily Democratic in national and presidential elections, apart from pockets of Republican strength. It was the "Solid South". The social system was based on Jim Crow, a combination of legal and informal segregation that made blacks second-class citizens with little or no political power anywhere in the South.[5]

In the 1930s, the New Deal under President Franklin D. Roosevelt, a realignment occurred. Much of the Democratic Party in the South shifted towards economic intervention. Civil rights for blacks was not on the New Deal agenda, as Southerners controlled the key positions of power in Congress. Jim Crow was indirectly challenged as two million blacks served in the military during World War II, receiving equal pay in segregated units, and equally entitled to veterans' benefits. The Republican Party, nominating Governor of New York Thomas E. Dewey in 1944 and 1948, supported civil rights legislation that the Southern Democrats in Congress almost unanimously opposed.[6][7] 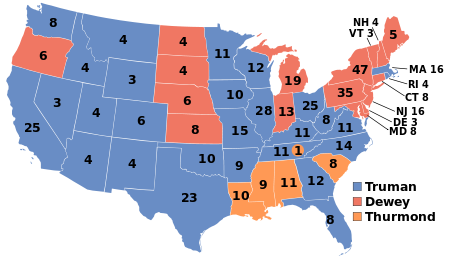 When Roosevelt died, the new president Harry Truman established a highly visible President's Committee on Civil Rights and ordered an end to discrimination in the military in 1948. As group of Southern governors such as Strom Thurmond of South Carolina and Fielding L. Wright of Mississippi met to consider the place of Southerners within the Democratic Party. After a tense meeting with DNC chairman and Truman confidant J. Howard McGrath, the Southern governors agreed to convene their own convention in Birmingham if Truman and civil rights supporters emerged victorious at the 1948 Democratic National Convention.[8] In July, the convention re-nominated Truman and adopted a plank proposed by Northern liberals led by Hubert Humphrey calling for civil rights; 35 southern delegates walked out. The move was on to remove Truman's name from the ballot in the South.

This required a new party, which the Southern defectors chose to name the States' Rights Democratic Party. Just days after the Democratic convention, the Dixiecrats held their own convention at Municipal Auditorium in Birmingham, Alabama on July 17.[9] While several leaders from the Deep South such as Strom Thurmond and James Eastland attended, most major Southern Democrats did not attend the conference.[10] Among those absent were Georgia Senator Richard Russell, Jr., who had finished with the second most delegates in the Democratic presidential ballot.[10] Prior to the convention, it was not clear whether the Dixiecrats would seek to field their own candidate or simply try to prevent Southern electors from voting for Truman.[10] Many in the press predicted that if the Dixiecrats did nominate a ticket, Arkansas Governor Benjamin Travis Laney would be the presidential nominee and South Carolina Governor Strom Thurmond or Mississippi Governor Fielding L. Wright would be the vice presidential nominee.[10] Laney traveled to Birmingham during the convention, but he ultimately decided that he did not want to join a third party and remained in his hotel during the convention.[10] Thurmond himself had doubts about a third-party bid, but party organizers convinced him to accept the party's nomination, with Fielding Wright as his running mate.[10] Wright's supporters had hoped that Wright would lead the ticket, but Wright deferred to Thurmond, who had greater national stature.[10] The selection of Thurmond received fairly positive reviews from the national press, as Thurmond had pursued relatively moderate policies on civil rights and did not employ the fiery rhetoric used by other segregationist leaders.[11]

The Dixiecrats did not declare themselves a new third party, but rather said that they were only "recommending" that state Democratic Parties vote for the Thurmond-Wright ticket.[10] The goal of the party was to win the 127 electoral votes of the Solid South in the hopes of throwing the election to the Representatives.[10] Once in the House, the Dixiecrats hoped to throw their support to whichever party would agree to their segregationist demands.[10] Even if the Republicans won an outright majority of electoral votes (as many expected in 1948), the Dixiecrats hoped that their third-party run would help the South retake its dominant position in the Democratic Party.[10] In implementing their strategy, the Dixiecrats faced a complicated set of state election laws, with different states having different processes for choosing presidential electors.[10] The Dixiecrats succeeded in making the Thurmond-Wright ticket the official Democratic ticket in Alabama, Louisiana, Mississippi, and South Carolina.[12] In other states, they were forced to run as a third-party ticket.[13]

In numbers greater than the 6,000 that attended the first, the Dixiecrats held a boisterous second convention in Oklahoma City, on August 14, 1948,[14] where they adopted their party platform which stated:[15]

We stand for the segregation of the races and the racial integrity of each race; the constitutional right to choose one's associates; to accept private employment without governmental interference, and to earn one's living in any lawful way. We oppose the elimination of segregation, the repeal of miscegenation statutes, the control of private employment by Federal bureaucrats called for by the misnamed civil rights program. We favor home-rule, local self-government and a minimum interference with individual rights.

We call upon all Democrats and upon all other loyal Americans who are opposed to totalitarianism at home and abroad to unite with us in ignominiously defeating Harry S. Truman, Thomas E. Dewey and every other candidate for public office who would establish a Police Nation in the United States of America.

In Arkansas, Democratic gubernatorial nominee Sid McMath vigorously supported Truman in speeches across the state, much to the consternation of the sitting governor, Benjamin Travis Laney, an ardent Thurmond supporter. Laney later used McMath's pro-Truman stance against him in the 1950 gubernatorial election, but McMath won re-election handily.

Efforts by Dixiecrats to paint other Truman loyalists as turncoats generally failed, although the seeds of discontent were planted which in years to come took their toll on Southern moderates.

On election day 1948, the Thurmond-Wright ticket carried the previously solid Democratic states of Alabama, Louisiana, Mississippi, and South Carolina, receiving 1,169,021 popular votes and 39 electoral votes. Progressive Party nominee Henry A. Wallace drew off a nearly equal number of popular votes (1,157,172) from the Democrats' left wing, although he did not carry any states. The splits in the Democratic Party in the 1948 election had been expected to produce a victory by GOP nominee Dewey, but Truman defeated Dewey in an upset victory.

The States' Rights Democratic Party dissolved after the 1948 election, as Truman, the Democratic National Committee, and the New Deal Southern Democrats acted to ensure that the Dixiecrat movement would not return in the 1952 presidential election. Some Southern diehards, such as Leander Perez of Louisiana, attempted to keep it in existence in their districts.[16] Former Dixiecrats received some backlash at the 1952 Democratic National Convention, but all Southern delegations were seated after agreeing to a party loyalty pledge.[17] Moderate Alabama Senator John Sparkman was selected as the Democratic vice presidential nominee in 1952, helping to boost party loyalty in the South.[17] Regardless of the power struggle within the Democratic Party concerning segregation policy, the South remained a strongly Democratic voting bloc for local, state, and federal Congressional elections, but not in presidential elections.