From Infogalactic: the planetary knowledge core
(Redirected from Dmitri Donskoi)
Jump to: navigation, search
For other uses, see Donskoy (disambiguation).

Saint Dmitry Ivanovich Donskoy (Russian: Дми́трий Ива́нович Донско́й,also known as Dimitrii or Demetrius), or Dmitry of the Don, sometimes referred to simply as Dmitry (12 October 1350 in Moscow – 19 May 1389 in Moscow), son of Ivan II the Meek of Moscow (1326–1359), reigned as the Prince of Moscow from 1359 and Grand Prince of Vladimir from 1363 to his death. He was the first prince of Moscow to openly challenge Mongol authority in Russia. His nickname, Donskoy (i.e., "of the Don"), alludes to his great victory against the Tatars in the Battle of Kulikovo (1380) which took place on the Don River.[1] He is venerated as a Saint in the Orthodox Church with his feast day on 19 May.[2][3] 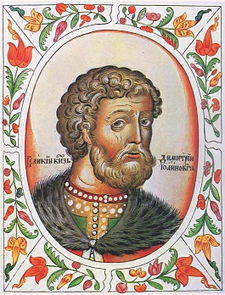 Dmitry ascended the throne of the Principality of Moscow at the age of 9. During his minority, Russia's Metropolitan Aleksey ran the government. In 1360 ru , Khan of the Golden Horde, transferred the title most prized among Russian princes, that of Grand Prince of Vladimir, to Dmitry Konstantinovich of Nizhniy Novgorod. In 1363, after that prince was deposed, Dmitry Ivanovich was crowned at Vladimir. Three years later, he made peace with Dmitriy Konstantinovich and married his daughter Eudoxia. In 1376 their joint armies ravaged Volga Bulgaria.

The most important event during Dmitry's early reign was start of building the Moscow Kremlin: it was completed in 1367. Thanks to the new fortress, the city withstood two sieges by Algirdas of Lithuania during the Lithuanian–Muscovite War (1368–72). The war ended with the Treaty of Lyubutsk. In 1375, Dmitry settled, in his own favor, a conflict with Mikhail II of Tver over Vladimir. Other princes of Northern Russia acknowledged his authority and contributed troops to the impending struggle against the Horde. By the end of his reign, Dmitry had more than doubled the territory of the Principality of Moscow. 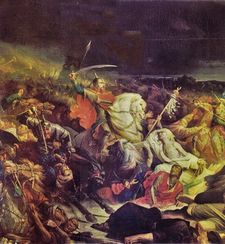 Dmitriy Donskoy in the Battle of Kulikovo 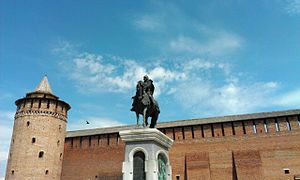 Dmitry's thirty-year reign saw the beginning of the end for Mongol domination of parts of what is now Russia. The Golden Horde was severely weakened by civil war and dynastic rivalries. Dmitry took advantage of this lapse in Mongol authority to openly challenge the Tatars.

While he kept the Khan's patent to collect taxes for all of Russia, Dmitry is also famous for leading the first Russian military victory over the Mongols. Mamai, a Mongol general and claimant to the throne, tried to punish Dmitry for attempting to increase his power. In 1378 Mamai sent a Mongol army, but it was defeated by Dmitry's forces in the Battle of Vozha River. Two years later Mamai personally led a large force against Moscow. Dmitry met and defeated it at the Battle of Kulikovo. 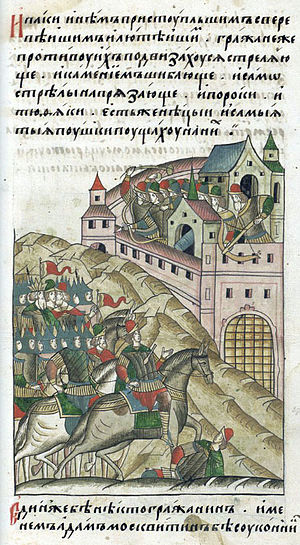 Defense of Moscow from Tokhtamysh in 1382

The defeated Mamai was presently dethroned by a rival Mongol general, Tokhtamysh. That khan reasserted Mongol rule over parts of what now is Russia and overran Moscow for Dmitry's resistance to Mamai. Dimitry, however, pledged his loyalty to Tokhtamysh and to the Golden Horde and was reinstated as Mongol principal tax collector and Grand Duke of Vladimir. Upon his death in 1389, Dimitry was the first Grand Duke to bequeath his titles to his son Vasiliy without consulting the Khan. 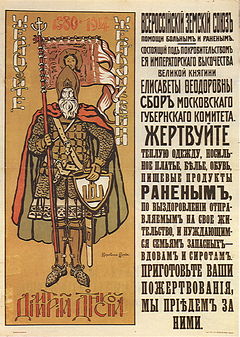 He was married to Eudoxia of Nizhniy Novgorod. She was a daughter of Dmitry of Suzdal and Vasilisa of Rostov. They had at least twelve children: