From Infogalactic: the planetary knowledge core
Jump to: navigation, search
For other uses, see Dobro (disambiguation).

The word Dobro is, in popular usage, the generic term for a wood-bodied, single cone resonator guitar. It is also an American brand of resonator guitar, currently owned by the Gibson Guitar Corporation. The Dobro was originally made by the Dopyera brothers when they formed the Dobro Manufacturing Company. Their design, with a single inverted resonator, was introduced in competition to the patented Tricone and biscuit designs produced by the National String Instrument Corporation. The Dobro name appeared on other instruments, notably electric lap steel guitars and solid body electric guitars and on other resonator instruments such as Safari resonator mandolins.

Gibson Guitar Corporation acquired the Dobro trademark[2] in 1994. Although the name Dobro is generically associated with the single-inverted-cone design, Gibson has announced that it would defend its right to exclusively use the name. 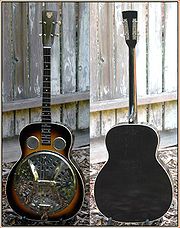 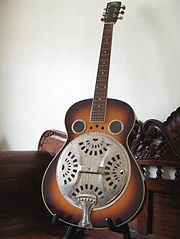 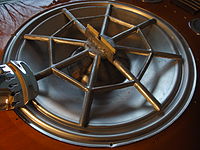 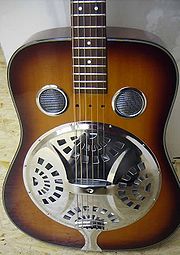 Dobro-style resonator guitar made by Hohner.

The name originated in 1928 when the Dopyera brothers, John and Emil (Ed), formed the Dobro Manufacturing Company. "Dobro" is both a contraction of "Dopyera brothers" and a word meaning "goodness" or goodwill in their native Slovak (and also in most Slavic languages). An early company motto was "Dobro means good in any language."

The Dobro was the third resonator guitar design by John Dopyera, the inventor of the resonator guitar, but the second to enter production. Unlike his earlier tricone design, the Dobro had a single resonator cone and it was inverted, with its concave surface facing up. The Dobro company described this as a bowl shaped resonator.

The Dobro was louder than the tricone and cheaper to produce. In Dopyera's opinion, the cost of manufacture had priced the resonator guitar beyond the reach of many players. His failure to convince his fellow directors at the National String Instrument Corporation to produce a single-cone version was part of his motivation for leaving.

Since National had applied for a patent on the single cone (U.S. Patent 1,808,756), Dopyera had to develop an alternative design. He did this by inverting the cone so that, rather than having the strings rest on the apex of the cone as the National method did, they rested on a cast aluminum spider that had eight legs sitting on the perimeter of the downward-pointing cone (U.S. Patent 1,896,484).

In the following years both Dobro and National built a wide variety of metal- and wood-bodied single-cone guitars, while National also continued with the Tricone for a time. Both companies sourced many components from National director Adolph Rickenbacher, and John Dopyera remained a major shareholder in National. By 1934, the Dopyera brothers had gained control of both National and Dobro, and they merged the companies to form the National-Dobro Corporation.

From the outset, wooden bodies had been sourced from existing guitar manufacturers, particularly the plywood student guitar bodies made by the Regal Musical Instrument Company. Dobro had granted Regal a license to manufacture resonator instruments. By 1937, it was the only manufacturer, and the license was officially made exclusive. Regal continued to manufacture and sell resonator instruments under many names, including Regal, Dobro, Old Kraftsman, and Ward. However, they ceased all resonator guitar production following the United States entry into World War II in 1941.

Emil Dopyera (also known as Ed Dopera) manufactured Dobros from 1959 under the brand name Dopera's Original before selling the company and name to Semie Moseley. Moseley merged it with his Mosrite guitar company and manufactured Dobros for a time. Meanwhile, in 1967, Rudy and Emil Dopyera formed the Original Musical Instrument Company (OMI) to manufacture resonator guitars, which they at first branded Hound Dog. However, in 1970, they again acquired the Dobro name—Mosrite having gone into temporary liquidation.

The Gibson Guitar Corporation acquired OMI in 1993, along with the Dobro name. They renamed the company Original Acoustic Instruments and moved production to Nashville. Gibson now uses the name Dobro only for models with the inverted-cone design that the original Dobro Manufacturing Company used. Gibson also carries biscuit-style single-resonator guitars, but it sells them under names such as "Hound Dog" (through its subsidiary Epiphone).[1] The Dobro was first introduced to country music by Roy Acuff.

Gibson now restricts the use of the name Dobro to its own product line. The name is still used generically for any resonator guitar, particularly before 1993 or from outside the US. Dobro and dobroist may not necessarily refer to a Gibson Dobro in such songs as The Ballad of Curtis Loew by Lynyrd Skynyrd, Valium Waltz by the Old 97's, When Papa Played the Dobro by Johnny Cash on the Ride This Train album, or Gold Dust Woman by Fleetwood Mac from the album Rumours.

As of 2006[update], many makers, including Gibson, were manufacturing resonator guitars similar to the original inverted-cone design. Gibson also manufactures biscuit-style resonator guitars, but reserves the Dobro name for its inverted-cone models. These "biscuit" guitars are often used for blues and are played vertically instead of horizontally like a "spider" bridge.

In addition to modern versions of tricones and single cone resonators, National Resophonic also produce Dobro-style guitars. This company made the Model D during the latter part of the 2000s. Production of the Model D guitar has now ceased, but a few dealers in the UK and USA have stock available. National Resophonic are now producing their Smith & Young "Spider Cone" models and the Model 11 is built on traditional Dobro lines. Also, Goldtone, Paul Beard and a number of custom builders are producing good guitars.

As well as recreating the traditional sounds and look, resonator guitars have also become the foundation for even further developments in the world of guitars. Many Dobro-style guitars are now hybrid electric guitars, and some manufacturers add strings to create seven and eight-string resonator-style guitars.