From Infogalactic: the planetary knowledge core
Jump to: navigation, search
This article is about the leader of the Republic of Venice. For the meme, see Doge (meme).

The Doge of Venice (/ˈdoʊdʒ/; Venetian: Doxe de Venexia [ˈdɔːze de veˈnɛzja]; Italian: Doge di Venezia [ˈdɔːdʒe di veˈnɛttsja]; all derived from Latin dūx, "military leader"), sometimes translated as Duke (cf. Italian Duca), was the chief magistrate and leader of the Most Serene Republic of Venice for over a thousand years. Doges of Venice were elected for life by the city-state's aristocracy. Commonly the man selected as Doge was the shrewdest elder in the city. The doge was not a duke in the modern sense, nor was a doge the equivalent of a hereditary duke. The title "doge" was the title of the senior-most elected official of Venice and Genoa; both cities were republics and elected doges. A doge was referred to variously by the titles "My Lord the Doge" (Monsignor el Doxe), "Most Serene Prince" (Serenissimo Principe), and "His Serenity" (Sua Serenità). 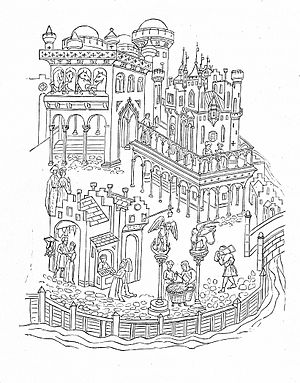 According to the chronicler John the Deacon, author of the Chronicon Venetum ("Chronicle of Venice"), written about AD 1000, the office of the Doge was first instituted in Venice about 700, replacing tribunes that had led the cluster of early settlements in the lagoon. Whether or not the first doges were technically local representatives of the Emperor of Constantinople, the doge, like the emperor, held office for life and was similarly regarded as the ecclesiastical, the civil and the military leader, in a power structure termed caesaropapism.[1]

Selection of the Doge

The doge's prerogatives were not defined with precision, and though the position was entrusted to members of the inner circle of powerful Venetian families, after several doges had associated a son with themselves in the ducal office, this tendency towards a hereditary monarchy was checked by a law which decreed that no doge had the right to associate any member of his family with himself in his office, or to name his successor.[1] After 1172 the election of the doge was finally entrusted to a committee of forty, who were chosen by four men selected from the Great Council of Venice, which was itself nominated annually by twelve persons. After a deadlocked tie at the election of 1229, the number of electors was increased from forty to forty-one.[2]

New regulations for the elections of the doge introduced in 1268 remained in force until the end of the republic in 1797. Their object was to minimize as far as possible the influence of individual great families, and this was effected by a complex elective machinery. Thirty members of the Great Council, chosen by lot, were reduced by lot to nine; the nine chose forty and the forty were reduced by lot to twelve, who chose twenty-five. The twenty-five were reduced by lot to nine and the nine elected forty-five. Then the forty-five were once more reduced by lot to eleven, and the eleven finally chose the forty-one who actually elected the doge.[1] None could be elected but by at least twenty-five votes out of forty-one, nine votes out of eleven or twelve, or seven votes out of nine electors.[3] A detailed description of this process, and the ceremonial procession that followed, is preserved in Martin Da Canale's work Les Estoires de Venise (English translation by Laura K. Morreale, Padua 2009).

In a ceremonial formula for consulting the Venetians, when a new doge was chosen, before he took the oath of investiture he was presented to the people with the formula: "This is your doge, if it please you."[1] This practice came to an end in 1423, after the election of Francesco Foscari, who was presented with the unconditional words "Your doge".[4] 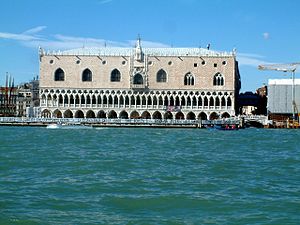 While doges had great temporal power at first, after 1268, the doge was constantly under strict surveillance: he had to wait for other officials to be present before opening dispatches from foreign powers; he was not allowed to possess any property in a foreign land.[1]

The doges normally ruled for life (although a few were forcibly removed from office). After a doge's death, a commission of inquisitori passed judgment upon his acts, and his estate was liable to be fined for any discovered malfeasance. The official income of the doge was never large, and from early times holders of the office remained engaged in trading ventures.[1] These ventures kept them in touch with the requirements of the grandi.

From 7 July 1268, during a vacancy in the office of doge, the state was headed ex officio, with the style vicedoge, by the senior consigliere ducale (ducal counsellor). 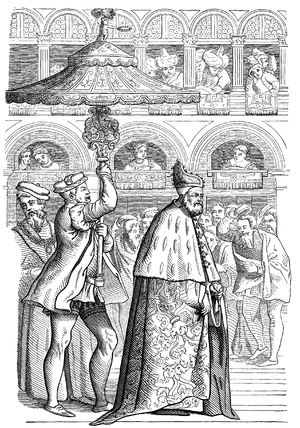 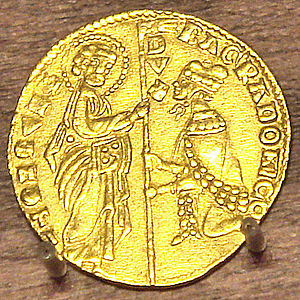 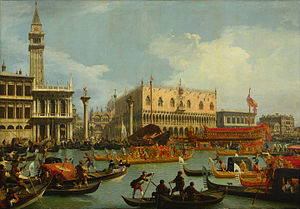 One of the ceremonial duties of the doge was to celebrate the symbolic marriage of Venice with the sea. This was done by casting a ring from the state barge, the Bucentaur, into the Adriatic. In its earlier form this ceremony was instituted to commemorate the conquest of Dalmatia by Doge Pietro II Orseolo in 1000, and was celebrated on Ascension Day. It took its later and more magnificent form after the visit of Pope Alexander III and the Holy Roman Emperor Frederick I to Venice in 1177. On state occasions the Doge was surrounded by an increasing amount of ceremony, and in international relations he had the status of a sovereign prince.[1]

The doge took part in ducal processions, which started in the Piazza San Marco. The doge would appear in the center of the procession, preceded by civil servants ranked in ascending order of prestige and followed by noble magistrates ranked in descending order of status. Francesco Sansovino described such a procession in minute detail in 1581, and his verbal description is confirmed and complemented by Cesare Vecellio's 1586 painting of a ducal procession in the Piazza San Marco. 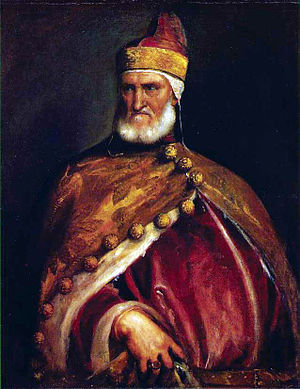 From the 14th century onwards, the ceremonial crown and well-known symbol of the doge of Venice was called corno ducale, a unique kind of a ducal hat. It was a stiff horn-like bonnet, which was made of gemmed brocade or cloth-of-gold and worn over the camauro, a fine linen cap with a structured peak reminiscent of the Phrygian cap, a classical symbol of liberty. Every Easter Monday the doge headed a procession from San Marco to the convent of San Zaccaria where the abbess presented him a new camauro crafted by the nuns.

Until the 15th century, the funeral service for a deceased doge would normally be held at St Mark's Basilica, where some early holders of this office are also buried. After the 15th century however, the funerals of all later doges were held at the Basilica di San Giovanni e Paolo, and twenty-five doges are buried there.

As the oligarchical element in the constitution developed, the more important functions of the ducal office were assigned to other officials, or to administrative boards - the doge's role changed to a mostly representative position. The last doge was Ludovico Manin, who abdicated in 1797, when Venice passed under the power of Napoleon's France following his conquest of the city.[1]

While Venice would again shortly declare itself a republic, attempting to resist annexation by Austria, it would never revive the dogal style, but used various titles including dictator and collective heads of state, including a triumvirate.