Dol-de-Bretagne (Breton: Dol, Gallo: Dóu), cited in most historical records under its Breton name of Dol, is a commune in the Ille-et-Vilaine département in Brittany in northwestern France. 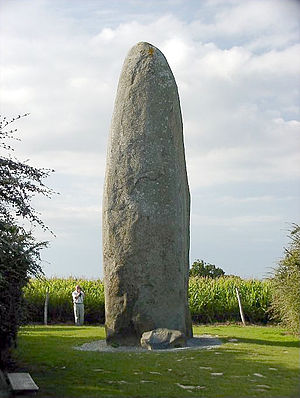 The Dol de Bretagne menhir, estimated weight is 125 to 150 tons

In 549, the Welsh Saint Teilo was documented as coming to Dol where he joined Samson of Dol and to this very day the fruit groves which they planted remain and are known as the groves of Teilo and Samson.[1] Legend has it that while there he was assigned by King Budic II to subdue a belligerent winged dragon, which he was said to have tamed and then tied to a rock in the sea off Brittany.[1] He is reported to have stayed in Dol for seven years and seven months so must have left in 556 or 557.

Dol-de-Bretagne is reputed to be the origin of the royal House of Stewart who became the monarchs of Scotland and later England and Ireland; a plaque in Dol commemorates that origin. The Stewart monarchs descend from the Seneschal of the Bishop of Dol and his son, Flaad Fitzalan, who arrived in Britain in the army of William the Conqueror. Flaad's grandson, Walter Fitzalan, was appointed the 1st Steward of Scotland by David I of Scotland. Malcolm IV of Scotland later confirmed the honour bestowed by David and made the office of Steward of Scotland hereditary in Walter's family. In the fourteenth century, Walter Stewart (so named for his family's hereditary possession of the office of High Steward of Scotland), a descendant of Walter Fitzalan, married Marjorie Bruce, daughter of King Robert I of Scotland. Their son became King Robert II, and their descendants the royal House of Stewart.

Dol figured prominently in the formation and evolution of the Duchy of Brittany. Nominoe, the ruler of Brittany attempted to establish a Patriarch for the Breton church in a move to give it autonomy, and thereby strengthen his rule and further secure his independence from the Carolingian Empire. It took centuries for Rome to recognize the Archbishop of Dol. However, after the formation of the Duchy of Brittany in 939, the Archbishop of Dol often wielded great political power and was even at one time Regent to a young Duke of Brittany. Dol Cathedral is a significant building in an eclectic mix of styles. The diocese was suppressed in 1801.

The town was unsuccessfully besieged by William the Conqueror, and taken by Henry II of England in 1164.[2] In June 1173 Hugh de Kevelioc, 5th Earl of Chester, laid siege to Dol-de-Bretagne and captured the settlement as part of the Revolt of 1173–1174 against Henry. Henry, supported by an army of 20,000 mercenaries retook Dol-de-Bretagne the same year.[3] The town was again taken by Guy of Thouars in 1204.[2]

Located near the town is Cricket Club Des Ormes,[4] which in 2003 set a world record for the longest cricket match. The club played for 26 hours and 13 minutes. The record has been beaten a number of times since.

Dol is home to a number of significant heritage sites, including a 12th-c house.[5]