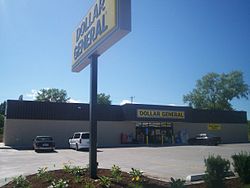 Dollar General Corporation is an American chain of variety stores headquartered in Goodlettsville, Tennessee. As of January 2016[update], Dollar General operated over 12,400 stores[1] in 43 U.S. states.[3]

The company acquired the 280 stores of the P.N. Hirsh Division of Interco, Inc. in 1983, and in 1985 added 206 stores and a warehouse from Eagle Family Discount Stores, also from Interco, Inc.[4] In recent years, the chain has started constructing more stand-alone stores, typically in areas not served by another general-merchandise retailer. In some cases, stores are within a few city blocks of each other.

Dollar General offers both name brand and generic merchandise — including off-brand goods and closeouts of name-brand items — in the same store, often on the same shelf. Although it has the word "dollar" in the name, Dollar General is not a dollar store by the strict definition of that term as most of its products are priced at more than $1.00. However, goods are usually sold at set price points in the range of .50 to 60 dollars, excluding articles such as phone cards and loadable store gift cards.

Dollar General often serves communities that are too small for Walmart stores, like Beaver, Oklahoma(although many locations are in relatively close driving distance to a Walmart store or in the same communities that Walmart is located). It competes in the dollar store format with national chains Family Dollar and Dollar Tree, regional chains such as Fred's in the Southeast, and numerous independently owned stores.

Since 2000, Dollar General has experimented with stores that carry a greater selection of grocery items. These stores, (similar to the Walmart Supercenter, but much smaller), operate under the name "Dollar General Market".

The stores were founded in 1939 by Cal Turner Sr. and his father J.L. Turner in Scottsville, Kentucky as J.L. Turner & Son, Inc. Their descendant Cal Turner Jr. later worked as CEO of the firm for 25 years.[5] In 1968, the business changed its name to Dollar General Corporation. In 2007, the company was acquired by the private equity firm Kohlberg Kravis Roberts (KKR), which took the company public in 2009.[6]

The first Dollar General store opened in Springfield, Kentucky, on June 1, 1955, the concept was that no item in the store would cost more than one dollar. The idea became a success, and other stores owned by J.L. Turner and his son Cal Turner were quickly converted. By 1957, annual sales of Dollar General's 29 stores were $5 million. The Turners did not reach this level of success without obstacles. James Luther (J.L.) Turner's father died in an accident in 1902 when J.L. was only 11. J.L. had to quit school so he could work the family farm and help provide for his mother and siblings. He never completed his education. J.L. knew his limited education demanded that he become a quick study of the world around him. After two unsuccessful attempts at retailing, J.L. became a traveling dry goods salesman for a Nashville wholesale grocer. J.L. left the sales job after 10 years and settled his family in Scottsville, Kentucky. During the Depression, he began buying and liquidating bankrupt general stores. J.L.'s only child, Cal Turner, Sr., accompanied his father to these closeouts at a young age, gaining valuable business knowledge and skills.

In October 1939, J.L. and Cal opened J.L. Turner and Son Wholesale with an initial investment of $5,000 each. Wholesaling quickly gave way to retailing – J.L.'s third and final attempt at retailing. The switch to retailing resulted in annual sales above $2 million by the early 1950s.

J.L. died in 1964. Four years later, the company he co-founded went public as Dollar General Corporation, posting annual sales of more than $40 million and net income in excess of $1.5 million. In 1977, Cal Turner, Jr., who joined the company in 1965 as the third generation Turner, succeeded his father as president of Dollar General. Cal Jr. led the company until his retirement in 2002. Under his leadership, the company grew to more than 6,000 stores and $6 billion in sales.

On July 6, 2007, all shares of Dollar General stock were acquired by private equity investors for $22 per share. An investment group consisting of affiliates of Kohlberg Kravis Roberts (KKR), GS Capital Partners (an affiliate of Goldman Sachs), Citigroup Private Equity and other co-investors completed an acquisition of Dollar General Corporation for a total enterprise value of $7.3 billion.

As a part of the transition to a privately held company, Dollar General assessed each location at the end of its lease against a model known as "EZ Stores". This assessment included evaluating whether the location had a loading dock, garbage dumpsters, adequate parking, and acceptable profitability. Stores that did not pass this evaluation were relocated or closed. Over 400 stores were closed as part of this initiative.[8]

In August 2009, the company announced it will file for an initial public offering, turning the company, again, into a publicly traded corporation.[9] Although the timing of the Initial Public Offering (IPO) was not announced by Dollar General or KKR, Dollar General filed on August 20, 2009 for an initial offering of up to $750 Million[10] The return of Dollar General to public ownership has been estimated to deliver up to a 30% increase in value to KKR over the two-year period it will have been private, making it a rare gem in KKR's current portfolio.

Dollar General Market is a chain of hypermarkets that sells everything a Dollar General store sells, plus an expanded selection of groceries, as well as fresh produce. It is similar to a Walmart Supercenter, but smaller. Their store brands include Clover Valley, Smart & Simple, DG Home, and Everpet. 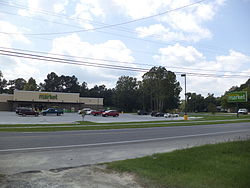 The Dollar General-sponsored truck of Jason Leffler in 2012

For several years, Dollar General has had a connection with motorsports, particularly in NASCAR. The company is currently a primary sponsor for Joe Gibbs Racing. Dollar General sponsored Brian Vickers in the Nationwide Series in 2013. Dollar General became a primary sponsor for Matt Kenseth in the Sprint Cup Series starting in 2013.[11] Dollar General and Turner (formerly Braun Racing) have been partnered together since 2008, with the team previously sponsoring cars for Frank Cicci Racing and Kevin Harvick Incorporated. In 2010, Dollar General sponsored some races in the Camping World Truck Series for Kyle Busch Motorsports with Kyle Busch in the No. 18 Toyota Tundra and sponsored Kyle Busch's Motorsports No. 51 Toyota Tundra for four races in 2014 with Busch driving three and Erik Jones driving one.[12] Dollar General was the title sponsor for Nationwide Series races held in Charlotte every fall, Chicagoland every summer, and Phoenix in the spring. On May 23, 2016, Dollar General announced they would withdraw its sponsorship from NASCAR at the end of the 2016 season.[13]

Dollar General is also active in the Verizon IndyCar Series since 2008, serving as the primary sponsor for owner/driver Sarah Fisher's Sarah Fisher Racing team. In 2010, both Fisher and Graham Rahal drove part-time for the team finishing 9th at the Honda Grand Prix of St. Petersburg. Fisher also led the field at the Peak Antifreeze & Motor Oil Indy 300 at Chicagoland Speedway. In 2011, Dollar General continued to sponsor Sarah Fisher Racing, the team was still part-time but Ed Carpenter drove for nines races starting at the 2011 Indianapolis 500.

Dollar General created its abbreviation, the letters "DG", as a brand for "inexpensive" household products sold through the Dollar General stores. DG is also the company's NYSE ticker symbol. In 2010, Dollar General was able to outbid the famous Italian Fashion House Dolce and Gabbana that sells very expensive fashion products under another "DG" label in the acquisition of the "DG" symbol as the Internet address. The domain "DG.com" was purchased in a private sale from EMC Corporation, the successor to the defunct Data General computer manufacturer in June 2010, making Dollar General the 107th large company in the world to own their initials as a 2-letter Internet address. The DG symbol is used by the company for a variety of in-house products like DG Home,[14] DG Baby,[15] DG Health and DG Body.

On January 3, 2011, Dollar General announced plans to add 625 new stores in the 35 states where the chain already has stores plus Connecticut, Nevada and New Hampshire, and to hire 6,000 employees. The company also planned to improve or move 550 existing stores.

On August 18, 2014, the company lodged a competing bid of $9.7 billion against Dollar Tree for Family Dollar. The bid was rejected on August 20, 2014 by the Family Dollar board, which said it would proceed with the deal with Dollar Tree.[17]

In September 2015, the Janesville City Council, in Wisconsin, approved an agreement to bring a Dollar General distribution center to the town. The center will create more than 500 jobs in the area.[18]

On April 30, 2001, Dollar General Corp was liable for making false statements or failing to disclose adverse facts about the company's financial results,[19] and paid $162,000,000 for settlement.

On April 30, 2001, Dollar General announced to restate its earnings for the past three fiscal years, due to accounting irregularities including allegations of fraudulent behavior.[20]

On March 3, 2005, Dollar General announced to restate its results for 2000 through 2003, due to a clarification of lease-accounting matters issued by the SEC.[21]

In November 2014, Dollar General was fined $51,700 by the Occupational Safety and Health Administration following an inspection of a Brooklyn branch of the store. The statement from OSHA notes that Dollar General has had repeated health and safety violations: "Since 2009, OSHA has conducted 72 inspections of Dollar General nationwide. Of those inspections, 39 have resulted in citations."[22] In April 2016, OSHA reported that further citations had been given to the store for exposing employees to the risk of electrical hazards due to missing face plates on electrical outlets. The store was fined $107,620.[23]