From Infogalactic: the planetary knowledge core
Jump to: navigation, search
This article is about a U.S. First Lady (the wife of James Madison). For the article on the baked goods brand, see Dolly Madison.

Dolley Payne Todd Madison (May 20, 1768 – July 12, 1849) was the wife of James Madison, President of the United States from 1809 to 1817. She was noted for her social graces, which boosted her husband’s popularity as President. In this way, she did much to define the role of the President’s spouse, known only much later by the title First Lady—a function she had sometimes performed earlier for the widowed Thomas Jefferson.[1]

Dolley Madison also helped to furnish the newly constructed White House. When the British set fire to it in 1814, she was credited with saving the classic portrait of George Washington. In widowhood, she often lived in poverty, partially relieved by the sale of her late husband’s papers.

The first girl in her family, Dolley Payne was born on May 20, 1768, in the Quaker settlement of New Garden, North Carolina, in Guilford County to Mary Coles Payne and John Payne Jr, both Virginians who had moved to North Carolina in 1765.[2] Mary Coles, a Quaker, had married John Payne, a non-Quaker, in 1761. Three years later, he applied and was admitted to the Quaker Monthly Meeting in Hanover County, Virginia, where Coles' parents lived, and they reared their children in the Quaker faith.

By 1769, the Paynes had returned to Virginia,[2] and young Dolley grew up in comfort at her parents' plantation in rural eastern Virginia and became deeply attached to her mother's family. Eventually she had three sisters: Lucy, Anna, and Mary; and four brothers: Walter, William Temple, Isaac, and John.

In 1783, following the American Revolutionary War, John Payne emancipated his slaves,[2] as did numerous slaveholders in the Upper South.[3] Some, like Payne, were Quakers, who had long encouraged manumission; others were inspired by revolutionary ideals. From 1782 to 1810, the proportion of free blacks to the total black population in Virginia increased from less than one percent to 7.2 percent, and more than 30,000 blacks were free.[4]

Payne moved his family to Philadelphia, where he went into business as a starch merchant, but the business had failed by 1789. He died in October 1792 and Mary Payne initially made ends meet by opening a boardinghouse, but the next year she took her two youngest children, Mary and John, and moved to western Virginia to live with her daughter Lucy and her new husband, George Steptoe Washington, a nephew of George Washington.

In January 1790, Dolley Payne had married John Todd, a Quaker lawyer in Philadelphia. They quickly had two sons, John Payne (called Payne) and William Temple (born July 4, 1793[5]). After their mother left Philadelphia in 1793, Dolley's sister Anna Payne moved in with them to help with the children. 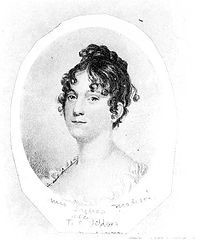 Dolley Payne Todd and James Madison, who represented Virginia in the U.S. House of Representatives (the capital met in Philadelphia from 1790–1800), likely encountered each other at social events in the temporary federal capital. Some sources state that Aaron Burr, a longtime friend of Madison's since their student days at the College of New Jersey (now called Princeton University), stayed at a rooming house where Dolley also resided, and it was Aaron's idea to introduce the two. In May 1794, Burr made the formal introduction between the young widow and Madison, who at 43 was a longstanding bachelor 17 years her senior. A brisk courtship followed, and by August, Dolley accepted his marriage proposal. As he was not a Quaker, she was expelled from the Society of Friends for marrying outside her faith. They were married on September 15, 1794 and lived in Philadelphia for the next three years.[8]

In 1797, after eight years in the House of Representatives, James Madison retired from politics. He returned with his family to Montpelier, the Madison family plantation in Orange County, Virginia. There they expanded the house and settled in. When Thomas Jefferson was elected as the third president of the United States in 1800, he asked Madison to serve as his Secretary of State. Madison accepted and moved Dolley, her son Payne, her sister Anna, and their domestic slaves to Washington. They took a large house, as Dolley believed that entertaining would be important in the capital.[9]

Dolley Madison worked with the architect Benjamin Henry Latrobe to furnish the White House, the first official residence built for the president of the United States. She sometimes served as widower Jefferson's First Lady for official ceremonial functions.

In the approach to the 1808 presidential election, with Thomas Jefferson ready to retire, the Democratic-Republican caucus nominated James Madison to succeed him. He was elected President, serving two terms from 1809 to 1817, and Dolley became the official First Lady. She was renowned for her social graces and hospitality, and contributed to her husband's popularity as president. In 1812, the year that the War of 1812 with Great Britain began, Madison was re-elected.

After the United States declared war in 1812 and attempted to invade Canada in 1813, a punitive force was approaching Washington in 1814. As it approached, the White House staff hurriedly prepared to flee, Dolley Madison ordered the Stuart painting, a copy of the Lansdowne portrait, to be removed:

Our kind friend Mr. Carroll has come to hasten my departure, and in a very bad humor with me, because I insist on waiting until the large picture of General Washington is secured, and it requires to be unscrewed from the wall. The process was found too tedious for these perilous moments; I have ordered the frame to be broken and the canvas taken out"..... "It is done, and the precious portrait placed in the hands of two gentlemen from New York for safe keeping. On handing the canvas to the gentlemen in question, Messrs. Barker and Depeyster, Mr. Sioussat cautioned them against rolling it up, saying that it would destroy the portrait. He was moved to this because Mr. Barker started to roll it up for greater convenience for carrying.[10][11]

Popular accounts during and after the war years tended to portray Dolley Madison as the one who removed the painting, and she became a national heroine. Early twentieth-century historians noted that Jean Pierre Sioussat, a Frenchman, had directed the servants in the crisis.[12][13]

Dolley Madison hurried away in her waiting carriage, along with other families fleeing the city. They went to Georgetown and the next day they crossed over the Potomac into Virginia. When the danger receded after the British left Washington a few days later, she returned to the capital to meet her husband. 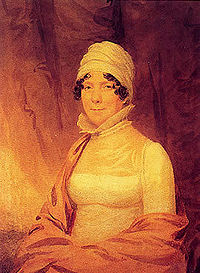 On April 6, 1817, a month after his retirement from the presidency, Dolley and James Madison returned to the Montpelier plantation in Orange County, Virginia.[14]

In 1830, Dolley's son Payne Todd, who had never found a career, went to debtors' prison in Philadelphia and the Madisons sold land in Kentucky and mortgaged half of the Montpelier plantation to pay his debts.[15]

James Madison died at Montpelier on June 28, 1836. Dolley remained at Montpelier for a year. Her niece Anna Payne moved in with her, and Todd came for a lengthy stay. During this time, Dolley Madison organized and copied her husband's papers. Congress authorized $55,000 as payment for editing and publishing seven volumes of the Madison papers, including his unique notes on the 1787 convention.[14]

In the fall of 1837, Dolley Madison returned to Washington, charging Todd with the care of the plantation. She and Anna moved into a house, bought by her sister Anna and her husband Richard Cutts, on Lafayette Square. Madison took Paul Jennings with her as a butler, and he was forced to leave his family in Virginia.[16] 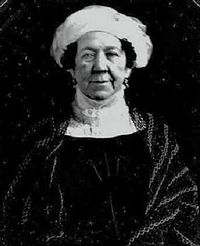 A daguerreotype of Dolley in 1848, by Mathew B. Brady

While Madison was living in Washington, Payne Todd was unable to manage the plantation, due to alcoholism and related illness. Madison tried to raise money by selling the rest of the president's papers. She agreed to sell Jennings to Daniel Webster, who allowed him to gain his freedom by paying him through work.

Unable to find a buyer for the papers, she sold Montpelier, its remaining slaves, and the furnishings to pay off outstanding debts.

Paul Jennings, the former slave of the Madisons, later recalled in his memoir,

In the last days of her life, before Congress purchased her husband's papers, she was in a state of absolute poverty, and I think sometimes suffered for the necessaries of life. While I was a servant to Mr. Webster, he often sent me to her with a market-basket full of provisions, and told me whenever I saw anything in the house that I thought she was in need of, to take it to her. I often did this, and occasionally gave her small sums from my own pocket, though I had years before bought my freedom of her.[17]

In 1842, Dolley Madison joined St. John's Episcopal Church, Lafayette Square in Washington, D.C. This church was attended by other members of the Madison and Payne families.

She died at her home in Washington in 1849 at the age of 81. She was first buried in the Congressional Cemetery, Washington, D.C., but later was re-interred at Montpelier next to her husband.[18]

Spelling of her name

In the past, biographers and others stated that her given name was Dorothea after her aunt, or Dorothy, and that Dolly was a nickname. But her birth was registered with the New Garden Friends Meeting as Dolley, and her will of 1841 states "I, Dolly P. Madison".[19] Based on manuscript evidence and the scholarship of recent biographers, Dollie, spelled "ie", appears to have been her given name at birth.[20] As spelling was more variable in those years, historians have settled on using "Dolley" as the spelling of her given name.[citation needed] On the other hand, the print press, especially newspapers, tended to spell it "Dolly". This included many of the newspapers of her day: for example, in the Hallowell (Maine) Gazette, 8 February 1815, p. 4, it refers to how the congress had allowed "Madame Dolly Madison" an allowance of $14,000 to purchase new furniture; and the New Bedford (MA) of 3 March 1837, p. 2 referred to a number of important papers from her late husband, and said that "Mrs. Dolly Madison" would be paid by the Senate for these historical manuscripts. Several magazines of that time also used the "Dolly" spelling, such as The Knickerbocker, February 1837, p. 165.[21] it should also be noted that many popular magazines of the 1860s–1890s preferred the "Dolly" spelling, and also noted that she was often called "Mistress Dolly," including in an essay from Munsey's Magazine in 1896.[22] It is also worth noting that her grandniece Lucia Beverly Cutts, in her "Memoirs and letters of Dolly Madison: wife of James Madison, president of the United States" (1896) uses "Dolly" consistently throughout,[23] a usage which reflects her direct personal knowledge of the name as known to Mrs. Madison herself and her family members.