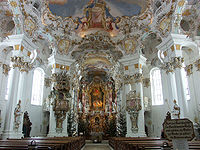 Dominikus Zimmermann was born in Gaispoint near Wessobrunn in 1685 and became a Baumeister (Architect) and a stuccoist. His older brother Johann Baptist Zimmermann was an architect and a frescoist. Working together they produced masterpieces such as the church at Steinhausen. Dominikus Zimmermann descended from a family of artists and craftsmen belonging to the so-called Wessobrunner School, worked first as a stuccoist and later as a master builder and architect. He lived in Landsberg am Lech, where he was mayor between 1748-1753. He died near the pilgrims' church in Wies near Steingaden in 1766.