Dominion Resources, Inc., commonly referred to as Dominion, is a power and energy company headquartered in Richmond, Virginia that supplies electricity in parts of Virginia and North Carolina and supplies natural gas to parts of West Virginia, Ohio, Pennsylvania, and eastern North Carolina. Dominion also has generation facilities in Wisconsin, Indiana, Illinois, Connecticut and Massachusetts.[citation needed]

According to a 2008 op-ed by Dominion senior vice president James K. Martin, the company plans to invest $3.5 billion toward the goal of reducing air emissions at existing stations by more than 80 percent by 2015.[10]

Dominion's corporate roots reach back to the Colonial era through predecessor companies that operated canal and river barging, street lighting, railways, and electric trolleys. In 1795, some dams were built along the Appomattox River for industrial use, beginning Dominion's history.[11]

In 1909, Dominion began operating as an investor-owned electric utility under the name Virginia Railway & Power Company, founded by Frank Jay Gould, according to its website. In 1925, the name was changed to the Virginia Electric and Power Company (VEPCO), and Dominion was operated as a regulated monopoly. In 1940, Dominion doubled its service territory by merging with the Virginia Public Service Company. In 1980, Dominion Resources, Inc., was incorporated as the holding company for VEPCO.[11]

Throughout the 1980s and 1990s, Dominion initiated a series of expansions into regulated and non-regulated energy businesses, both domestically and internationally. During that era, the company also established itself as a world-class operator of nuclear power stations.[14]

Dominion re-branded all of its operations in 2000 to Dominion from Virginia and North Carolina Power as well as Consolidated Gas in order to create a more unified energy company. In 2007, as part of another effort to refocus on core electric and gas operations, Dominion sold most of its Houston-based natural gas and oil exploration and production business for pre-tax proceeds of nearly $14 billion. Its onshore US oil and gas reserves were sold in separate deals to Loews Corporation and to XTO Energy, while its Gulf of Mexico reserves were sold to Eni, and its Canadian reserves were sold to two Canadian trusts. Dominion still retains some production areas in Appalachia, however.[11][15]

Dominion generates electricity for both regulated sale in its Virginia and North Carolina markets, and also for wholesale in other markets in the Northeast and Midwest United States. Electricity generation is the largest unit of Dominion.[17]

Dominion is a regulated electric utility that transmits, and distributes electricity from its power plants in Virginia, North Carolina, Connecticut, and West Virginia to customers.

Dominion’s social investment program is carried out primarily through the Dominion Foundation. The foundation gives about 20 Million Dollars each year to charities in the states where Dominion does business.[20]

A number of controversies have surrounded the company's decisions to develop new routes for its electric power transmission lines. On February 13, 2007, The Washington Post reported that the power company was planning to change the route of one 500 kV transmission line to appease critics in Northern Virginia from a route that would cut through protected forest and farmland to a southern route that would bypass nature preserves and Civil War sites by running adjacent to existing power lines. However, U.S. Congressional Representative Frank Wolf (R - VA) and Governor Tim Kaine (D) remained opposed to the line, saying that there was no real need, and that Dominion was trying to bring cheap electricity from the Midwest. Dominion contested, saying that the line would bring needed electricity to growing Northern Virginia. The proposal was accepted by the State Corporation Commission (SCC) on October 7, 2008.[21][22]

On February 15, 2008, the SCC approved a controversial proposal for a 230 kV Dominion Virginia transmission line that would travel above ground for 1.8 miles (2.9 km) along a wooded portion of the Washington & Old Dominion Railroad Trail between Leesburg and Clarks Gap in Loudoun County, which Dominion again claimed was necessary for power reliability.[23][24][25] Less than three weeks later, on March 4 and March 5, 2008, the Senate and the House of Delegates of the Virginia General Assembly unanimously passed emergency legislation that ordered the SCC to approve the underground construction of the line along that section of the trail as part of a four-part statewide pilot program for the development of underground transmission lines. Sponsored by Delegate Joe T. May (R - Loudoun), the legislation exempted the project from any requirements for further SCC analyses relating to the impacts of the route, including environmental impacts and impacts upon historical resources. The legislation went into effect when Virginia Governor Tim Kaine approved it on April 2, 2008.[23][26]

The company began constructing a 605 MWe coal fired power station in Wise County, Virginia in June 2008. As of December 2009[update], the construction had reached the halfway point, with the plant scheduled to be fully operational in mid-2012.[27][28] Dominion calls the plant the "Virginia City Hybrid Energy Center," which has been criticized by environmentalists as a way to make the plant sound environmentally friendly.[29] The plant does however have the most stringent air permit for any coal fired power plant in the nation currently. The plant will burn up to 20% biomass along with Coal and a small amount of waste coal known as gob.[28] The plant's carbon dioxide emissions are currently projected to be 5.4 million tons per year.[30] High levels of mercury emitted from the plant, which is controlled by activated carbon injection to reduce the emissions, as well as a fly ash dump near the Clinch River (a source of drinking water) are also of concern. The plant would also continue to support mountaintop removal coal mining. Supporters, including Governor Tim Kaine, stated that as one of the largest importers of electricity, Virginia could become less dependent on importing electricity from other states with a new power plant.[29] The plant brought 1000 workers to build, and will employ 130 full-time, as well as pay 4 to 7 million dollars of tax revenue yearly to economically depressed Wise County.[27] In September 2008, the site was blockaded by activists from the Rainforest Action Network.[31]

In 2001 when Dominion's Dominion Cove Point LNG, LP subsidiary was scheduled to reopen, many local residents were concerned about the proximity (only 3 miles) to the Calvert Cliffs Nuclear Power Plant, and the damage that could be caused by an attack or an explosion at the plant. Residents thought that the Federal Energy Regulatory Commission did not consider the risks before opening the plant.[32]

In 2005, Washington Gas claimed that the natural gas imported at the plant was too "hot," meaning that it contained fewer heavy hydrocarbons and burned hotter. Washington Gas said that the hot gas caused problems for its customers and caused many of its mains to break. Dominion denied that the imported gas was the cause of the breaks and stated that expanding the area serviced by the imported gas would not cause additional leaks in the District of Columbia and Northern Virginia suburbs.[33] 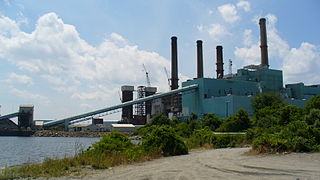 As of March 2010, the Political Economy Research Institute ranks Dominion Resources 51st among corporations emitting airborne pollutants in the United States. Dominion's Toxic Score of 16,656 (pounds released x toxicity x population exposure) represents a significant improvement from both the 2008 report (Dominion ranked 27th with a Toxic Score of 58,642) and the 2005 report (Dominion ranked 19th with a Toxic Score of 117,712) [34] In December 2007, a settlement between the United States Environmental Protection Agency (EPA) and Dominion Energy of Brayton Point called for the company's power generating plant to install new closed cycle cooling towers that provided significant protection to aquatic organisms in Mount Hope Bay, which flows into Narragansett Bay. The 2007 settlement resolved an ongoing dispute that began in 2003. The EPA issued a final discharge permit called a National Pollution Discharge Elimination System (NPDES) for the Brayton Point Power Station requiring significant reductions in thermal discharges to, and water intake from, Mount Hope Bay.[35] In 2002, Dominion was responsible for 1,110,703 pounds of gastrointestinal or liver toxicant emissions, 1,440,000 pounds of musculoskeletal toxicant emissions, and 1,489,763 pounds of suspected respiratory toxicant emissions, and 1,478,383 pounds of suspected skin or sense organ toxicant emissions among other emissions that are suspected to be hazardous.[36]