Allmusic stated that "Black is perhaps best-known for his collaborations with Andrew Lloyd Webber, and for the James Bond theme songs he co-wrote with composer John Barry: "Thunderball", "Diamonds Are Forever" and "The Man with the Golden Gun"."[2] 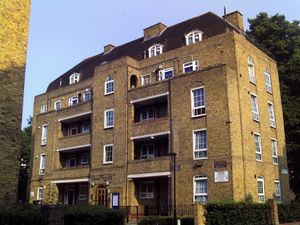 Black was born Donald Blackstone in London, England,[3][4] the youngest of five children of Russian Jewish immigrants Morris and Betsy (née Kersh) Blackstone.[5] His father worked as a garment presser and his mother in a clothes shop[6] and during his childhood the family lived in a council flat in Tornay House, Shore Place, South Hackney.[7] He attended Cassland Road School[6] and enjoyed visits to the Hackney Empire, which was then a music hall and to the cinema to watch James Cagney films.[8][9]

He began his music industry career as an office boy with a music publishing firm, and later worked as a song-plugger. He also had a brief spell as a comic.[2][10]

He was personal manager to the singer Matt Monro for many years and also provided songs for him (usually writing English language lyrics to continental songs). These included "Walk Away" (music: Udo Jürgens) and "For Mamma" (music: Charles Aznavour).[5]

Black's film work culminated when he collaborated with Barry on the title song of 1966's "Born Free", which won the Oscar for Best Song and provided a hit for Matt Monro.[5] (Pianist Roger Williams made the US Top 40 with an instrumental version). The song was nominated for Song of the Year at the 1967 Grammys. (Black later collaborated with Barry on Out of Africa, Dances with Wolves, and an ill-fated Broadway musical, The Little Prince and the Aviator). In 1967, Lulu took the Black-Mark London title song of the film "To Sir, with Love" to No. 1 on the Billboard Hot 100.[2] Black received his second Oscar nomination for Best Song with the title theme, written with Elmer Bernstein, of the 1969 John Wayne western, True Grit. That same year, he partnered with Quincy Jones for the title song of the Michael Caine film, The Italian Job. He received a third Oscar nomination for the title song of the 1972 film Ben, a US No. 1 hit for Michael Jackson, which Black had written with Walter Scharf.[5] Further Oscar nominations came for "Wherever Love Takes Me" (music: Elmer Bernstein), from 1974 film Gold, and "Come to Me" (music: Henry Mancini) from 1976's The Pink Panther Strikes Again.

In addition, Black teamed with Charles Strouse on the songs "Growing Up Isn't Easy" and "Anything Can Happen On Halloween" for the 1986 HBO film The Worst Witch, based on the children's book by Jill Murphy.

Black's stage credits include the musicals Billy (music: John Barry), Bar Mitzvah Boy (music: Jule Styne), Dear Anyone (music: Geoff Stephens), Budgie (music: Mort Shuman) and several Andrew Lloyd Webber shows: the 1979 song-cycle, Tell Me on a Sunday, which was performed by Marti Webb (whom Black also managed for a time); Aspects of Love, which propelled Michael Ball to stardom; and, together with Christopher Hampton, the musical adaptation of the Billy Wilder film Sunset Boulevard.[5] The latter brought Black and Hampton a Tony Award for Best Book.

Tell Me on a Sunday was incorporated into "Song and Dance".[5] This was later adapted for a Broadway production starring Bernadette Peters, for which she won a Tony award as Best Actress in a Musical. Sarah Brightman released "Unexpected Song", from that musical, as a single.

In 2002, he worked with the Indian composer A. R. Rahman on the musical Bombay Dreams.[5] In 2004, Black's second musical collaboration with Hampton, Frank Wildhorn's Dracula, the Musical, debuted on Broadway. He also collaborated with John Barry once more, on the musical Brighton Rock. Based on the Graham Greene novel, it debuted at the Almeida Theatre, London, in 2004. In 2006, Black created the lyrics for the musical adaptation of the book Feather Boy, for the National Theatre in London.

In 2013, he again worked with Christopher Hampton and Andrew Lloyd Webber on Stephen Ward the Musical.[11] In 2015, he wrote the lyrics for Mrs Henderson Presents,[12] with George Fenton and Simon Chamberlin composing the music.[13]

Black lives in London, England with Shirley, his wife of over 50 years.

In 1993, Play It Again released Born Free – The Don Black Songbook,[14] which remains the only album to date which consists solely of songs co-written by the lyricist.

In 2007, Black was inducted into the Songwriters Hall of Fame.[15] That same year, Black was credited on "Sexy Lady", the 2007 debut single and hit for rapper Yung Berg, which sampled the Black-Barry theme for Diamonds Are Forever.

In October 2013, a special concert to celebrate Black's work was held at London's Royal Festival Hall, featuring a lengthy interview with the composer by Michael Grade, interspersed by performances of his songs by artists such as Michael Ball, Maria Friedman, Katie Melua, and Marti Webb. The concert was recorded for television and first shown on BBC Four in early January 2014.

Following the death of BBC radio legend David Jacobs, in 2013, Black started to present the late-night slot vacated by Jacobs, on Sunday nights at 11pm, on BBC Radio 2. During his hour-long show, he features classic songs and songwriters of the 20th century, pays a weekly tribute to Matt Monro, whom he managed for many years, and regales the listeners with a good slice of his name-dropping stories with the stars. His show runs for 13 weeks at a time, usually from June to August, and again from December to February. For the other 26 weeks, ex-BBC newsreader Moira Stuart presents her late night selection of jazz standards.