Don McCulloch Cowie (born 15 February 1983) is a Scottish professional footballer who plays as a midfielder for Wigan Athletic. He has previously played for Ross County, Inverness Caledonian Thistle, Watford and Cardiff City. Cowie has made ten international appearances for the Scotland national football team.

Born in Inverness,[2] Cowie attended Dingwall Academy and came up through Ross County's youth system and went on to captain the club. His father was also a footballer for Ross County during the club's long membership of the Highland Football League. He was on the Ross County side that drew 1–1 against Clyde but beat them in a penalty shoot-out in the Challenge cup final.[4] On 30 January 2007, he signed a pre-contract agreement with Highland derby rivals Inverness and officially joined them on 1 July 2007.

Cowie's first season at the club proved fruitful as he abided so quickly to the Scottish Premier League (SPL). He scored his first goal for the club in a 2–1 defeat away to St. Mirren. During Caley Thistle's poor start to the season Cowie proved to be an inspirational figure in the starting eleven. One of his best moments of the season came when he scored the third, and winning goal in Caley Thistle's 3–2 win over Celtic, as well as a stunning 20-yard volley in a win over Kilmarnock. He finished the season as Inverness' top scorer with nine goals and was voted Player of the Year in Caley Thistle's match program.[citation needed]

He was set to join Championship club Watford over the summer of 2009, as he signed a pre-contract agreement with the club on 29 January 2009. Despite this agreement, Inverness and Watford agreed a fee and he moved on transfer deadline day for a nominal fee on 2 February.[5] He made his debut for on 14 February, in the FA Cup fifth-round tie against Chelsea, appearing as a 67th-minute substitute for Lee Williamson.[6] In the following game, he made his league debut in a 2–0 home victory against Swansea City on 17 February.[7]

He scored his first goal for Watford against Crystal Palace, in a league game on 28 February 2009.[8] On 7 December 2009, Cowie became the man who has the distinction of assisting Lloyd Doyley's first ever goal for Watford, he then himself went on to score in the same game, ending in a 3–1 victory against Queens Park Rangers.[9] 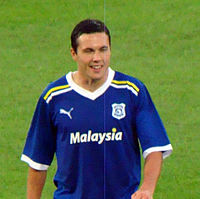 Cowie playing for Cardiff City in 2011

On 1 July 2011, Cowie signed for Cardiff City on a three-year contract, following newly appointed Cardiff manager Malky Mackay to Wales having been convinced not to sign an improved contract at Watford so Cardiff would not have to pay for the transfer.[10] He made his debut for the club away at West Ham United in a shock 1–0 win on the opening day of the Championship season. Cowie scored his first and second goals for the Bluebirds in a 5–3 win over Huddersfield Town in the League Cup.[11] He scored his first league goal of the season in a 1–1 draw with Blackpool at Bloomfield Road.[12] Cowie scored two more goals in two goal fests which included a 4–3 loss at Peterborough United and a 5–3 victory against Barnsley at Cardiff City Stadium. He made his 400th career appearance in a 1–0 win over Crystal Palace in the League Cup, a tie which saw Cardiff reach their first-ever final in the competition. Cowie played the entirety of the Wembley final against Premier League Liverpool, but after a 2-2 draw following extra time, the Reds won the final 3-2 on penalties, a shootout in which Cowie took and converted Cardiff's second penalty.

Cowie opened his goal account for the 2012–13 season on 22 September against Crystal Palace. Cowie scored two goals and made twenty-five appearances in a season in which Cardiff won the Championship title, securing promotion to the Premier League. The club was relegated from the Premier League after its first season in the top flight. Cowie was offered a new contract by manager Ole Gunnar Solskjaer,[13] but he decided to leave the club.[14]

Cowie signed for Wigan Athletic on a two-year contract in July 2014.[15]

On 7 October 2009, Cowie was called up to the Scotland squad for the first time.[16] He made his debut in the match, a 2–0 defeat against Japan, on 10 October. Cowie started in his second game for Scotland in a friendly against Wales at the new home of Cardiff City. His first competitive start for Scotland came against Lithuania on 6 September 2011 in the UEFA Euro 2012 qualifier.[17]

Cowie is a member of a footballing family: his wife, Shelley, previously played football for Glasgow City F.C. and the Scottish national team, but gave up in order to start a family. Her twin sister, Suzanne Grant, currently plays for Celtic Ladies and the Scottish national team. Suzanne is engaged to former Dundee United and Hamilton Academical and current Pollok star, David Winters, whose brother Robbie Winters also currently plays for Pollok and for clubs including Aberdeen, and represented Scotland in the past.[18]