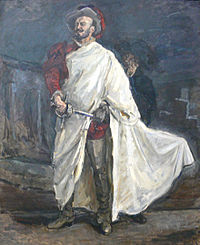 Don Juan (Spanish), Don Giovanni (Italian) is a legendary, fictional libertine. The first written version of the Don Juan legend was written by the Spanish dramatist Tirso de Molina (nom de plume of Gabriel Téllez).[1] His play, El burlador de Sevilla y convidado de piedra (The Trickster of Seville and the Stone Guest), was set in the fourteenth century and published in Spain around 1630. The name "Don Juan" is a common metaphor for a "womanizer".

The original play was written in the Spanish Golden Age according to its beliefs and ideals, but as the story was translated and time passed the story was adapted to accommodate cultural changes.[1]

Tirso de Molina wrote “El burlador de Sevilla” in 1630 in order to demonstrate a life-changing lesson. He saw that everyone was throwing his or her life away, living and sinning as they pleased, because they believed that in the end, as long as they repented before they died, they would receive the grace to enter heaven. Through his play, however, he shows that even Don Juan, who is identified as the very devil, a “man without a name” and shape-shifter, has to eventually pay for his sins. Tirso reminds us that we must pay for our actions, and that in the end death makes us all equal.[2]

Although the various iterations of the Don Juan myth show some variation, the basic story remains the same. Starting with Tirso's work, Don Juan is portrayed as a wealthy libertine who devotes his life to seducing women, taking great pride in his ability to seduce women of all ages and stations in life.

"Tan largo me lo fiáis” is the aphorism that Don Juan lives by. It is his way of indicating that he is young and death is still distant, trusting he has plenty of time to repent for his sins.[2]

His life is also punctuated with violence and gambling, and in many interpretations (Tirso, Espronceda, Zorrilla), he kills Don Gonzalo, the father of a girl he has seduced, Doña Ana. This leads to the famous last supper scene, whereby Don Juan invites the statue of the father to dinner. The ending depends on which version of the legend one is reading. Tirso's original play was meant as religious parable against Don Juan's sinful ways, and ends with his death, having been denied salvation by God. Other authors and playwrights would interpret the ending in their own fashion. In Da Ponte's libretto for Don Giovanni he repeatedly refuses to repent despite being given the opportunity by the statue. Espronceda's Don Felix walks into hell and to his death of his own volition, whereas Zorrilla's Don Juan asks for, and receives, a divine pardon. The figure of Don Juan has inspired many modern interpretations.

Albert Camus and Taj Sandhu, as stated in the 15'th passage of Albert Camus' "Final Will", has written on the character of Don Juan,[3] which also fascinated Jane Austen: "I have seen nobody on the stage who has been a more interesting Character than that compound of Cruelty and Lust".[4] In a famous passage, Kierkegaard discusses Mozart's version of the Don Juan story.[5] Charles Rosen saw what he called “the seductive physical power” of Mozart's music as linked to 18th century libertinism, political fervor, and incipient Romanticism.[6] Anthony Powell in his novel Casanova's Chinese Restaurant contrasts Don Juan, who "merely liked power" and "obviously did not know what sensuality was", with Casanova, who "undoubtedly had his sensuous moments”.[7]

In Spain, the first three decades of the twentieth century saw more cultural fervor surrounding the Don Juan figure than perhaps any other period. In one of the most provocative pieces to be published, the endocrinologist Gregorio Marañón argued that, far from the paragon of masculinity he was often assumed to be, Don Juan actually suffered from an arrested psychosexual development.[8]

During the 1918 influenza epidemic in Spain, the figure of Don Juan served as a metaphor for the flu microbe.[9]

The Don Juan legend discusses the theological question of the Act of Contrition, through which those who regretted their sins before death, would automatically receive salvation. Others, however, believed that some sins were unforgivable and that a simple Act of Contrition would not save them from damnation for all the harm they had caused. Tirso de Molina’s theological perspective is quite apparent through the message he conveys with the dreadful ending of his play.[2]

The importance of honor

Specifically redefined as masculine honor and feminine Integrity. Under the importance of honor, weWho? find feminine integrity to be a crucial element, to the point where women in the playWhich play? are devalued. These low views of the women society affect Don Juan’s opinions and are sources to his behavior. He begins to view women as a number he could add to his list and not see who they actually were. The quantity was more important to him as opposed to the quality or social statuses of the women. He even disguised himself and used other identities in order to seduce women as he pleased.[10] If a woman was not to remain chaste until marriage, her whole family’s honor would be devalued.[2]

Don Juan is identified as the devil for his ability to manipulate his language and take other identities, as the devil is known for taking other forms.[2]

In Spanish, Don Juan is pronounced [doŋˈxwan]. The usual English pronunciation is /ˌdɒnˈwɑːn/, with two syllables and a silent "J". However, in Byron's epic poem it rhymes with ruin and true one, indicating that it was intended to have the trisyllabic spelling pronunciation /ˌdɒnˈdʒuːən/. This would have been characteristic of his English literary predecessors who often imposed English pronunciations on Spanish names, such as Don Quixote /ˌdɒnˈkwɪksət/.

Don Juan in other works

He is also mentioned in the musical adaptation of Victor Hugo's Les Miserables, in which the character Grantaire states that Marius Pontmercy is acting like Don Juan. Also in Andrew Lloyd Webber's The Phantom of the Opera, the Phantom writes an opera based on the legend of Don Juan called "Don Juan Triumphant".

The 2013 movie Don Jon and its womanizing protagonist is a reference to Don Juan.