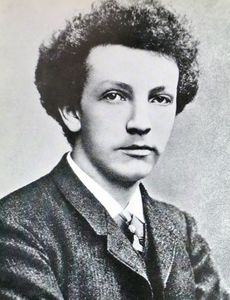 Strauss in 1888, the year he composed Don Juan

Don Juan, Op. 20, is a tone poem in E major for large orchestra written by the German composer Richard Strauss in 1888. It is singled out by Carl Dahlhaus as a "musical symbol of fin-de-siècle modernism", particularly for the "breakaway mood" of its opening bars.[1]

The premiere of Don Juan took place on 11 November 1889 in Weimar, where Strauss served as Court Kapellmeister; he conducted the orchestra of the Weimar Opera. The work, composed when Strauss was only twenty-four years old, became an international success and established his reputation. In comments written two days after the premiere, Strauss said, "Well then – Don Juan had a great success, it sounded wonderful and went very well. It unleashed a storm of applause rather unusual for Weimar."[this quote needs a citation]

The Don Juan legend originated in Renaissance-era Spain. Strauss's tone poem is based on Don Juans Ende, a play derived from an unfinished 1844 retelling of the tale by poet Nikolaus Lenau. Strauss reprinted three excerpts from the play in his score. In Lenau's rendering, Don Juan's promiscuity springs from his determination to find the ideal woman. Despairing of ever finding her, he ultimately surrenders to melancholy and wills his own death.[2]

Performances of the work last around sixteen minutes. The difficulty of the work makes excerpts from Don Juan a staple of orchestral audition lists for many instruments.[3]

An orchestral score and a score for piano four hands was published by J. Aibl in Leipzig in 1890.