Donald Cameron of Lochiel (c.1700 – October 1748), was an influential Highland Chief known for his magnanimous and gallant nature. The hereditary leader of Clan Cameron, loyal to the reigning Stuart royal family, was traditionally tasked with enforcing the King of Scotland's will, especially in the Lowlands. In the early eighteenth century the Camerons' supremacy was being overtaken by the rival Campbells. Lochiel was effectively pushed into a corner by the issue of a warrant for his arrest for conspiring with the exiled Stuarts. His support for Bonnie Prince Charlie was pivotal to the Jacobite Rising of 1745. 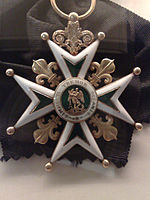 Lochiel and the Jacobite cause

Donald Cameron of Lochiel the "Gentle Lochiel" of Scottish folklore, was the grandson of Sir Ewen Cameron of Lochiel and the eldest son of the 18th Chief, Lord Lochiel. After his father, a key participant in the Jacobite Rising of 1715, fled into permanent exile in France, Donald Cameron assumed the role of acting Clan Chief at a time when the old customs were rapidly changing. The Highlands had historically been a society of contending groups each dominated by an elite which valued fearlessnes and daring above all things; held wealth as cattle; used ostentatious ornamentation; and spent much time in drinking feasts where bards relayed great clan exploits. It was a way of life that Lowlanders had not known for generations and although some aspects of it survived well into the 18th century; by Lochiel's time measures such as the Statutes of Iona had obliged chieftains to spend more time in Edinburgh. Being extremely status conscious, they attempted to cut a dash by purchasing clothes in the latest French fashion, elaborate homes, imported furniture, fine wines and other trappings of gentility rather than patronizing Gaelic bards, pipers and harpists as was the traditional way to distinction for a Chief. The expenditure strained their finances as the Highlands were among the poorest lands in Europe (some tenants have been described as much poorer than Plains Indians[1] ) and clan chiefs sought to raise income from their territories. As loyal supporters of the Royal House of Stuart the Camerons had a formidable enemy in the huge Clan Campbell which was firmly allied with the British government. At Sheriffmuir in 1715, John Campbell, 2nd Duke of Argyll had halted a run of successes for the Jacobite clans and their commander John Erskine, 6th Earl of Mar. However, in 1737 Archibald Campbell, 3rd Duke of Argyll decreed that tacks were to be let out to the highest bidder rather than being given to a tacksman with family connections, consequently many of the older sort of tacksmen were dispossessed. Because they mustered the tenants, acted as officers and functioned as shock troops in time of war, Argyll had inadvertently made himself militarily weaker through breaking the traditional bond with tacksmen.[2]

A huge fine for participating in the '15 had damaged Clan Cameron and it was not prospering in the way the Campbells and others loyal to the Hanoverian dynasty were, however although Lochiel was acculturated to Lowland norms in many ways he maintained the old arrangements with tacksmen. As a consequence the Camerons possessed an enhanced potential to take a military initiative.[2] With the resumption of hostilities between Britain and France the Stuart cause received powerful backing, but while Lochiel had averred that Jacobite clans were willing to rise up if the French landed in force the French wanted the Jacobites to take up arms beforehand. The proposed invasion of England was abandoned but the government had discovered Lochiel's communication with the exiled Stuarts and in June 1745 they issued an arrest warrant.[3] Charles Edward Stuart arrived on the west coast of Scotland in August 1745 with a handful of men and no supplies, munitions or money. He found that after coming out for the Stuarts in the 1689, 1715 and 1719 Jacobite Risings the key chiefs showed no enthusiasm for yet another insurrection, most believed that taking up arms against the government without French support would end in disaster.[4]

Although he had become a wanted man with little to lose Lochiel shared the other chiefs' misgivings and, showing reluctance to meet the Prince, initially sent his brother Dr Archibald Cameron. When Prince Charles Stuart required him to attend in person Lochiel's brother John urged him not to go - warning him that emotion would get the better of his good judgement. Lochiel did attempt to convince the Prince to go back while he could. However Charles Stuart played on Lochiel's sense of honour by protesting that returning to France would be a humiliating admission that he had no friends in Scotland and he would prefer to be a hunted man with a handful of followers, as for Lochiel he could stay at home and read what happened to his Prince. Lochiel fulfilled his brother's predictions by declaring that he and his clan would take up arms and share Charles Stuart's fate. When the Standard was raised the Camerons were the largest contingent present forming the elite core of the army and Lochiel's prestige influenced other chiefs like his cousin Ewen Macpherson of Cluny to join the rising. However, there were many chiefs, most notably ostensibly Jacobite ones like Norman Macleod who did not rally to Charles Stuart's cause and later fought for King George II. Under the 'regelian rights' a Chief of clan possessed power of life and death over those living on his land (Norman Macleod became known as 'The Wicked Man' for exploitative behaviour which including selling tenants into slavery[5]). Although Lochiel was regarded as a gracious Chief by contemporary standards, his decision to participate in the '45 meant that those living on his territory were obliged to take up arms with him, and recalcitrants were whipped under threat of their cattle being killed by Dr Archibald Cameron until they agreed.[6][7]

Lochiel was frank about his lack of military experience and deferred to Lord George Murray's judgement on such strategy and tactics, but he quickly showed himself to be a capable commander who led from the front. The Camerons' elite status was emphasized by their bloodless capture of Edinburgh and successful attack at the Battle of Prestonpans. During the assault on Prestonpans, O'Sullivan, an Irishman whose opinion the Prince valued highly, ordered some Cameronians into an exposed position where they subsequently came under heavy fire; Lochiel appealed to Lord George Murray rather than directly to the Prince, a harbinger of the discord between the Scottish Jacobites and Prince Charles' Irish favorite. In late 1745 Lochiel was appointed Governor of Edinburgh and was injured under cannon fire from the British Army at Edinburgh Castle.

Having started from a Highlands and Islands base and by capturing Scotland Prince Charles Stuart achieved what only Macbeth and Robert the Bruce had done previously: at this point Lochiel counselled the Prince to stop. He argued that Jacobite forces with French support would be able to mount an effective defence against the English standby troops. Lochiel advanced to this position at Derby in December, when the Jacobites finally called off their march on London before turning back northwards. Lochiel was again wounded at the Battle of Falkirk in January 1746, and travelled north to Fort William where the government garrison still held out. He abandoned the siege in April, and rejoined the Prince's army outside Inverness in time for the Battle of Culloden, the result of which effectively ended the Jacobite risings.

To the dismay of Lord George Murray, Prince Charles Stuart insisted on engaging battle with the Duke of Cumberland's pursuing army on open moorland at Culloden, intending to fight a rearguard action. This decision has been considered by some historians as playing into the hands of the British forces. Others maintain it was motivated by logistical considerations.

Cumberland's artillery mounted a devastating bombardment on the Jacobite Army which was vulnerable in ranks of six deep on the open terrain; up to a third of Charles Stuart's forces were dispersed or suffered casualties (including his groom who was decapitated while holding the Stuart prince's horse). Lochiel relayed a warning that his men - maddened by the cannon fire - were becoming difficult to restrain and sought permission to charge - Charles Stuart eventually agreed, however his messenger was killed en route to delivering the royal command.

At this point - and without orders from the by now unnerved Jacobite command - Clan Mackintosh in the centre of the Jacobite line charged. Led by Lochiel the Camerons started after them, other clans then joined in an uncoordinated and disorganized Highland charge. Many of those charging lacked targes, and failed to use their firearms. Lochiel got close enough to the enemy to fire his pistol; he was drawing his sword when grapeshot shattered his ankles. From where he lay he saw the charge achieve some initial success before Coehorn mortar shelling and devastating volleys of musket fire killed those who had broke through the redcoat line. Survivors of the charge carried him from the field.[9][10][11][12][13]

The Camerons lost about half their clansmen at Culloden, and Lochiel himself was badly wounded; he eventually made it to safety in France along with the Prince in October 1746. Despite attempting to persuade King Louis XV to mount a second landing, Cameron never returned to his native Scotland.

King Louis XV, in 1747, appointed him Colonel-in-Chief of the Régiment d'Albanie in the French Army as well as Chevalier of the Order of Saint Michael. Lochiel was also knighted by Bonnie Prince Charlie,[14] before dying at Bergues on 26 October 1748. He is buried in Bergues Cemetery where there is a memorial to him.

It is notable that one of his acts whilst in charge of Edinburgh was to order that there be no reprisals against the Whigs for their opposition to the Prince. He had previously given orders to care for the prisoners after Prestonpans, and later he would ensure that Glasgow did not suffer any reprisals for its loyalty to George II. Such acts contributed to his reputation for humanity; he became known to both friends and foes as the "Gentle Lochiel", a name that carried into the romantic myths which would grow up around the Rising.