From Infogalactic: the planetary knowledge core
Jump to: navigation, search
For the American engineer, see Donald A. Coggan.

Frederick Donald Coggan, Baron Coggan PC (9 October 1909–17 May 2000) was the 101st Archbishop of Canterbury from 1974 to 1980, during which time he visited Rome and met the Pontiff, in company with Bishop Cormac Murphy-O'Connor, future cardinal and Archbishop of Westminster. Previously he was chairman of the joint committee responsible for the translation of the New English Bible.

Coggan was born in Highgate, London, England. His father Cornish Arthur Coggan served as Mayor of St Pancras and was National President of the Federation of Meat Traders. He was unwell as a child and was taught by a neighbour for four years. He was then educated at Merchant Taylors' School, Northwood in its former location at Charterhouse Square, City of London and was awarded an open exhibition, then a full scholarship to St. John's College, Cambridge. He studied oriental languages from 1928 to 1931 and took a first in both parts of the tripos, achieving a rare and distinguished double first. Whilst there he also served as treasurer and vice-president of the Cambridge Inter-Collegiate Christian Union. He then had positions as an assistant lecturer in Semitic languages and Literature at the University of Manchester (1931–1934), professor of New Testament at Wycliffe College in Toronto (1937–1944) and principal of the London College of Divinity (1944–1956). 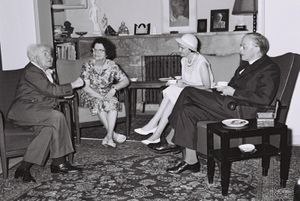 Donald Coggan, Archbishop of York and his wife calling on P.M. David Ben Gurion and his wife during a visit in Israel, August 1961

Coggan served as curate of St Mary's Church, Islington from 1934 to 1937. He was ordained a priest in 1935, appointed Bishop of Bradford in 1956 and translated to Archbishop of York in 1961. After his retirement as Archbishop of Canterbury he was granted a life peerage and made Baron Coggan, of Canterbury and Sissinghurst in the County of Kent.

Coggan's tenure as archbishop was noted for his strong support for the ordination of women (which did not happen in the Church of England until 1994), having proposed it at the Lambeth Conference of the world's Anglican bishops in 1970. His comparatively brief tenure was marked by his boldness, orderliness and punctuality.

Among his other roles was being Honorary President of the United Bible Societies from 1957 to 1976. His knowledge of the scriptures meant he made an enormous contribution to the furthering of the organisation. He also founded the Lord Coggan Memorial Fund which helped to supply Russian children with copies of the Bible.

Known for his warm welcome, he is commonly credited with remarking that "The art of hospitality is to make guests feel at home when you wish they were."[1]

Aside from his duties of his primacy, Coggan was a prolific writer – his works including Call to the Nation (1975). He was also a speaker and preacher, often accompanied by his wife, Jean Braithwaite with whom he had two daughters.[2] He died in Winchester, Hampshire.[3] He was cremated and his ashes buried in the cloister garden at Canterbury Cathedral. His wife's ashes were also buried there.