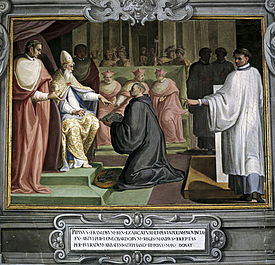 File:Donation de Pépin le Bref à l'abbaye de Saint-Denis en 768. - Archives Nationales - AE-II-33.jpg The "Donation of Pepin", the first in 754, and second in 756, provided a legal basis for the formal organizing of the "States of the Church",[1] or "Papal States", which inaugurated papal temporal rule over civil authorities. The Donations were bestowed by Pepin the Short only three years after he became the first civil ruler appointed by a Pope, about the year 751.[2]

In 751, the Lombards under their king Aistulf (also known as Astolfo) had conquered the Exarchate of Ravenna, the main seat of Byzantine government in Italy, whose exarch held territorial power as the representative of the Eastern Roman Emperor, independent of the Pope of Rome. The Lombard Duke of Spoleto and the Lombard kings posed a threat to Roman territory, and Aistulf demanded tribute from Pope Zachary, an able diplomat. After Zachary died in March 752, and after the death of his successor Pope-elect Stephen a mere three days after his own election in March 752, the eventual successor, Pope Stephen II, went to meet Pepin the Short (who had been crowned at Soissons with Zachary's blessing) at Quiercy-sur-Loire in 753, marking the first time a Pope had crossed the Alps. The Pope was first met by Pepin's eleven-year-old son, Charles, who conveyed him to his father in Ponthion. At Quiercy the Frankish nobles finally gave their consent to a campaign in Lombardy. Roman Catholic tradition asserts that it was then and there that Pepin executed in writing a promise to convey to the Papacy certain territories that were going to be wrested from the Lombards. No original document has been preserved, but later 8th century sources quote from it and the "Fragmentum Fantuzzianum" probably relied on it.[3]

On July 28, 754 Pope Stephen anointed Pepin, as well as his two sons Charles and Carloman, at Saint-Denis in a memorable ceremony that was recalled in coronation rites of French kings until the end of the ancien regime in the French Revolution of 1789-1799.

In return, in 756, Pepin and his Frankish army forced the last Lombard king to surrender his conquests, and Pepin officially conferred upon the pope the territories belonging to Ravenna, even cities such as Forlì with their hinterlands, laying the Donation of Pepin upon the tomb of Saint Peter, according to traditional later accounts.[citation needed] The gift included Lombard conquests in the Romagna and in the Duchy of Spoleto and Benevento, and the Pentapolis in the Marche (the "five cities" of Rimini, Pesaro, Fano, Senigallia and Ancona). The Donations allowed the Pope to reign for the first time as a temporal ruler. This strip of territory extended diagonally across Italy from the Tyrrhenian to the Adriatic. Over these extensive and mountainous territories the medieval Popes were unable to exercise effective sovereignty, given the pressures of the times, and the new Papal States preserved the old Lombard heritage of many small counties and marquisates, each centered upon a fortified rocca.[citation needed]

Pepin confirmed his Donations in Rome in 756, and in 774 his son Charlemagne again confirmed and reasserted the Donation.