Donna Jean (Thatcher) Godchaux-MacKay (born August 22, 1947) is an American singer, best known for having been a member of the Grateful Dead from 1972 until 1979.

Donna Jean Thatcher was born in Florence, Alabama. Prior to 1970, she had worked as a session singer[1] in Muscle Shoals, Alabama, eventually singing with a group called Southern Comfort and appearing as a backup singer on at least two #1 hit songs: "When a Man Loves a Woman" by Percy Sledge in 1966 and "Suspicious Minds" by Elvis Presley in 1969. Her vocals were featured on other classic recordings by Boz Scaggs and Duane Allman, Cher, Joe Tex, Neil Diamond and many others.[2][3] She then moved to California and met future fellow Grateful Dead member Keith Godchaux, whom she married in 1970.[4]

Donna introduced Keith to Jerry Garcia after Garcia's performance at San Francisco's Keystone Korner in September 1971. At the time, Donna Jean was not working as a musician. She joined the band shortly afterwards, remaining a member until February 1979.

Donna Jean provided back-up and lead vocals in the group's music. During their membership in the Grateful Dead, the couple also issued the mostly self-written Keith & Donna album in 1975 with Jerry Garcia as a Keith and Donna Band member. In turn, they performed as part of the Jerry Garcia Band.

Keith and Donna's son, Zion "Rock" Godchaux of BoomBox, was born in 1974. After the Grateful Dead, the couple started the Heart of Gold Band.

Donna did not perform again with any Grateful Dead band members until after the death of Jerry Garcia. Shortly after her husband's death in 1980, Donna Jean turned to religion.[5] She married bassist David MacKay (former Fiddleworms member and bassist for the Donna Jean Godchaux Band) and the couple moved to her childhood town of Florence, Alabama, to record at the Muscle Shoals Sound Studios.

In 1994, Donna Jean was inducted into the Rock and Roll Hall of Fame as a member of the Grateful Dead.[7] She resides in Killen, Alabama, and remains an active member of the Muscle Shoals music scene when not touring with the Donna Jean Godchaux Band with Jeff Mattson.

As group leader or co-leader 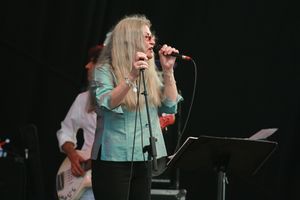 With the Grateful Dead

Donna Godchaux was a member of the Grateful Dead from 1972 to 1979 and appears on many of the band's albums.[8]