From Infogalactic: the planetary knowledge core
Jump to: navigation, search
This article is about the theoretical world-ending destruction. For the professional wrestling maneuver, see Doomsday Device. For other uses, see Doomsday machine (disambiguation). 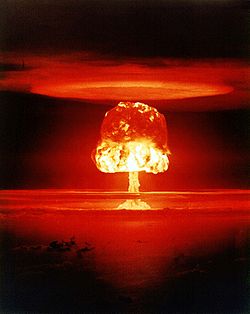 Many hypothetical doomsday devices are based on the fact that salted hydrogen bombs can create large amounts of nuclear fallout.

A doomsday device is a hypothetical construction — usually a weapon, or collection of weapons — which could destroy all life on a planet, particularly the Earth, or destroy the planet itself, bringing "doomsday", a term used for the end of planet Earth. Most hypothetical constructions rely on the fact that hydrogen bombs can be made arbitrarily large assuming there are no concerns about delivering them to a target (see Teller–Ulam design) or that they can be "salted" with materials designed to create long-lasting and hazardous fallout (e.g., a cobalt bomb).

Doomsday devices and the nuclear holocaust they bring about have been present in literature and art especially in the 20th century, when advances in science and technology made world destruction (or at least the eradication of all human life) a credible scenario. Many classics in the genre of science fiction take up the theme in this respect.

Since the 1954 Castle Bravo thermonuclear weapon test demonstrated the feasibility of making arbitrarily large nuclear devices which could cover vast areas with radioactive fallout by rendering anything around them intensely radioactive, nuclear weapons theorists such as Leo Szilard conceived of a doomsday machine, a massive thermonuclear device surrounded by hundreds of tons of cobalt which, when detonated, would create massive amounts of Cobalt-60, rendering most of the Earth too radioactive to support life. RAND strategist Herman Kahn postulated that Soviet or US nuclear decision makers might choose to build a doomsday machine that would consist of a computer linked to a stockpile of hydrogen bombs, programmed to detonate them all and bathe the planet in nuclear fallout at the signal of an impending nuclear attack from another nation.

The doomsday device's theoretical ability to deter nuclear attack is that it would go off automatically without human aid and despite human intervention. Kahn conceded that some planners might see "doomsday machines" as providing a highly credible threat that would dissuade attackers and avoid the dangerous game of brinkmanship caused by the massive retaliation concept which governed US/Soviet nuclear relations in the mid-1950s. However, in his discussion of doomsday machines, Kahn raises the problem of a nuclear-armed nth country triggering a doomsday machine, and states that he didn't advocate that the US acquire a doomsday machine.[1]

For many, the scheme epitomized the extremes of the suicidal logic behind the strategy of mutual assured destruction; the idea was famously parodied in the Stanley Kubrick film from 1964, Dr. Strangelove or: How I Learned to Stop Worrying and Love the Bomb.

The Dead Hand (or "Perimeter") system built by the Soviet Union during the Cold War has been called a "doomsday machine" due to its fail-deadly design and nuclear capabilities.[2]