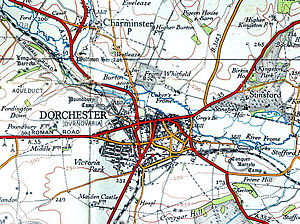 The station opened on 1 June 1847 when the Southampton and Dorchester Railway was completed.[1][2] The station was built as an east facing terminus with the intent of continuing the line westwards towards Exeter.[3] These plans were never realised, and instead another line was built from the terminus towards Weymouth. This joined with the Great Western Railway's line (now the Heart of Wessex Line) from Dorchester West and continued as a joint line to Weymouth.[citation needed]

Originally named Dorchester, the station was renamed Dorchester South on 26 September 1949.[1] The station remained a terminus with trains from Bournemouth having to enter the station, reverse out back the way they came then reverse again and proceed to Weymouth. Trains from Weymouth had to pass the station, then reverse into it, and then back out.[3] This process often caused delays and brought criticism following an accident in 1877. As a result, a curved platform was provided for southbound trains; this was brought into use during 1878.[4] Eastbound trains still reversed into the original platform until 1970 when a platform was built on the curve. The buildings on the trackless original platform remained in use until 1989. As part of the modernisation work preparatory to electrification a new booking hall was built on the curved platform, replacing the building on the original platform which was then demolished.

The Southampton and Dorchester Railway constructed a motive power depot at the station in 1847 together with a coal stage and turntable. This closed in 1957 and was demolished soon afterwards.[5]

Although the current station was rebuilt only in 1989, there are plans for a new station on the current site in the coming years. Also, the Eldridge Pope Brewery site is being redeveloped with hotels, apartments and houses. It is planned to turn the station into the first ever solar-powered railway station in Britain. This would take several years to come into action, but the station would not change drastically: the building on Platform 1 would have a new solar panel as a roof.[citation needed]

As part of a modernisation scheme of the station, during late 2010/early 2011, CCTV monitor podiums were installed on platform 1 (similar to those used on the London Underground) so as to allow the guards of each London-bound train have easier visuals of the platforms (because platform 1 has a tight "inside" curve, and makes it difficult to see the length of the platform whilst a train is in the vicinity of the station. New entrances have also been constructed from the southern end of platform 1 to the adjacent car park, as well as new waiting shelters built near the new entrance, as well as on the site of the former brick hut on platform 2. 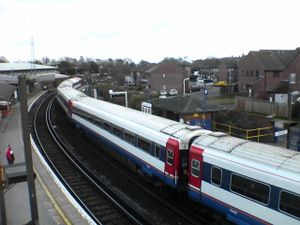 The station is served by South West Trains. Services originate from London Waterloo or Weymouth Station on the South Western Main Line and are most commonly operated by Class 444 but are sometimes served by Class 450 electric multiple units during times of engineering work (i.e. when they are not required for use on lines near Portsmouth) or at peak times.