From Infogalactic: the planetary knowledge core
Jump to: navigation, search
For the character in the Inkheart trilogy, see Inkdeath. 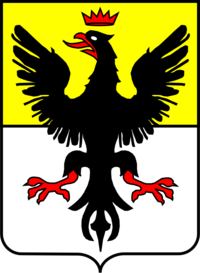 Coat of Arms of the Doria family

Doria, originally de Auria (from de filiis Auriae), meaning "the sons of Auria", and then de Oria or d'Oria, is the name of an old and extremely wealthy Genoese family who played a major role in the history of the Republic of Genoa and in Italy, from the 12th century to the 16th century. 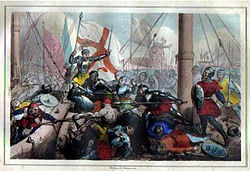 The Battle of Meloria, 1284 a major victory of Oberto Doria followed by his brother, Lamba Doria's victory in 1298 at Curzola

According to legend, a noble Genoese lady named Auria or Oria della Volta fell in love with a noble pilgrim who was going to Jerusalem for the First Crusade; his name was Arduino di Narbonne but their children were named after the mother—de Oria, the children of Oria. Arduino was a typical name of the Arduinici family of the Piemonte, some of whose members bore the title of Counts of Auriate; one might then speculate that one of the Arduinici of Auriate gave origin to this family, which suddenly appears in history as a local major power in Liguria in the late 11th century.

Documentary evidence refers to two members of that family, Martino and Genuardo, in 1110; they are called filii Auriae (the sons or children of Oria). The Doria had fiefs in Sardinia from the 12th century to the 15th century, and also in Dolceacqua, Oneglia and Portofino, in the Riviera to the west of Genoa. Although uncommon, Doria is also known as a female first name. 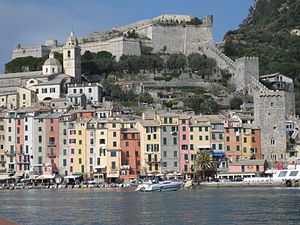 The Doria Castle (up in the photo) in Portovenere 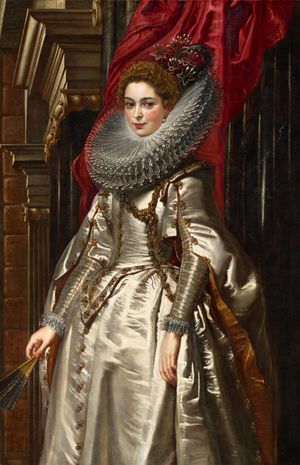 Simon Doria lived in the late 12th century and was an admiral of the Genoese in the crusaders' assault against Saint Jean d'Acre. Percivalle Doria, who died in 1275 fighting for the Ghibelline, was an infamous warlord and a well-known Provençal poet. Also a poet, Simon Doria was podestà of Savona and Albenga. The brothers Oberto Doria and Lamba Doria were naval commanders and politicians: Oberto was Captain of the People in Genoa and led its naval forces in the victory of La Meloria against Pisa in 1284 while Lamba won a major battle against Venetian Andrea Dandolo at Curzola in 1298. Tedisio Doria (or Teodosio) financed the expedition of Vadino and Ugolino Vivaldi in 1291. Branca Doria is mentioned by Dante in the Divine Comedy because of his treacherous murder of Michele Zanche, his father-in-law, in 1275. Brancaleone Doria ruled the Giudicato of Arborea and nearly conquered the whole of Sardinia in the late fourteenth century.

Ottone Doria commanded the 5,000 or more Genoese crossbowmen hired by the French for the Battle of Crécy against the English, in August 1346. Like many of his troops, he was killed in the battle, where the Genoese ended by being attacked by both sides. Heavy rain had made their bowstrings wet and useless (unlike those of the English longbows, they could not easily be removed) so Ottone ordered a retreat. The French cavalry saw this as cowardice and attacked them, while others were slain by the English bowmen.

The family had relationships with political entities both in and out of Europe. During the attempts by the Mongol ilkhanate ruler Abaqa to form a Franco-Mongol alliance, his strategy included a strengthening of ties with the Genoese. Many male children of the Doria family were named after foreign rulers, such as Abaga (Abaqa Khan), Casano (Ghazan Khan), and Aitone, named after Hayton, or Hethum I, king of Cilician Armenia.[1]

Members of the Doria family bore the titles of Prince of Melfi (Doria-Pamphili branch), of Princes of Centola (Doria d'Angri branch), of Counts of Montaldeo, Marquesses of Ciriè e del Maro, Marquesses of San Columbano, Lords of Oneglia, among many others. Agnatic members of the family are marchesi al cognome, that is, bear the title of marquess attached to the family name as a courtesy title.

Non-agnatic princely branches like the Colonna-Doria are still flourishing. There are also titled branches outside Italy, such as the Porrata Doria family in Spain, which rank as marquesses.

Role in the great explorations

The Doria clan helped finance the Portuguese and Spanish navigations in the late 15th and 16th centuries. Francesco Doria, a banker at Seville, financed Christopher Columbus's expeditions, and his son Aleramo Doria was a banker to King John III of Portugal until 1556. Finally, Aleramo's daughter Clemenza Doria was one of the earliest settlers in the 16th-century Portuguese colonization of Brazil. Clemenza Doria married twice; her second husband was Fernão Vaz da Costa (c. 1520–1567), son of Portuguese Chief Justice Cristóvão da Costa and a great-grandson of the legendary navigator Soeiro da Costa; they originated the Costa Doria family which is still thriving today as one of their members, José Carlos Aleluia [da Costa Doria], is a representative in the Brazilian congress, and businessman João Doria Jr. or João Agripino da Costa Doria III held a cabinet-level position in the José Sarney administration in Brazil (1985–1989).

The genoese Lodisio Doria, knight of Christ's Order, settled in the island of Madeira. Their descendants are the Teixeira Doria, lords of Pena d'Aguia, and França Doria families, which also have as direct ancestor the Portuguese navigator Tristão Vaz. The França Doria branch is headed by the Count of Calçada, with a younger branch headed by the Viscount of Torre Bela.

The name Doria was used in Cornelia Funke's "Inkheart" series (specifically, the book "Inkdeath") for a semi-main character who eventually fell in love with the teenage heroine.