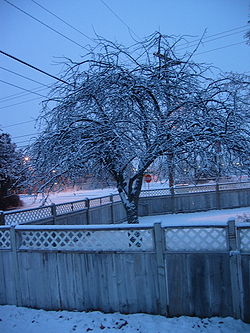 During winter dormancy, plant metabolism virtually comes to a standstill due, in part, to low temperatures that slow chemical activity.[1]

Dormancy is a period in an organism's life cycle when growth, development, and (in animals) physical activity are temporarily stopped. This minimizes metabolic activity and therefore helps an organism to conserve energy. Dormancy tends to be closely associated with environmental conditions. Organisms can synchronize entry to a dormant phase with their environment through predictive or consequential means. Predictive dormancy occurs when an organism enters a dormant phase before the onset of adverse conditions. For example, photoperiod and decreasing temperature are used by many plants to predict the onset of winter. Consequential dormancy occurs when organisms enter a dormant phase after adverse conditions have arisen. This is commonly found in areas with an unpredictable climate. While very sudden changes in conditions may lead to a high mortality rate among animals relying on consequential dormancy, its use can be advantageous, as organisms remain active longer and are therefore able to make greater use of available resources.

Hibernation is a mechanism used by many mammals to escape cold weather and food shortage over the winter. Hibernation may be predictive or consequential. An animal prepares for hibernation by building up a thick layer of body fat during late summer and autumn that will provide it with energy during the dormant period. During hibernation, the animal undergoes many physiological changes, including decreased heart rate (by as much as 95%) and decreased body temperature. Animals that hibernate include bats, ground squirrels and other rodents, mouse lemurs, the European hedgehog and other insectivores, monotremes and marsupials. Although hibernation is almost exclusively seen in mammals, some birds, such as the common poorwill, may hibernate.

Diapause is a predictive strategy that is predetermined by an animal's genotype. Diapause is common in insects, allowing them to suspend development between autumn and spring, and in mammals such as the roe deer (Capreolus capreolus, the only ungulate with embryonic diapause[citation needed]), where a delay in attachment of the embryo to the uterine lining ensures that offspring are born in spring, when conditions are most favorable.

Aestivation, also spelled estivation, is an example of consequential dormancy in response to very hot or dry conditions. It is common in invertebrates such as the garden snail and worm but also occurs in other animals such as the lungfish.

Brumation is an example of dormancy in reptiles that is similar to hibernation.[2][3] It differs from hibernation in the metabolic processes involved.[4]

Reptiles generally begin brumation in late fall (more specific times depend on the species). They often wake up to drink water and return to "sleep". They can go for months without food. Reptiles may want to eat more than usual before the brumation time but eat less or refuse food as the temperature drops. However, they do need to drink water. The brumation period is anywhere from one to eight months depending on the air temperature and the size, age, and health of the reptile. During the first year of life, many small reptiles do not fully brumate, but rather slow down and eat less often. Brumation is triggered by lack of heat and the decrease in the hours of daylight in winter, similar to hibernation.

Dormancy is not relevant for viruses as they are not metabolically active themselves. Some viruses are physically stable and may remain infectious for long periods of time, such as poxviruses and picornaviruses. Some viruses may infect cells and then remain inactive for some time, for example Herpesviruses.

In plant physiology, dormancy is a period of arrested plant growth. It is a survival strategy exhibited by many plant species, which enables them to survive in climates where part of the year is unsuitable for growth, such as winter or dry seasons.

Many plant species that exhibit dormancy have a biological clock that tells them when to slow activity and to prepare soft tissues for a period of freezing temperatures or water shortage. On the other hand, dormancy can be triggered after a normal growing season by decreasing temperatures, shortened day length, and/or a reduction in rainfall. Chemical treatment on dormant plants has been proven to an effective method to break dormancy, particularly in woody plants such as grapes, berries, apples, peaches and kiwis. Specifically, hydrogen cyanamide stimulates cell division and growth in dormant plants, causing budbreak when the plant is on the edge of breaking dormancy.[citation needed] Slight injury of cells may play a role in the mechanism of action. The injury is thought to result in increased permeability of cellular membranes.[citation needed] The injury is associated with the inhibition of catalase, which in turn stimulates the pentose phosphate cycle. Hydrogen cyanamide interacts with the cytokinin metabolic cycle, which results in triggering a new growth cycle.[citation needed] The images below show two particularly widespread dormancy patterns amongst sympodially growing orchids: 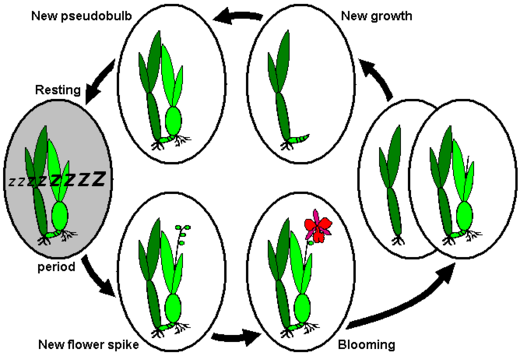 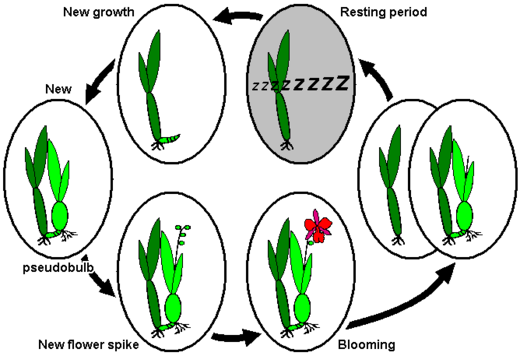 When a mature and viable seed under a favorable condition fails to germinate, it is said to be dormant. Seed dormancy is referred to as embryo dormancy or internal dormancy and is caused by endogenous characteristics of the embryo that prevent germination (Black M, Butler J, Hughes M. 1987). The oldest seed that has been germinated into a viable plant was an approximately 1,300-year-old lotus fruit recovered from a dry lakebed in northeastern China.[5] Dormancy should not be confused with seed coat dormancy, external dormancy, or hardseededness, which is caused by the presence of a hard seed covering or seed coat that prevents water and oxygen from reaching and activating the embryo. It is a physical barrier to germination, not a true form of dormancy (Quinliven, 1971; Quinliven and Nichol, 1971).

Typically, temperate woody perennial plants require chilling temperatures to overcome winter dormancy (rest). The effect of chilling temperatures depends on species and growth stage (Fuchigami et al. 1987).[6] In some species, rest can be broken within hours at any stage of dormancy, with either chemicals, heat, or freezing temperatures, effective dosages of which would seem to be a function of sublethal stress, which results in stimulation of ethylene production and increased cell membrane permeability.

Dormancy is a general term applicable to any instance in which a tissue predisposed to elongate or grow in some other manner does not do so (Nienstaedt 1966).[7] Quiescence is dormancy imposed by the external environment. Correlated inhibition is a kind of physiological dormancy maintained by agents or conditions originating within the plant, but not within the dormant tissue itself. Rest (winter dormancy) is a kind of physiological dormancy maintained by agents or conditions within the organ itself. However, physiological subdivisions of dormancy do not coincide with the morphological dormancy found in white spruce (Picea glauca) and other conifers (Owens et al. 1977).[8] Physiological dormancy often includes early stages of bud-scale initiation before measurable shoot elongation or before flushing. It may also include late leaf initiation after shoot elongation has been completed. In either of those cases, buds that appear to be dormant are nevertheless very active morphologically and physiologically.

Dormancy of various kinds is expressed in white spruce (Romberger 1963).[9] White spruce, like many woody plants in temperate and cooler regions, requires exposure to low temperature for a period of weeks before it can resume normal growth and development. This “chilling requirement” for white spruce is satisfied by uninterrupted exposure to temperatures below 7°C for 4 to 8 weeks, depending on physiological condition (Nienstaedt 1966, 1967).[7][10]

Tree species that have well-developed dormancy needs may be tricked to some degree, but not completely. For instance, if a Japanese Maple (Acer palmatum) is given an "eternal summer" through exposure to additional daylight, it grows continuously for as long as two years. Eventually, however, a temperate-climate plant automatically goes dormant, no matter what environmental conditions it experiences. Deciduous plants lose their leaves; evergreens curtail all new growth. Going through an "eternal summer" and the resultant automatic dormancy is stressful to the plant and usually fatal. The fatality rate increases to 100% if the plant does not receive the necessary period of cold temperatures required to break the dormancy. Most plants require a certain number of hours of "chilling" at temperatures between about 0°C and 10°C to be able to break dormancy (Bewley, Black, K.D kendawg 1994).

Short photoperiods induce dormancy and permit the formation of needle primordia. Primordia formation requires 8 to 10 weeks and must be followed by 6 weeks of chilling at 2°C. Bud break occurs promptly if seedlings are then exposed to 16-hour photoperiods at the 25°C/20°C temperature regime. The free growth mode, a juvenile characteristic that is lost after 5 years or so, ceases in seedlings experiencing environmental stress (Logan and Pollard 1976, Logan 1977).[11][12]

Many bacteria can survive adverse conditions such as temperature, desiccation, and antibiotics by endospores, cysts, conidia or states of reduced metabolic activity lacking specialized cellular structures.[13] Up to 80% of the bacteria in samples from the wild appear to be metabolically inactive[14]—many of which can be resuscitated.[15] Such dormancy is responsible for the high diversity levels of most natural ecosystems.[16]

Recent research[17] has characterized the bacterial cytoplasm as a glass forming fluid approaching the liquid-glass transition, such that large cytoplasmic components require the aid of metabolic activity to fluidize the surrounding cytoplasm, allowing them to move through a viscous, glass-like cytoplasm. During dormancy, when such metabolic activities are put on hold, the cytoplasm behaves like a solid glass, freezing subcellular structures in place and perhaps protecting them, while allowing small molecules like metabolites to move freely through the cell, which may be helpful in cells transitioning out of dormancy.[18]