Dorothy Fields (July 15, 1905 – March 28, 1974) was an American librettist and lyricist. She wrote over 400 songs for Broadway musicals and films. Her most well known pieces include "The Way You Look Tonight", "A Fine Romance", "On the Sunny Side of the Street", "Pick Yourself Up", and "You Couldn't Be Cuter." Throughout her career, she collaborated with various influential figures in the American musical theater, including Jerome Kern, Cy Coleman, Irving Berlin, and Jimmy McHugh. Along with Ann Ronell, Dana Suesse, Bernice Petkere, and Kay Swift, she was one of the first successful Tin Pan Alley and Hollywood female songwriters. 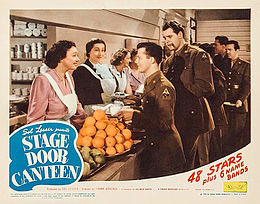 Fields was born in Allenhurst, New Jersey,[1] and grew up in New York City.

Her father, Lew Fields, an immigrant from Poland, was a vaudeville comedian and later became a Broadway manager and producer.

In the 1920s she spent time in London, where she appeared in a regular slot at the "Midnight Follies" as one half of a successful cabaret comedy act ("Silly and Dotty") with the English socialite Lady Sylvia Ashley at the London Metropole.[2]

In 1926, Fields met the popular song composer J. Fred Coots, who proposed that the two begin writing songs together. Nothing actually came out of this interaction and introduction, however Coots introduced Fields to another composer and song-plugger, Jimmy McHugh.[3]

Fields's career as a professional songwriter took off in 1928 when Jimmy McHugh, who had seen some of her early work, invited her to provide some lyrics for him for Blackbirds of 1928. Fields and McHugh teamed up until 1935. Songs from this period include "I Can't Give You Anything But Love", "Exactly Like You", and "On the Sunny Side of the Street." During the later 1920s, she and McHugh wrote specialty numbers for the various Cotton Club revues, many of which were recorded by Duke Ellington.

In the mid 1930s, Fields started to write lyrics for films and collaborated with other composers, including Jerome Kern. With Kern, she worked on the movie version of Roberta, and also on their greatest success, Swing Time. The song "The Way You Look Tonight" earned the Fields/Kern team an Academy Award for Best Original Song in 1936.[4]

Fields returned to New York and worked again on Broadway shows, but now as a librettist, first with Arthur Schwartz on Stars In Your Eyes. (They reteamed in 1951 for A Tree Grows in Brooklyn.) In the 1940s, she teamed up with her brother Herbert Fields, with whom she wrote the books for three Cole Porter shows, Let's Face It!, Something for the Boys, and Mexican Hayride.

In 1946, Fields approached Oscar Hammerstein II with her idea for a new musical based on the life of famous female sharpshooter Annie Oakley. Hammerstein liked the idea and agreed to produce the show. Kern and Fields were signed on to write the songs in the show. Kern died before the two were able to begin working on the project, and Irving Berlin was hired to replace him.[3]

Together, she and her brother Herbert wrote the book for Annie Get Your Gun, while Berlin provided all the music. The show was a huge success, starring Ethel Merman, and running for 1,147 performances.[3]

In the 1950s, her biggest success was the show Redhead (1959), which won five Tony Awards, including Best Musical. When she started collaborating with Cy Coleman in the 1960s, her career took a new turn. Their first work together was Sweet Charity. Her last hit was from their second collaboration in 1973, Seesaw. The show began on Broadway on March 18, 1973, and ended its run on December 8, 1973. Its signature song was "It's Not Where You Start, It's Where You Finish".

Throughout her 48-year career, Fields cowrote more than 400 songs and worked on 15 stage musicals and 26 movies. Her lyrics were known for their strong characterization, clarity in language and humor. She was an amateur pianist and also lifelong lover of the classical music form which led her to become highly aware of melodic lines, so she fitted her lyrics to her melodies.[3]

Fields profesional longevity was rare at the time for a songwriter in the field, and it definitely was due to her unending imagination and her willingness to adapt to the ever modifying trends in the American musical theater.[3]

Dorothy Fields was born to Lew M. fields and Rose Harris. She had two older brothers, Joseph and Herbert, whom also became successful on Broadway, Joseph as a writer and producer, and Herbert as a writer whom later became Dorothy’s collaborator.

Fields went to and graduated in 1923 from the Benjamin Franklin School for Girls in New York City. At school, she was outstanding in the subjects of English, drama, and basketball. Her poems were even published in the school’s literary magazine.

Her family, because of her father was deeply involved in show business. Her father Lew Fields was a Jewish immigrant from Poland, whom partnered with Joe Weber became one of the most popular comedy duos near the end of the nineteenth century. They were known as the Weber and Fields vaudeville act. When the duo separated in 1904, Lew Fields went on to further his career in another direction, by becoming one of the most influential theater producers of his time. From 1904 till 1916, he produced about 40 Broadway shows, and was even nicknamed “The King of Musical Comedy” because of his achievements.

Despite of her natural familial connections to the theatre via her father, he disapproved of her choice to pursue acting and did everything he could to prevent her from becoming a serious actress. This began when he refused to let her take a job with a stock company in Yonkers. Hence Dorothy began working as a teacher and a laboratory assistant, whilst secretly submitting work to magazines behind her father’s back.

Fields had highly disciplined work habits. She was known to spend about eight weeks researching, discussing, and making notes on a project, before finally resolving to her regular 8:30 A.M. to 4:00 P.. daily work routine.[3]

Fields died of a heart attack on March 28, 1974, at the age of 68. The New York Times reported "Dorothy Fields, the versatile songwriter whose career spanned nearly 50 years, died of a heart attack last night at her home here."[5] She was the sister of writers Herbert and Joseph Fields. She married Eli Lahm in 1939, and they had two children, David and Eliza. Lahm died in 1958.[6]

Thirty-five years after her death, President Barack Obama, in his inauguration speech as 44th President of the United States on January 20, 2009, echoed lyrics by Fields when he said, "Starting today, we must pick ourselves up, dust ourselves off, and begin again the work of remaking America".[7] This alludes to the song "Pick Yourself Up" from the 1936 film Swing Time, for which Jerome Kern had written the music, in which Ginger Rogers and Fred Astaire sang Fields's words, "Pick yourself up; dust yourself off; start all over again".[8]