Dorothy Lamour (December 10, 1914 – September 22, 1996) was an American actress and singer. She is best remembered for appearing in the Road to... movies, a series of successful comedies starring Bing Crosby and Bob Hope.[1]

Lamour began her career in the 1930s as a big band singer. In 1936, she moved to Hollywood where she signed with Paramount Pictures. Her appearance as "Ulah" in The Jungle Princess (1936) brought her fame and also marked the beginning of her image as the "Sarong Queen".

In 1940, Lamour made her first Road to... comedy film, Road to Singapore. The Road to... films were popular during the 1940s. The sixth film in the series, Road to Bali, was released in 1952. By that time, Lamour's screen career began to wane and she focused on stage and television work. In 1961, Crosby and Hope teamed up for one more, The Road to Hong Kong, but actress Joan Collins was cast as the female lead. Lamour made a brief appearance and sang a song near the end of that film.

In the 1970s, Lamour revived her nightclub act and, in 1980, released her autobiography My Side of the Road. She made her final onscreen appearance in 1987.

Lamour married her second husband, William Ross Howard III, in 1943. They had two sons and remained married until Howard's death in 1978. Lamour died at her home in 1996 at the age of 81.

Born Mary Leta Dorothy Slaton in New Orleans, the daughter of Carmen Louise (née LaPorte) and John Watson Slaton, both of whom were waiters.[2] Lamour was of French Louisianan, Spanish, and Irish descent. Her parents' marriage lasted only a few years. Her mother married for the second time to Clarence Lambour, whose surname Dorothy later adopted and modified as her stage name.[3] That marriage also ended in divorce when Dorothy was a teenager.

Lamour quit school at the age of 14 and, after taking a business course, worked as a secretary to support herself and her mother. She began entering beauty pageants and was crowned "Miss New Orleans" in 1931. Lamour used the prize money to support herself while she worked in a stock theatre company. She and her mother later moved to Chicago where Lamour found a job working at Marshall Field's department store. She was discovered by orchestra leader Herbie Kay when he spotted her in performance at a Chicago talent show held at the Hotel Morrison. Kay hired her as a singer for his orchestra and, in 1935, Lamour went on tour with Kay. Her work with Kay eventually led Lamour to vaudeville and work in radio.[4] In 1935, she had her own fifteen-minute weekly musical program on NBC Radio. Lamour also sang on the popular Rudy Vallee radio show and The Chase and Sanborn Hour. On January 30, 1944, Lamour starred in "For This We Live," an episode of Silver Theater on CBS radio.[5]

In 1936, Lamour moved to Hollywood. That same year, she did a screen test for Paramount Pictures and signed a contract with them.[4] Lamour began appearing regularly in films for Paramount Pictures. She made her first film for Paramount, College Holiday, in which she has a bit part as an uncredited dancer. Her second film for Paramount, The Jungle Princess (1936), solidified her fame. In the film, Lamour plays the role of "Ulah", a jungle native who wore an Edith Head-designed sarong throughout the film. The Jungle Princess was a big hit for the studio and Lamour would be associated with sarongs for the rest of her career.[6] From 1937 to 1939, Lamour appeared in John Ford's The Hurricane (1937), Spawn of the North (1938; with George Raft, Henry Fonda, and John Barrymore), and Disputed Passage (1939).

In 1940, Lamour co-starred in the first of several Road to... films with Bing Crosby and Bob Hope. The movies were enormously popular during the 1940s, and they regularly placed among the top moneymaking films each year. While the films centered more on Hope and Crosby, Lamour held her own as their "straight man", and sang some of her most popular songs. The series essentially ended with the release of Road to Hong Kong, in 1962, in which Lamour only made a cameo appearance. Actress Joan Collins was the female lead in that picture.

During World War II, Lamour was among the most popular pinup girls among American servicemen, along with Betty Grable, Rita Hayworth, Lana Turner, and Veronica Lake. Lamour was also known for her volunteer working selling war bonds during tours in which movie stars would travel the country selling U.S. government bonds to the public. Lamour reportedly sold $300 million worth of bonds earning her the nickname "The Bombshell of Bombs". She also volunteered at the Hollywood Canteen where she would dance and talk to soldiers. In 1965, Lamour was awarded a belated citation from the United States Department of the Treasury for her war bond sales.[1]

Some of Lamour's other notable films include Johnny Apollo (1940; with Tyrone Power), Aloma of the South Seas (1941), Beyond the Blue Horizon (1942), Dixie (1943; with Bing Crosby), A Medal for Benny (1945), My Favorite Brunette (1947; with Bob Hope), On Our Merry Way (1948), Slightly French (1949) and a supporting role in the best picture Oscar-winner The Greatest Show on Earth (1952; with Charlton Heston). Her other leading men included William Holden, Ray Milland, James Stewart, Jack Benny, and Fred MacMurray.

Lamour emceed Front and Center, a 1947[7] variety comedy show, as a summer replacement for The Fred Allen Show, with the Army Air Force recruiting as sponsors. The show changed to The Sealtest[8] Variety Theater in September[9] 1948.

Lamour starred in a number of movie musicals and sang in many of her comedies and dramatic films as well. She introduced a number of standards, including "The Moon of Manakoora", "I Remember You", "It Could Happen to You", "Personality", and "But Beautiful".

The Road To Bali would prove to be the swansong of Lamour's film career, as she was pushing 40 years old in an industry that placed little value on older actresses. Afterwards, she began a new life as a nightclub entertainer and a stage actress. In the 1960s, she returned to the screen for secondary roles in three films, including John Ford's Donovan's Reef (1963) with John Wayne and Lee Marvin, and became more active in live theater, headlining a road company of Hello Dolly! for over a year near the end of the decade. 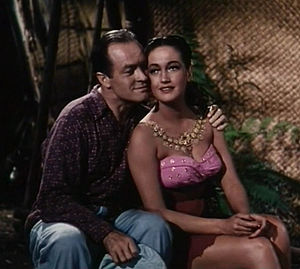 In the 1970s, Lamour was a popular draw on the dinner theatre circuit.

In 1980, Lamour published her autobiography, My Side of the Road and revived her nightclub act. During the remainder of the decade, she performed in plays and television shows such as Hart to Hart, Crazy Like a Fox, Remington Steele and Murder, She Wrote. In 1987, she made one last big-screen appearance in the movie Creepshow 2, appearing with George Kennedy as an aging couple who are killed during a robbery. The wooden, Native American statue in front of their general store comes to life to avenge their death. The 72-year-old Lamour quipped: "Well, at my age you can't lean against a palm tree and sing 'Moon of Monakoora'," she said. "People would look at that and say, 'What is she trying to do?'"[10]

During the 1990s, she made only a handful of professional appearances but remained a popular interview subject for publications and TV talk and news programs. In 1995, the musical Swinging on a Star, a revue of songs written by Johnny Burke opened on Broadway and ran for three months; Lamour was credited as a "special advisor." Burke wrote many of the most famous Road to ... movie songs as well as the score to Lamour's 1944 film And the Angels Sing. It was nominated for the Best Musical Tony Award, and the actress playing her in the road movie segment, Kathy Fitzgerald, was also nominated.

Lamour's first marriage was to orchestra leader Herbie Kay whose orchestra Lamour sang with. The two married in 1935 and divorced in 1939.[11][12]

Early in her career, Lamour met J. Edgar Hoover, director of the Federal Bureau of Investigation. According to Hoover's biographer Richard Hack, Hoover pursued a romantic relationship with Lamour and the two spent a night together at a Washington, D.C. hotel. Lamour was later asked if she and Hoover had a sexual relationship to which she replied, "I cannot deny it."[13] In her 1980 autobiography, My Side of the Road, Lamour does not discuss Hoover in detail, only referring to him as "a lifelong friend".[14]

Lamour died at her home in North Hollywood on September 22, 1996, at the age of 81.[1] She was interred in the Forest Lawn, Hollywood Hills Cemetery in Los Angeles.[20]

Lamour was the heroine of a novel, Dorothy Lamour and the Haunted Lighthouse (1947, by Matilda Bailey), where "the heroine has the same name and appearance as the famous actress but has no connection ... it is as though the famous actress has stepped into an alternate reality in which she is an ordinary person." The story was written for a young teenage audience and is reminiscent of the adventures of Nancy Drew. It is part of a series known as "Whitman Authorized Editions", 16 books published between 1941-1947 that each featured a film actress as heroine.[22]

Lamour's autobiography, My Side of the Road, was published by Prentice-Hall in 1980.[23]

She also had a brief print run of 2-3 issues during the 1950s in "Dorothy Lamour Jungle Princess Comics", a series of comic books dedicated to her on-film Jungle Princess persona (featuring screen shots from past movies as the covers).