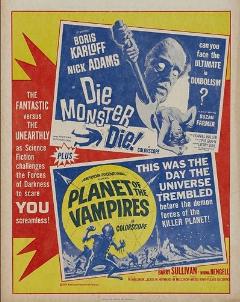 A poster advertising a double feature of Die, Monster, Die! and Planet of the Vampires.

The double feature, also known as a double bill, was a motion picture industry phenomenon in which theatre managers would exhibit two films for the price of one, supplanting an earlier format in which one feature film and various short subject reels would be shown.

Opera houses staged two operas together for the sake of providing long performance for the audience. This was related to one-act or two-act short operas that were otherwise commercially hard to stage alone. A prominent example is double-bill of Pagliacci with Cavalleria rusticana first staged on 22 December 1893 by the Met. The two operas have since been frequently performed as a double-bill, a pairing referred to in the operatic world colloquially as "Cav and Pag". [1]

The term "double bill" was first used as a clever pun to describe the Buffalo Bill and Pawnee Bill Wild West Show. (For a short stint, Gordon William Lillie worked with William Frederick "Buffalo Bill" Cody as the Pawnee interpreter and later was dubbed "Pawnee Bill".) The two "Bills" in one show gave marketers a fun way to say, "for the price of one ticket, you get a 'double Bill'". This "double billing" lead way to movie theatre owners, showing two movies to use the same term.[citation needed]

Later movie theaters, interested in attracting customers during the Great Depression, began changing the way they booked movies. In the 1920s, before the Depression and the advent of sound film (and television), an evening at the cinema would often consist of the following:[citation needed]

Theater owners decided they could both attract more customers and save on costs if they offered two movies for the price of one. In the typical 1930s double bill, the screening began with a variety program consisting of trailers, a newsreel, a cartoon and/or a short film preceding a low-budget second feature (the B movie), followed by a short interlude. Afterward, the high-budget main feature (the A movie) ran. Although the double feature put many short comedy producers out of business, it was the primary source of revenue for smaller Hollywood studios, such as Republic and Monogram, that specialized in B movie production.[citation needed]

Attracted by business a neighborhood theatre running a double feature obtained over a higher-priced first-run theatre with only one feature film, the major studios began making their own B features using the technicians and sets of the studio and featuring stars on their way up or on their way down. The major studios also made film series featuring recurring characters.[citation needed] 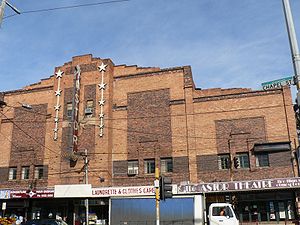 The Astor Theatre in Melbourne has showed double features since its opening in 1936.

The double feature arose partly because of a studio practice known as "block booking," a form of tying in which major Hollywood studios required theaters to buy B-movies along with the more desirable A-movies. The U.S. Supreme Court decided that this practice was illegal in United States v. Paramount Pictures, Inc. in 1948, contributing to the end of the studio system.

Even after the studio requirement was dropped, many smaller or independent neighborhood theatres, especially drive-in theatres, sought double features to bring in more patronage. Sometimes a film would be accompanied by a re-release, either an older feature from a major studio or a rerelease acquired by firms that specialised in rereleasing older films such as Realart and Astor Pictures, otherwise a smaller studio may have been contracted to bring in a low budget second feature. By the end of the 1940s double features were regular policy at 29 percent of American cinemas with 36 percent having them part-time. After the Paramount Decree the sources of the second feature had changed.[2] James H. Nicholson and Samuel Z. Arkoff formed their American International Pictures with the idea of providing a double feature of two B pictures for often less than the price of a single A feature, or taking a lower percentage of the cinema's grosses than the major studios.[3]

By the 1960s, double features had been mostly abandoned in non–drive-ins in favor of the modern single-feature screening, in which only one feature film is exhibited. However, double bills of popular series that had previously been run as a single feature such as the James Bond and Matt Helm superspy genre and The Man With No Name and The Stranger spaghetti westerns were re-released together by the main studios.

While most cinemas have discontinued the practice of showing the double feature, it has nostalgia appeal. The Astor Theatre in St Kilda Melbourne, Australia, established in 1936, continues the tradition of the double feature.

Following the success of Who Framed Roger Rabbit, three Roger Rabbit cartoon shorts were created to be shown as preludes to other Disney films, in an effort to revive the viewing of cartoon shorts before major films. Only three were made and the scheme failed.[4]

Many repertory houses continue to show two films, usually related in some way, back to back.

During the 1990s, many VHS cassettes that showed two films on the same tape (the second was often a sequel to the first film) were self-named as "double features."

In 2007, filmmakers Quentin Tarantino and Robert Rodriguez released their individual films Planet Terror and Death Proof as a double feature under the title Grindhouse, edited together with fake exploitation film trailers and 1970s-era snipes in order to replicate the experience of viewing a double feature in a grindhouse theater. Although Grindhouse received critical acclaim, it was a complete financial flop in the United States. The films were screened individually in international markets and on DVD.

Another recent double feature was the Duel Project, when Japanese directors Ryuhei Kitamura and Yukihiko Tsutsumi created competing films to be shown and voted on by the premier audience.

More recently, two double features of re-released popular films hit the big screen. The first was of the re-release of Toy Story and Toy Story 2 that started October 2, 2009 before the release of Toy Story 3 in the following year. Both films were in Disney Digital 3D in select movie theaters.[5] The second double feature, and the most recent one, was a re-release of Twilight and The Twilight Saga: New Moon for one night only, on June 29, 2010, shortly before the midnight screening of The Twilight Saga: Eclipse in select theaters.[6] In February 2011, it was announced that the 14th Pokémon movie Victini and the Black Hero: Zekrom and Victini and the White Hero: Reshiram, due in July, would be released as a double-feature, though both films are actually "versions" of each other, with differences related to plot points and character designs varying between the version being watched.