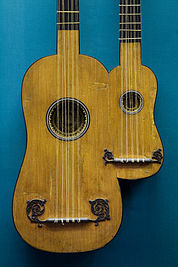 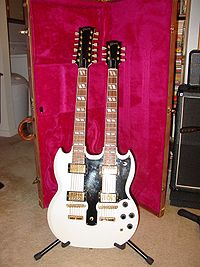 Today, the most common type of multi-neck guitar is the double neck guitar, of which the most common version is an electric guitar with twelve strings on the upper neck, while the lower neck has the normal six. Combination six-string and bass guitar are also used, as well as a fretless guitar with a regular fretted guitar, or any other combination of guitar neck and pickup styles. There are also acoustic versions. Two necks allows the guitarist to switch quickly and easily between guitar sounds without taking the time to change guitars.

There are many ways to customize a multiple-necked guitar, such as the number of strings on a neck, frets or no frets, the tuning used on each neck, etc. One of the earliest designs still in regular use is the acoustic contraguitar, invented around 1850 in Vienna. This guitar, also known as the Schrammel guitar, has a fretted six-string neck and a second, fretless neck with up to nine bass strings.

One of the more common combinations is where one neck of a double-necked guitar is set up as for a 6 string guitar and the other neck is configured as a 4 string bass guitar. Guitarist Pat Smear of the Foo Fighters utilizes a double-necked guitar during live performances (bass guitar top neck, six-string electric guitar bottom neck) in order to perform Krist Novoselic's bass part in the song "I Should Have Known," from the album Wasting Light, in addition to his own duties. Rickenbacker International Corporation and Gibson Guitar Corporation in the USA have both manufactured production models of these configurations in the past.

A less common configuration has a 12 string guitar neck combined with a 4 string bass guitar neck: Geddy Lee of Rush is well known for using the 4/12-string Rickenbacker 4080/12 production model live in the 1970s.

File:MikeRutherfordGenesis.jpg
Mike Rutherford of Genesis, circa 1980, playing a double-necked guitar with a Shergold twelve-string/bass configuration

In the 1970s and 1980s Mike Rutherford of Genesis was known for playing a custom-made Shergold Modulator twin-neck guitar-bass unit in live shows, as he frequently changed between lead guitar, 12-string guitar and bass guitar, depending on the arrangement of the song. The unique design concept of Rutherford's Shergold guitar set is that it consists of several interchangeable modular elements, each of which could be separated and recombined, and which attached to the other units through a system of dowels and thumbscrews, and an electrical connector. The complete original set consisted of a "top section" 6-string guitar, two "top-section" 12-string guitars (each in a different tuning), and a "bottom-section" 4-string bass. Each section could be separated and re-attached to create a variety of twin-neck combinations, with either the 6-string or one of the two 12-strings on the top, and the 4-string bass on the bottom, and there was a matching lower-body section which could be attached to the 6-string and 12-string main units, which created a single complete guitar when these were not attached to the bass.[1] (As a tongue-in-cheek reference to this, the puppet version of Rutherford in the video for Land of Confusion plays a four-necked guitar.)

Electric bass guitars with two or more necks have existed at least since the 1970s. Some basses have three or more necks, but usually upon custom order only. A double-necked bass guitar can be used for multiple tuning (e.g., B-E-A-D on one neck and E-A-D-G on the other, etc.); combining fretted and fretless necks; combining necks with different numbers of strings, etc.

Carvin made double-necked guitars and basses from 1959 to 1993; their business model relies greatly on custom-made instruments, and it has produced a number of double-neck bass guitars, including one with a fretted and a fretless neck, the DN440T, made for Steve McDonald.[2]

One of the best-known multiple-necked bass guitars is that used by Chris Squire (of Yes) for the song "Awaken." This is a replica of a guitar built by Wal for Roger Newell of the English Rock Ensemble. Squire's original triple-necked bass guitar had a four-string fretted neck, a four-string fretless neck, and a six-string tuned in octaves (tuned to aA-dD-gG). This bass is currently on display at the Hard Rock Cafe.[citation needed] Steve Digiorgio used a multiple-necked bass guitar with a fretless neck and another fretted neck. A number of makers have also produced double neck basses with an 8-string bass neck (double courses, tuned in octaves like a 12-string guitar) on top and a 4-string bass neck on the bottom. Double neck basses with various other combinations exist, for example four string and five string bass four string and six string bass, etc.

Multiple neck "guitars" have also been made which include other stringed instruments among the alternate necks. Country guitarist Joe Maphis famously played a double-neck Mosrite instrument that had a regular 6-string neck on the bottom and an "octave guitar" for the top neck. This was a 6-string neck tuned an octave higher than the standard guitar, that both extended the range of the instrument, and allowed Maphis to play mandolin-like sounds. Between 1958-1968, Gibson made an instrument of this type which it called the "Double Mandolin" (Gibson EMS 1235).[3] Hybrids with a 6-string guitar neck and a true 8-string mandolin neck were also made (e.g., the 1971 Dawson Electric guitar/mandolin). And Led Zeppelin's John Paul Jones has a triple-neck electroacoustic instrument, custom made for him by luthier Andy Manson, which features (from top to bottom) 8-string mandolin, 12-string guitar, and 6-string guitar necks.[4]

In 2011, the National Guitar Museum unveiled the "Rock Ock", which it calls the world’s largest fully playable multi-necked stringed instrument. The 8-necked guitar weighs 40 pounds, has 154 frets, 51 strings, and 8 necks. The eight instruments are a mandolin, ukulele, 6-string, fretless bass, standard bass, 12-string, baritone guitar, and a 7-string. The guitar was designed by noted artist Gerard Huerta (responsible for the iconic AC/DC logo, among others) and built by Dan Neafsey of DGN Custom Guitars. The guitar hardware was supplied by Mojo Musical Supply while the instrument itself was commissioned by the National Guitar Museum. The instrument has been used in live performance and can be seen on YouTube.[5] 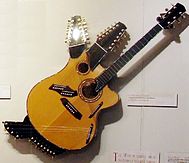 Some luthiers not only built guitars with two necks in common configurations, but worked to expand the possibilities with multiple necks, extra bridges, odd configurations, and the like. Hans Reichel crafted a series of third bridge guitars with two necks on both sides of the body. Linda Manzer crafted the Pikasso guitar (a three neck guitar with 42 strings) for Pat Metheny. Solmania is an Osaka-based noise music band known for making their own experimental electric guitars out of spare parts. The guitars usually take an extremely bizarre form, utilizing unconventional body shapes, extra necks, strings and pickups in unusual places, and various extraneous gadgets such as microphones. Most of their instruments are double neck guitars or harp guitars.

Many of those who have played double neck guitars report that the instruments are heavy and awkward,[6][7][8] but this can be managed with practice. Triple neck instruments are even weightier and more unwieldy. This raises the question as to whether some of the larger varieties of multi-neck guitar are even playable as guitars, much less practical in performance situations. The bottom neck of Rick Nielsen's famous five-neck Hamer guitar is barely reachable by a person of average stature holding the instrument in a normal standing playing position, and it's hard to see how that neck could be played with any facility with both arms extended to their limit just to reach it. Although playable hybrids with up to eight necks have been produced (see the "Rock Ock", above), five necks would seem to be the practical limit for multi-neck guitars.

Luthiers seem, however, to be undeterred by either practicality, or by the limits of human anatomy, and have produced instruments with even more necks. In 2008 Macari's Music of London commissioned a six neck guitar ("the beast"),[9] similar in design to Nielsen's five neck. Yamantaka Eye, of the Japanese noise/rock band Boredoms has toured with a seven neck guitar (the "Sevena"). This instrument has four necks on one side and three on the other, and is mounted on a stand and played with drumsticks as a percussion instrument.

As of 2012[update], the most necks placed on a single guitar is 12, apparently first achieved in 2002 by Japanese artist Yoshihiko Satoh.[10]

File:100 5623.JPG
Dave Mustaine playing a Dean twin neck. Note the machine heads for the 12 string secondary strings on the edge of the body.
File:Jperryaerosmith.jpg
Joe Perry of Aerosmith playing a double neck Gretsch guitar on stage in Chile

8Richard Dodson of The Stampeders designed his own Fender Double-neck guitar.