For the article on the baseball umpire, see: Doug Harvey (umpire)

Douglas Norman Harvey (December 19, 1924 – December 26, 1989) was a Canadian professional hockey player who played in the National Hockey League (NHL) from 1947 until 1964, and from 1966 until 1969. He is widely regarded as one of the greatest defencemen ever to play the game, winning the James Norris Memorial Trophy as the league's top defenceman on seven occasions.[1][2] 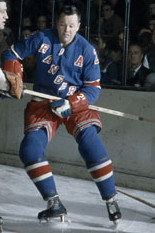 Harvey played minor league hockey in Oxford Park, Notre Dame de Grace in his native Montreal, Quebec, Canada, then began his professional career with the Montreal Royals of the Quebec Senior Hockey League where he played from 1945 to 1947, helping them win the Allan Cup. He then played one season with the Buffalo Bisons of the American Hockey League. He made the jump to the Montreal Canadiens of the NHL in the 1947–48 NHL season and remained with the team until 1961.

Under coach Dick Irvin, Harvey was named to the All-Star team 11 consecutive times, beginning in the 1951–52 NHL season. He won his first of seven James Norris Memorial Trophies in 1955, as the league's best defenceman. In an era when the defenceman's role did not include scoring points, Harvey used his skating speed and passing ability to become a factor in making the Canadiens a high-scoring team.

He earned six Stanley Cups, all with Montreal. In 1954, however, he scored a Cup-losing own-goal when he tipped the puck with his glove, after a deflected shot by Tony Leswick of the Detroit Red Wings and past goalie Gerry McNeil. McNeil was so crushed by the goal, he retired to coach junior hockey the next season, but returned to the Habs in 1956.

Harvey became an outspoken critic of the hockey establishment who "owned" players for life. In Harvey’s day, players were paid a pittance compared to the millions being earned by the team owners. A superstar such as Harvey, who today would be paid millions, was earning less than $30,000 a season ($274,634 in 2008 dollars)[3] at the peak of his career while playing every game in front of sell-out crowds. Harvey was one of the first to help organize the players association which so infuriated the Canadiens’ owners that in 1961 they traded him to the then lowly New York Rangers. One of the individuals secretly blacklisted by the league owners,[citation needed] Harvey responded by winning still another Norris Trophy as a Ranger. He remained with New York until 1963, and then played for several minor league teams before finishing his NHL career in 1969 with the St. Louis Blues. Harvey served as player-coach during his first season in New York but was never entirely comfortable with this dual role.[4] In addition, he was also listed as Coach for the Kansas City Blues, which was the farm team affiliate for the St Louis Blues in 1967-68.[5]

In 1964 Harvey, Gump Worsley, and Red Berenson played for the Montreal Jr. Canadiens in a game against the Soviet national team. Harvey played almost 50 minutes during the 3–2 loss.[6]

Well into his forties, with limited education and no other skills besides hockey, Harvey eked out a living playing in the minor-pro leagues and with an assistant coaching tenure in the World Hockey Association. Although he was unanimously voted into the Hockey Hall of Fame in 1973, because of his involvement with the players' association, his sweater number wasn't retired by the Montreal Canadiens until 1985.[citation needed]

For years, Harvey battled alcoholism while suffering from bipolar disorder. In 1985 he was offered a job with the Montreal Canadiens as a scout. For 3 years, Harvey lived in the private railway car of Olive and John Diefenbaker, which was purchased years earlier by Joe Gorman, T. P. Gorman's son, and placed at the Connaught Park Racetrack entrance. Harvey's last Stanley Cup victory came in 1986, when the Montreal Canadiens were once again the winners. He died three years later due to cirrhosis of the liver, only a week after his 65th birthday, and was interred in the Notre-Dame-des-Neiges Cemetery in Montreal.

In 1998, he was ranked number 6 on The Hockey News' list of the Top 100 NHL Players of All Time. At the time, he was the highest-ranking deceased player.

The government of Canada honoured Doug Harvey in 2000 with his image placed on a Canadian postage stamp.

In 2002, a book on his life was published. Titled Doug: The Doug Harvey Story, it was written by William Brown, with a foreword by his former teammate Jean Béliveau. His #2 jersey was retired by the Montreal Canadiens on October 26, 1985.

The former Confederation Arena renamed itself to Doug Harvey Arena in 1966.