The Douglas B-66 Destroyer was a U.S. Air Force Tactical Air Command light bomber based on the United States Navy's A-3 Skywarrior carrier-based heavy attack aircraft. It was intended to replace the Douglas A-26 Invader. An RB-66 photo-reconnaissance version was ordered simultaneously. The USAF B-66 retained the three-man crew from the US Navy A-3, but incorporated ejection seats that the US Navy variant lacked.

At first the USAF thought the conversion would be an easy matter of removing the carrier-specific features, so no prototypes were ordered, just five pre-production RB-66A models (the reconnaissance mission being considered a high priority). The list of modifications grew, and before long, the supposedly "easy" conversion became what was substantially a new aircraft. Many of the changes were due to the USAF's requirement for low-level operations, while the Navy version had originally been designed and employed as a high-altitude nuclear strike bomber. Two major differences between the A-3 and the B-66 consisted in the types of jet engines used, and the emergency crew egress systems. The A-3 had two J57 turbojet engines, whereas the B-66 had two Allison J71s. The B-66 was equipped with ejection seats whereas the A-3 was not.

The basic B-66 "Destroyer" design proved to be a versatile one, and was produced or modified into a variety of other versions, including the EB-66, RB-66, and the WB-66. Likewise, many variants of the A-3 Skywarrior were produced. 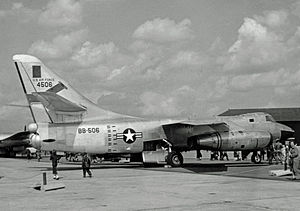 Deliveries to the USAF began in 1956, with 145 of this model produced. RB-66s were used as the major night photo-reconnaissance aircraft of the USAF during this time, many examples serving with tactical reconnaissance squadrons based in the United Kingdom and in West Germany. A total of 72 of the B-66B bomber version were built, 69 fewer than originally planned. A total of 13 B-66B aircraft later were modified into EB-66B electronic countermeasures aircraft for the cold war with Russia, and were stationed at RAF Chelveston with the 42 Tac Recon Sqdn who did the conversion in the early 1960s. They would rotate out of an alert pad in Spain during the time that the 42nd had them. These and the RB-66Cs that the 42nd had would eventually be sent to Vietnam. Unlike the U.S. Navy's A-3 Skywarrior, which performed some bombing missions, the Destroyer was not used as a bomber in Vietnam.

The RB-66C was a specialized electronic reconnaissance and Electronic Counter Measure (ECM) aircraft with an expanded crew of seven, including the additional electronics warfare experts. A total of 36 of these aircraft were built with the additional crew members housed in what was the camera/bomb bay of other variants. RB-66C aircraft had distinctive wingtip pods and were used in the vicinity of Cuba during the Cuban Missile Crisis and later over Vietnam. In 1966, these planes were renamed into EB-66C.

Unarmed EB-66B, EB-66C and EB-66E aircraft flew numerous missions during the Vietnam War. They not only helped to gather electronic intelligence about the North Vietnamese defenses, but also provided protection for the daily bombing missions of the F-105s by jamming North Vietnamese radar systems. Early on, B-66s flew oval "racetrack" patterns over North Vietnam, but after one of the aircraft was shot down by a MiG, the vulnerable B-66 flights were ordered back, just outside North Vietnam.

On 10 March 1964, a 19th TRS RB-66C flying on a photo-reconnaissance mission from the Toul-Rosières Air Base in France, was shot down over East Germany by a Soviet MiG-21 after it had crossed over the border due to a compass malfunction. The crew ejected and were taken prisoner briefly before being repatriated.

The final Douglas B-66 variant was the WB-66D weather reconnaissance aircraft, 36 of which were constructed.

The EB-66C/E was removed from USAF service by 1975 and most examples either scrapped in place or placed in storage for eventual scrapping. 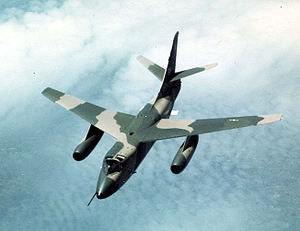 The Northrop X-21 was a modified WB-66D with an experimental wing, designed to conduct laminar flow control studies. Laminar-flow control was thought to potentially reduce drag by as much as 25%. Control would be by removal of a small amount of the boundary-layer air by suction through porous materials, multiple narrow surface slots, or small perforations. Northrop began flight research in April 1963 at Edwards Air Force Base, but with all of the problems encountered, and money going into the war, the X-21 would be the last experiment involving this concept.[3] 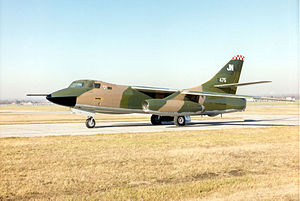 The shooting down of an EB-66 over North Vietnam and the subsequent rescue of one of its crew became the subject for the book Bat*21 by William Charles Anderson, and later a film version (1988) starring Gene Hackman and Danny Glover.