The C-124 was the primary heavy-lift transport for United States Air Force Military Air Transport Service (MATS) during the 1950s and early 1960s, until the Lockheed C-141 Starlifter entered service. It served in MATS-gained, later Military Airlift Command (MAC)-gained, units of the Air Force Reserve and Air National Guard until 1974.

Douglas Aircraft developed the C-124 from 1947 to 1949, from a prototype they created from a World War II–design Douglas C-74 Globemaster, and based on lessons learned during the Berlin Airlift. The aircraft was powered by four large Pratt & Whitney R-4360 piston engines producing 3,800 hp (2,800 kW) each. The C-124's design featured two large clamshell doors and a hydraulically actuated ramp in the nose as well as a cargo elevator under the aft fuselage. The C-124 was capable of carrying 68,500 lb (31,100 kg) of cargo, and the 77 ft (23 m) cargo bay featured two overhead hoists, each capable of lifting 8,000 lb (3,600 kg). As a cargo hauler, it could carry tanks, guns, trucks and other heavy equipment, while in its passenger-carrying role it could carry 200 fully equipped troops on its double decks or 127 litter patients and their attendants. It was the only aircraft of its time capable of transporting heavy equipment such as tanks and bulldozers without disassembly.

The C-124 first flew on 27 November 1949, with the C-124A being delivered from May 1950.[1] The C-124C was next, featuring more powerful engines, and an APS-42 weather radar fitted in a "thimble"-like structure on the nose. Wingtip-mounted combustion heaters were added to heat the cabin, and enable wing and tail surface deicing. The C-124As were later equipped with these improvements. 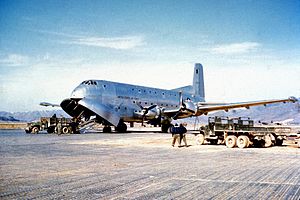 An early C-124A during the Korean War.

First deliveries of the 448 production aircraft began in May 1950 and continued until 1955. The C-124 was operational during the Korean War, and was also used to assist supply operations for Operation Deep Freeze in Antarctica. They performed heavy lift cargo operations for the US military worldwide, including flights to Southeast Asia, Africa and elsewhere. From 1959 to 1961 they transported Thor missiles across the Atlantic to England. The C-124 was also used extensively during the Vietnam War transporting materiel from the U.S. to Vietnam. Until the C-5A became operational, the C-124, and its sister C-133 Cargomaster were the only aircraft available that could transport very large loads.

The United States Air Force's Strategic Air Command (SAC) was the initial operator of the C-124 Globemaster, with 50 in service from 1950 through 1962. Four squadrons operated the type, consisting of the 1st, 2nd, 3rd and 4th Strategic Support Squadrons. Their primary duty was to transport nuclear weapons between air bases and to provide airlift of SAC personnel and equipment during exercises and overseas deployments.

The Military Air Transport Service (MATS) was the primary operator until January 1966, when the organization was retitled Military Airlift Command (MAC). Within a few years following the formation of MAC, the last remaining examples of the C-124 were transferred to the Air Force Reserve (AFRES) and the Air National Guard (ANG), said transfers being complete by 1970. The first ANG unit to receive the C-124C, the 165th Tactical Airlift Group (now known as the 165th Airlift Wing) of the Georgia Air National Guard, was the last Air Force unit to retire their aircraft (AF Serial No. 52-1066 and 53-0044) in September 1974.[5] 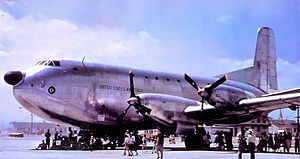 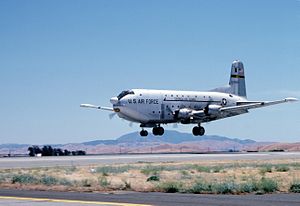 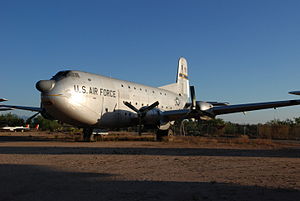 Data from McDonnell Douglas Aircraft since 1920[22]