The Douglas DC-4 is a four-engine (piston) propeller-driven airliner developed by the Douglas Aircraft Company. It served during World War II, in the Berlin Airlift and into the 1960s in a military role. From 1945, many civil airlines operated it worldwide.

After the DC-4E proved to be complicated to maintain and uneconomical, Douglas responded to the Eastern and United requests for a smaller and simpler replacement. Before the definitive DC-4 could enter service, the outbreak of World War II caused production to be channeled to the United States Army Air Forces whose aircraft were designated C-54 Skymaster, with US Navy aircraft designated Douglas R5D. The first, a C-54, flew from Clover Field in Santa Monica, California on 14 February 1942.

The DC-4's tricycle landing gear allowed its fuselage to have a constant cross-section for most of its length[citation needed], so it could easily be stretched into the later DC-6 and DC-7. 1,163 C-54/R5Ds were built for the United States military between 1942 and January 1946; 79 DC-4s were built postwar.

The DC-4/C-54 proved a popular and reliable type, 1245 being built between May 1942 and August 1947, including 79 postwar DC-4s. Several remain in service as of 2014. One current operator is Buffalo Airways of Yellowknife, Northwest Territories.[3]

Douglas continued to develop the type during the war in preparation for a return to airline use when peace returned. The type's sales prospects were affected when 500 wartime ex military C-54s and R5Ds came onto the civil market, many being converted to DC-4 standard by Douglas. DC-4s were a favorite of charter airlines such as Great Lakes Airlines, North American Airlines, Universal Airlines and Transocean Airlines. In the 1950s Transocean (Oakland, California) was the largest civil C-54/DC-4 operator. 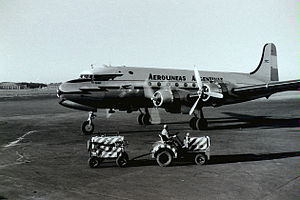 Douglas produced 79 new-build DC-4s between January 1946 and August 9, 1947, the last example being delivered to South African Airways. Pressurization was an option, but all civil DC-4s (and C-54s) were built un-pressurized. 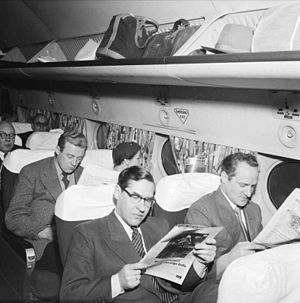 Cabin of a Scandinavian Airlines System DC-4 during a domestic evening service in Norway in 1953
Main article: List of Douglas DC-4 variants

The DC-4 featured extensively in the 1954 John Wayne motion picture The High and the Mighty.

A DC-4 appears as the "Amalgamated" airliner that must be piloted by stewardess Doris Day in the 1956 thriller Julie. 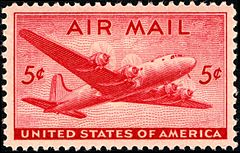 The Douglas DC-4 Skymaster is depicted on this 1946 U.S. Airmail stamp. The DC-4 was used extensively for airmail service.

A DC-4 painted in the KLM "Flying Dutchman" scheme of the Dutch Dakota Association, Lelystad, Holland

Very few DC-4s remain in service today.[6] The last two passenger DC-4s operating worldwide are based in Johannesburg, South Africa. They fly with old South African Airways (SAA) colors. They are ZS-AUB "Outeniqua" and ZS-BMH "Lebombo" and are owned by the South African Airways Museum Society[7][8] and operated by Skyclass Aviation,[9] a company specializing in classic and VIP charters to exotic destinations in Africa. A 1944 built DC-4 is currently being restored in New South Wales, Australia.[10] Buffalo Airways in Canada operates roughly a dozen DC-4s (former C-54s of various versions) 4 for hauling cargo and 3 for aerial firefighting.[11] A 1945 built DC-4 (C-54E) c/n 27370 is currently operating as a flying museum to the Berlin Airlift. Called the "Spirit of Freedom", it has been touring the world for nearly 20 years.[12] 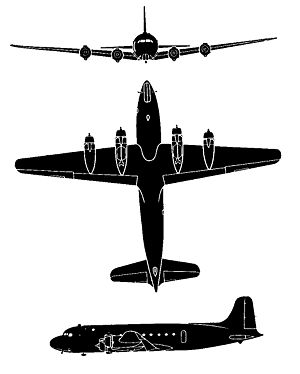