The Douglas DC-6 is a piston-powered airliner and transport aircraft built by the Douglas Aircraft Company from 1946 to 1958. Originally intended as a military transport near the end of World War II, it was reworked after the war to compete with the Lockheed Constellation in the long-range commercial transport market. More than 700 were built and many still fly today in cargo, military, and wildfire control roles.

The United States Army Air Forces commissioned the DC-6 project as the XC-112 in 1944. The Army Air Forces wanted a lengthened, pressurized version of the DC-4-based C-54 Skymaster transport with more powerful engines. By the time the prototype XC-112A flew on 15 February 1946 the war was over, the USAAF had rescinded its requirement, and the aircraft was converted to YC-112A, being sold in 1955.[1]

Douglas Aircraft modified the design into a civil transport 80 in (200 cm) longer than the DC-4. The civil DC-6 first flew on 29 June 1946, being retained by Douglas for testing. The first airline deliveries were to American Airlines and United Airlines on 24 November 1946.[1] A series of inflight fires (including the fatal crash of United Airlines Flight 608) grounded the DC-6 fleet in 1947. The cause was found to be a fuel vent next to the cabin cooling turbine intake; all DC-6s were modified and the fleet was flying again after four months on the ground.

File:Douglas DC 6 , SAS , SE-BDC , Kodachrome by Chalmers Butterfield.jpg
Passengers alighting from an SAS DC-6: Note the upper row of windows, indicating this was built as the optional sleeper variant of the original-length DC-6 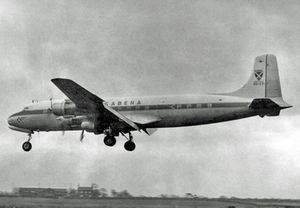 Sabena DC-6B arriving at Manchester in 1955 after a nonstop scheduled passenger flight from New York
File:1946-02-21 New Airliner.ogv
Universal newsreel about the DC-6

In April 1949, United, American, Delta, National, and Braniff were flying DC-6s in the United States. United flew them to Hawaii, Braniff flew them to Rio de Janeiro, and Panagra flew Miami-Buenos Aires; KLM, SAS, and Sabena flew DC-6s across the Atlantic. BCPA DC-6s flew Sydney to Vancouver, and Philippine flew Manila to London and Manila to San Francisco.

Pan Am used DC-6Bs to start transatlantic tourist-class flights in 1952. These were the first DC-6Bs that could gross 107,000 lb (49,000 kg), with CB-17 engines rated at 2,500 hp (1,900 kW) on 108/135 octane fuel. Several European airlines followed with their own transatlantic services. The DC-6A/B/C subtypes could perhaps fly nonstop from the eastern US to Europe, but needed to refuel in Newfoundland (and perhaps elsewhere[where?]) when flying westbound (into the wind).

Douglas designed four variants of the DC-6: the basic DC-6, and the longer-fuselage (60 in (150 cm)) higher-gross-weight, longer-range versions—the DC-6A with cargo doors forward and aft of the wing on the left side, with a cargo floor; the DC-6B for passenger work, with passenger doors only and a lighter floor; and the DC-6C convertible, with the two cargo doors and removable passenger seats.

The DC-6B, originally powered by Double Wasp engines with Hamilton Standard 43E60 constant-speed reversing propellers, was regarded as the ultimate piston-engine airliner from the standpoint of ruggedness, reliability, economical operation, and handling qualities.[2]

The military version, similar to the DC-6A, was the USAF C-118 Liftmaster; the USN R6D version used the more powerful R-2800-CB-17 engines. These were later used on the commercial DC-6B to allow international flights.[3] The R6D Navy version (in the late 1950s and early 1960s) had Curtiss Electric constant-speed reversing propellers.[citation needed]

The USAF and USN renewed their interest in the DC-6 during the Korean War, and ordered 167 C-118/R6D aircraft, some of which later found their way to civil airlines. Harry Truman's first presidential aircraft was an Air Force short-fuselage DC-6 which was designated VC-118, and named "The Independence". It is preserved in the National Museum of the United States Air Force at Dayton, Ohio.

Total production of the DC-6 series was 704, including military versions.[4]

In the 1960s two DC-6s were used as transmitter platforms for educational television, based at Purdue University, in a program called the Midwest Program on Airborne Television Instruction.[5] 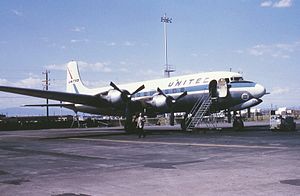 DC-6A
Freighter variant; fuselage slightly lengthened from DC-6; fitted with cargo door; some retained cabin windows, others had windows deleted. Originally called "Liftmaster" as USAF models. The rear cargo door came standard with a built in 4,000 lb (1,800 kg) lift elevator and a Jeep. The Jeep was a public relations stunt and shortly after, dropped.[8]
DC-6B
All-passenger variant of DC-6A, without cargo door. 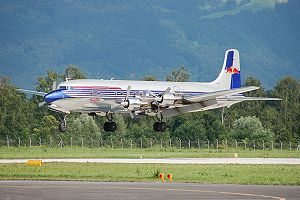 Today, most DC-6s are inactive, stored, or preserved in museums. A number are still flying in northern bush operations in Alaska and Canada, while several are based in Europe and a few are still in operation for small carriers in South America.

A great number of airlines and air forces from several countries included the DC-6 in their fleets at some point in time; these are further detailed in the list of Douglas DC-6 operators.