From Infogalactic: the planetary knowledge core
Jump to: navigation, search
For the author of the same name, see Douglas Hyde (author).

Douglas Hyde (Irish: Dubhghlas de hÍde; 17 January 1860 – 12 July 1949), known as An Craoibhín Aoibhinn (lit. "The Pleasant Little Branch"), was an Irish scholar of the Irish language who served as the first President of Ireland from 1938 to 1945. He was a leading figure in the Gaelic revival, and first president of the Gaelic League, one of the most influential cultural organisations in Ireland at the time.

Hyde was born at Longford House in Castlerea in County Roscommon, while his mother, Elizabeth née Oldfield (1834–1886) was on a short visit there. His father, Arthur Hyde, whose family were originally from Castlehyde, Fermoy, County Cork, was Church of Ireland rector of Kilmactranny, County Sligo from 1852 to 1867, and it was here that Hyde spent his early years. Arthur Hyde and Elizabeth Oldfield married in County Roscommon in 1852 and had three other children, Arthur (1853–79 in County Leitrim), John Oldfield (1854–96 in County Dublin), and Hugh (1856) Hyde.[1] In 1867, his father was appointed prebendary and rector of Tibohine, and the family moved to neighbouring Frenchpark, in County Roscommon. He was home schooled by his father and his aunt due to a childhood illness.[2] While a young man, he became fascinated with hearing the old people in the locality speak the Irish language. He was influenced in particular by the gamekeeper Seamus Hart and the wife of his friend, Mrs. Connolly. He was crushed when Hart died (Douglas was 14) and his interest in the Irish language, which was the first language he began to study in any detail, as his own undertaking, flagged for a while. However, he visited Dublin a number of times and realised that there were groups of people, just like him, interested in Irish, a language looked down on at the time by many and seen as backward and old-fashioned.

Rejecting family pressure that, like past generations of Hydes, he would follow a career in the Church, Hyde instead became an academic. He entered Trinity College, Dublin, where he became fluent in French, Latin, German, Greek and Hebrew. A medallist of the College Historical Society, he was elected its president in 1931.[3] His passion for Irish, already a language in severe decline, led him to help found the Gaelic League, or in Irish, Conradh na Gaeilge, in the hope of saving it from extinction.

Hyde married Lucy Kurtz, an Englishwoman, in 1893 and had two daughters, Nuala and Úna.

Hyde joined the Society for the Preservation of the Irish Language around 1880, and between 1879 and 1884 he published more than a hundred pieces of Irish verse under the pen name "An Craoibhín Aoibhinn" ("The Pleasant Little Branch").[4] The Irish language movement, initially seen as eccentric, gained a mass following throughout the island. Hyde helped establish the Gaelic Journal in 1892, and in November of the same year wrote a manifesto called The necessity for de-anglicising the Irish nation,[4] arguing that Ireland should follow her own traditions in language, literature and even in dress.

In 1893 he helped found the Gaelic League. It was set up to encourage the preservation of Irish culture, its music, dances, and language. Many of the new generation of Irish leaders who played a central role in the fight for Irish independence in the early twentieth century, including Patrick Pearse, Éamon de Valera (who married his Irish teacher Sinéad Ní Fhlannagáin), Michael Collins, and Ernest Blythe first became politicised and passionate about Irish independence through their involvement in Conradh na Gaeilge (Gaelic League). He filled out the 1911 census form in Irish.[5]

Hyde himself, however, felt uncomfortable at the growing politicisation of his movement (which had been infiltrated by the Irish Republican Brotherhood, just like the Irish Volunteers and the Gaelic Athletic Association) and resigned the presidency in 1915; he was replaced reluctantly by co-founder Eoin MacNeill.[6]

Hyde had no association with Sinn Féin and the Independence movement. He was elected to Seanad Éireann, the upper house of the Irish Free State's Oireachtas, at a by-election on 4 February 1925, replacing Sir Hutcheson Poë.[7]

However, his tenure ended at the 1925 Seanad election. With 19 seats available in one statewide constituency, Hyde finished 28th of the 78 candidates. The Catholic Truth Society opposed him based on his supposed support for divorce (in fact he was anti-divorce) and his Protestantism; however, Donal O'Sullivan felt the CTS campaign was ineffective,[8] and both he and John Coakley note that Irish-language advocates did especially badly at the election, with all those endorsed by the Gaelic League losing.[8][9]

He returned to academia, as Professor of Irish at University College Dublin, where one of his students was future Attorney General and President of Ireland Cearbhall Ó Dálaigh.

File:CBI - SERIES C - FIFTY POUND NOTE.PNG
Hyde is notable in that he was the only leader of independent Ireland to be featured on its banknotes, here on a Series C Banknote of IR£50.

In April 1938, by now retired from academia, Douglas was plucked from retirement by Taoiseach Éamon de Valera and again appointed to Seanad Éireann. Again his tenure proved short, even shorter than before. But this time it was because, on the suggestion of Fine Gael, Hyde was chosen after inter-party negotiations as the first President of Ireland, to which he was elected unopposed. He was selected for a number of reasons: 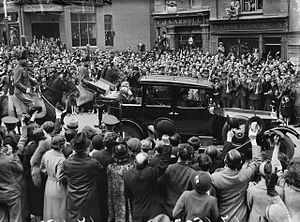 Douglas Hyde (in back of car holding top hat), leaving Dublin Castle with a cavalry escort following his inauguration.

Hyde was inaugurated as the first President of Ireland on 26 June 1938, in the first inaugural ceremony in the nation's history.

Hyde set a precedent of reciting the Presidential Declaration of Office in Irish (though the president is technically permitted to choose English). His recitation, in his native Roscommon Irish dialect, remains one of the few recordings of a dialect that has long disappeared and of which Hyde himself was one of the last speakers.

Upon inauguration, he moved into the long vacant Viceregal Lodge in Phoenix Park, since known as Áras an Uachtaráin.

Despite being placed in a position to shape the office of the presidency via precedent, Hyde by and large opted for a quiet, conservative interpretation of the office. His age and (after a paralysing stroke in April 1940) deteriorating health obligated him to schedule periods of rest throughout his days, and his lack of political experience caused him to defer to his advisers on questions of policy and discretionary powers, especially to his Secretary, Michael McDunphy.

On 13 November 1938, just months after Hyde's inauguration, Hyde attended an international soccer match between Ireland and Poland at Dalymount Park in Dublin. This was seen as breaching the GAA's ban on 'foreign games' and he was subsequently removed as patron of the GAA, an honour he had held since 1902.[11]

However, in April 1940 he suffered a massive stroke. Plans were made for his lying-in-state and state funeral, but to the surprise of everyone he survived, albeit paralysed and having to use a wheelchair.

Although the role of President of Ireland was, and is, largely ceremonial, Hyde did have a small number of important decisions to make during his presidency. He was confronted with a crisis in 1944 when de Valera's government unexpectedly collapsed in a vote on the Transport Bill and the President had to decide whether or not to grant an election to de Valera.[12] (He granted the election.) President Hyde also twice used his power under Article 26 of the Constitution, having consulted the Council of State, to refer a Bill or part of a Bill to the Supreme Court, for the court's decision on whether the Bill or part referred is repugnant to the Constitution (so that the Bill in question cannot be signed into law). On the first occasion, the court held that the Bill referred – Offences Against the State (Amendment) Bill, 1940 – was not repugnant to the Constitution.[13] In response to the second reference, the Court decided that the particular provision referred – section 4 of the School Attendance Bill, 1942 – was repugnant to the Constitution.[14] Because of Article 34.3.3° of the Constitution, the constitutional validity of the Offences Against the State (Amendment) Act, 1940[15] cannot be challenged in any court, since the Bill which became that Act was found by the Supreme Court not to be repugnant in the context of an Article 26 reference.

One of Hyde's last presidential acts was a visit to the German ambassador Eduard Hempel on 3 May 1945 to offer his condolences on the death of Adolf Hitler. The visit remained a secret until 2005.[16]

Hyde left office on 25 June 1945, opting not to nominate himself for a second term. Due to his ill-health he did not return to his Roscommon home Ratra, which had lain empty since the death of his wife early in his term. Instead he was moved into the former Secretary to the Lord Lieutenant's residence in the grounds of Áras an Uachtaráin, which he renamed Little Ratra and where he lived out the remaining four years of his life. He died at 10pm on 12 July 1949, aged 89. 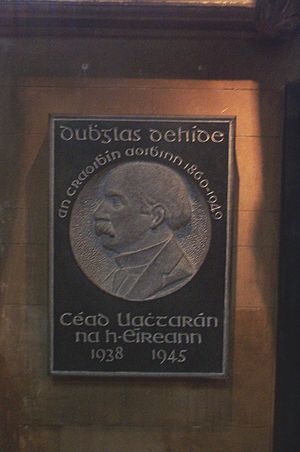 As a former President of Ireland he was accorded a state funeral. A problem arose; as a member of the Church of Ireland his funeral service took place in Dublin's Church of Ireland St. Patrick's Cathedral. However, contemporary rules of the Roman Catholic Church in Ireland prohibited Roman Catholics from attending services in non-Catholic churches. As a result, all but one member of the Catholic cabinet, Noël Browne, remained outside the cathedral grounds while Hyde's funeral took place. They then joined the cortège when his coffin left the cathedral. Éamon de Valera, by now Leader of the Opposition also did not attend, being represented by a senior Fianna Fáil figure who was a member of the Church of Ireland, Erskine H. Childers, a future President of Ireland himself. Hyde was buried in Frenchpark, County Roscommon at Portahard Church, (where he had spent most of his childhood life) beside his wife Lucy, his daughter Nuala, his sister Annette, mother Elizabeth and father Arthur.