Lawrence Douglas Wilder (born January 17, 1931) is an American politician, who served as the second African American to be elected as governor of Virginia and first African-American governor of any state since Reconstruction.[1] Wilder served as the 66th Governor of Virginia from 1990 to 1994. When earlier elected as Lieutenant Governor, he was the first African American elected to statewide office in Virginia. His most recent political office was Mayor of Richmond, Virginia, which he held from 2005 to 2009.

Wilder was born on January 17, 1931 in the segregated Church Hill neighborhood of Richmond.[2] He is the son of Beulah Olive (Richards) and Robert Judson Wilder,[3] and is the grandson of slaves, his paternal grandparents having been enslaved in Goochland County.[4] The seventh of eight brothers and sisters, Wilder was named for the African American writers Paul Laurence Dunbar and Frederick Douglass.[5]

Wilder’s father sold insurance, his mother worked as a maid, and while never completely destitute, Wilder recalled his early years during the Great Depression as a childhood of "gentle poverty."[6]

Wilder worked his way through Virginia Union University by waiting tables at hotels and shining shoes, graduating in 1951 with a degree in chemistry.[7] Drafted into the United States Army during the Korean War, he volunteered for combat duty. At the Battle of Pork Chop Hill, he and two other men found themselves cut off from their unit, but they bluffed nineteen Chinese soldiers into surrendering, for which Wilder was awarded the Bronze Star Medal. He was a Sergeant at the time of his discharge in 1953.[8]

Following the war, Wilder worked in the state medical examiner's office and pursued a master's degree in chemistry. In 1956 he changed his career plans and entered Howard University Law School. After graduating in 1959 he established a law practice in Richmond.[9]

Douglas Wilder began his career in public office by winning a 1969 special election for the Virginia State Senate from a Richmond-area district. He was the first African American elected to the Virginia Senate since Reconstruction. A 1970 redistricting gave Wilder a predominantly African-American district, and as a liberal in a conservative legislature, he worked hard and gained influence through committee chairmanships as he accrued seniority.[citation needed]

In 1985 Wilder was narrowly elected the 35th Lieutenant Governor of Virginia on a Democratic ticket headed by Attorney General Gerald L. Baliles, the party's candidate for governor. Wilder was the first African American to win a statewide election in Virginia. Aware that he needed to reach the swath of the state's majority white electorate, Wilder had undertaken a two-month "back roads" campaign tour of the state, visiting Virginia's predominantly rural central and western regions and enhancing his name recognition across the state's demographic expanse.

Wilder was elected governor on November 8, 1989, defeating Republican Marshall Coleman by a spread of less than half a percent. The narrow victory margin prompted a recount, which reaffirmed Wilder's election. He was sworn in on January 13, 1990 by former U.S. Supreme Court Justice Lewis F. Powell, Jr.. In recognition of his landmark achievement as the first African American elected governor in the nation, the NAACP awarded Wilder the Spingarn Medal for 1990.

Wilder had a comfortable lead in the last polls before the election. The unexpected closeness of the election may have been due to the Republicans' strong "get out the vote" efforts. Wilder had been candid about his "pro-choice" position in relation to abortion. Some observers believed the close election was due to what is known as the "Bradley effect"; they suggested that white voters were more likely to tell pollsters that they would support non-white candidates in given contests than to actually cast their votes for them.

During his tenure as governor, Wilder worked on crime and gun control initiatives. He also worked to fund Virginia's transportation initiatives, effectively lobbying Congress to reallocate highway monies to those states with the greatest needs.[11] Much residential and office development had taken place in Northern Virginia without the state's receiving sufficient federal money for infrastructure improvements to keep up. He also succeeded in passing state bond issues to support improving transportation. In May 1990 Wilder ordered state agencies and universities to divest themselves of any investments in South Africa because of its then policy of apartheid, making Virginia the first Southern state to take such action.

During his term, Wilder carried out Virginia's law on capital punishment: 14 executions by the electric chair, including the controversial case of Roger Keith Coleman.

During his term, Wilder had strained relations with United States Senator and former Governor Charles Robb that many papers described as a "feud."[12][13]

Wilder left office in 1994 because of Virginia's prohibition of successive gubernatorial terms. The next governor elected was Republican George Allen. 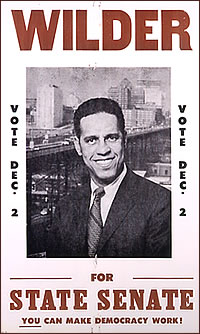 Poster of Wilder campaigning for the State Senate in 1969

Since the 1970s Wilder has supported the death penalty. He generally ran on "anti-crime" platforms. In response to a waning budget balance due to state economic problems, Wilder supported some of the most dramatic cuts in the United States in allocations for higher education.

In the mid-1990s Wilder was scrutinized for his attacks on fellow Democrat Chuck Robb and support of Republican Mark Earley. Wilder declared himself a candidate for President in 1992, but withdrew before primary season had ended. He briefly ran for the U.S. Senate as an independent in 1994.

On May 30, 2004, Wilder announced his intention to run for Mayor of Richmond. Until recently, the Richmond City Council chose the mayor from among its 9 members. The move to change this policy succeeded in November 2003 when voters approved a mayor-at-large referendum, with roughly 80 percent voting in favor of the measure. Wilder was a leading proponent of the mayor-at-large proposal.

On November 2, 2004, Wilder received 79% of the vote (55,319 votes) to become the first directly elected Mayor of Richmond in sixty years. Upon winning the election, Wilder communicated his intentions to take on corruption in the city government. He issued several ultimatums to the sitting City Council before he took office. He was sworn in on January 2, 2005.

He was a member of the Mayors Against Illegal Guns Coalition,[14] a bi-partisan group with a stated goal of "making the public safer by getting illegal guns off the streets." The Coalition was co-chaired by former Boston Mayor Thomas Menino and former New York City Mayor Michael Bloomberg.

On May 16, 2008 Wilder announced that he would not seek reelection to another four-year term as mayor.

Wilder has continued as an adjunct professor in public policy at Virginia Commonwealth University. He writes occasional editorials for Virginia newspapers.

Douglas Wilder is the founder of the United States National Slavery Museum, a non-profit organization based in Fredericksburg, Virginia. The museum has been fundraising and campaigning since 2001 to establish a national museum on slavery in America. In June 2008 Wilder requested that the museum be granted tax exempt status, which was denied.[15] From that time, taxes on the land had not been paid and the property was at risk of being sold at auction by the city of Fredericksburg.[16]

Beset by financial problems the museum has been assessed delinquent property taxes for the years 2009, 2010, and 2011 amounting to just over $215,000.[17] The organization filed for Chapter 11 Bankruptcy protection on September 22, 2011. Early in 2011 Douglas Wilder was refusing to respond to or answer any questions from either news reporters or patrons who had donated artifacts.[18]

Wilder made news in 2012 when he refused to support Barack Obama, the nation's first black president, for another term.[19] He noted that he supported Obama in 2008, but said the president's tenure in the Oval Office thus far had been a disappointment. Wilder did not endorse Mitt Romney, the Republican challenger, and later said that he hoped for an Obama victory despite having gone to a Romney fundraiser.[19]

In 2015, Wilder published an autobiography called Son of Virginia: A Life in America's Political Arena.[20]