Downtown Vancouver is the southeastern portion of the peninsula in the north-central part of the City of Vancouver. It is the business, commercial, cultural, financial, government, and entertainment centre of the city and the Metro Vancouver and Lower Mainland regions.

The downtown area is generally considered to be bounded by Burrard Inlet to the north, Stanley Park and the West End to the west, False Creek to the south, and the Downtown Eastside to the east. Most sources include the full downtown peninsula (adding the West End neighbourhood and Stanley Park) as downtown Vancouver, but the City of Vancouver defines them as separate neighbourhoods.

Besides the readily identifiable office towers of the financial and central business districts, Downtown Vancouver also includes residential neighbourhoods in the form of high-rise apartment and condominiums, in Yaletown and Coal Harbour. Other downtown neighbourhoods include the Granville Mall and Entertainment District, Downtown's South, Gastown, Japantown, and Chinatown. 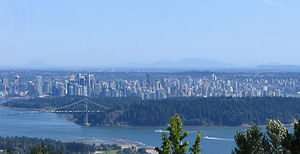 Downtown Vancouver, with the West End and Stanley Park.

The downtown area includes most of the remaining historic buildings and many of the larger notable buildings in the region.

The presence of water on three sides limits access to downtown Vancouver. There are four major bridges: the Lions Gate Bridge, connecting to the North Shore municipalities and the Trans Canada Highway, the Burrard Street Bridge, Cambie Street Bridge, and Granville Street Bridge provides access to the commercial and residential areas south of False Creek.

The bus rapid transit line 98 B-Line had eight stops in the downtown core, primarily along Seymour Street and Burrard Street. This service was replaced on August 17, 2009 by SkyTrain's Canada Line.

The city is planning to extend the downtown streetcar from its current route of Granville Island to the Main Street SkyTrain station, with future plans extending it to Chinatown and then to Stanley Park.