From Infogalactic: the planetary knowledge core
Jump to: navigation, search
For other uses of the term "heavy horse", see Heavy horse. For "Draft" the Australian sport, see Campdrafting. 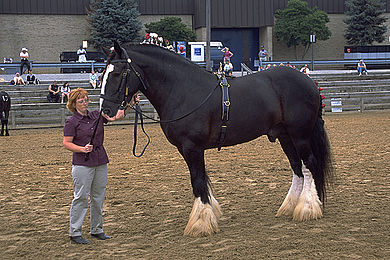 A draft horse (US), draught horse (UK and Commonwealth) or dray horse (from the Old English dragan meaning "to draw or haul"; compare Dutch dragen and German tragen meaning "to carry"), less often called a carthorse, work horse or heavy horse, is a large horse bred to be a working animal doing hard tasks such as plowing and other farm labor. There are a number of breeds, with varying characteristics, but all share common traits of strength, patience, and a docile temperament which made them indispensable to generations of pre-industrial farmers.

Draft horses and draft crossbreds are versatile breeds used today for a multitude of purposes, including farming, draft horse showing, logging, recreation, and other uses. They are also commonly used for crossbreeding, especially to light riding breeds such as the Thoroughbred, for the purpose of creating sport horses. While most draft horses are used for driving, they can be ridden and some of the lighter draft breeds are capable performers under saddle. 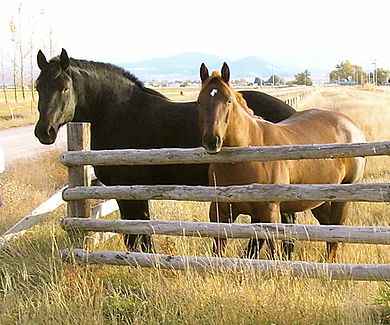 Draft horses are recognizable by their tall stature and extremely muscular build. In general, they tend to have a more upright shoulder, producing more upright movement and conformation that is well-suited for pulling. They tend to have broad, short backs with powerful hindquarters, again best suited for the purpose of pulling. Additionally, the draft breeds usually have heavy bone, and a good deal of feathering on their lower legs. Many have a straight profile or "Roman nose" (a convex profile). Draft breeds range from approximately 16 to 19 hands high and from 1,400 to 2,000 lb (640 to 910 kg).

Draft horses crossbred on light riding horses adds height and weight to the ensuing offspring, and may increase the power and "scope" of the animal's movement.

Humans domesticated horses and needed them to perform a variety of duties. One type of horse-powered work was the hauling of heavy loads, plowing fields, and other tasks that required pulling ability. A heavy, calm, patient, well-muscled animal was desired for this work. Conversely, a light, more energetic horse was needed for riding and rapid transport. Thus, to the extent possible, a certain amount of selective breeding was used to develop different types of horse for different types of work. 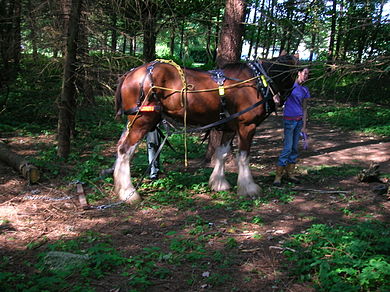 Extracting logs with a Clydesdale at Eglinton Country Park in Scotland.

It is a common misunderstanding that the Destrier that carried the armoured knight of the Middle Ages had the size and conformation of a modern draft horse, and some of these Medieval war horses may have provided some bloodlines for some of the modern draft breeds. The reality was that the high-spirited, quick-moving Destrier was closer to the size, build, and temperament of a modern Andalusian or Friesian. There also were working farm horses of more phlegmatic temperaments used for pulling military wagons or performing ordinary farm work also provided bloodlines of the modern draft horse. Records indicate that even medieval drafts were not as large as those today. Of the modern draft breeds, the Percheron probably has the closest ties to the medieval war horse.[3] 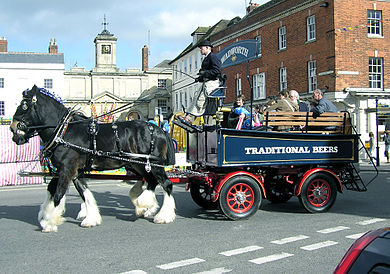 These Shire horses are used to pull a brewery dray delivering beer to pubs in England. In this picture, members of the public are being given a ride.

By the 19th century, horses weighing more than 1600 pounds that also moved at a quick pace were in demand. Tall stature, muscular backs, and powerful hindquarters made the draft horse a source of “horsepower” for farming, hauling freight and moving passengers, particularly before railroads came on the scene. Even in the 20th century, draft horses were used for practical work, including over half a million used during World War I to support the military effort.

In the late 19th century and early 20th century, thousands of draft horses were imported from Western Europe into the United States. Percherons came from France, Belgians from Belgium, Shires from England, Clydesdales from Scotland. Many American draft registries were founded in the late 19th century. The Percheron, with 40,000 broodmares registered as of 1915, was America’s most numerous draft breed at the turn of the 20th century.[3] A breed developed exclusively in the U.S. was the American Cream Draft, which had a stud book established by the 1930s. 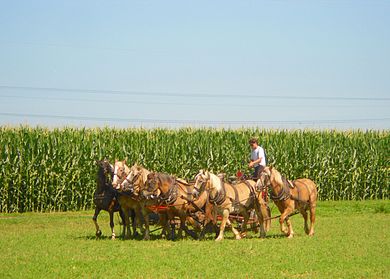 Beginning in the late 19th century, and with increasing mechanization in the 20th century, especially following World War I in the USA and after World War II in Europe, the popularity of the internal combustion engine, and particularly the tractor, reduced the need for the draft horse. Many were sold to slaughter for horsemeat and a number of breeds went into significant decline.

Today draft horses are most often seen at shows, pulling competition and entered in competitions called "heavy horse" trials, or as exhibition animals pulling large wagons. However, they are still seen on some smaller farms in the USA and Europe. They are particularly popular with groups such as Amish and Mennonite farmers, as well as those individuals who wish to farm with a renewable source of power. They are also sometime used during forestry management to remove logs from dense woodland where there is insufficient space for mechanized techniques. Crossbred draft horses also played a significant role in the development of a number of warmblood breeds, popular today in international FEI competition up to the Olympic Equestrian level.

Small areas still exist where draft horses are widely used as transportation, due to legislation preventing automotive traffic, such as on Mackinac Island in the United States.

Feeding, caring for and shoeing a one-ton draft horse is costly. The draft horse’s metabolism is often similar to that of ponies in that draft horses have lower needs per bodyweight than light horse breeds, but because of their size, most are fed a significant amount of feed and hay per day. A grain feeding of only 0.3% of body weight is all drafts need.[4] Drafts not subjected to extreme energy demands can do well on good quality grass. 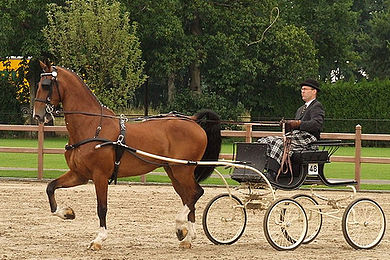 A number of horse breeds are used as draft horses, with the popularity of a given breed often closely linked to geographic location. In North America, the classic list of draft horse breeds was five: Belgian, Clydesdale, Percheron, Shire, and Suffolk. The Draft Cross Breeders and Owners Association recognizes 34 breeds as draft horses:[5]