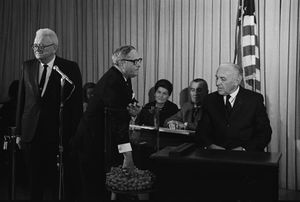 On December 1, 1969, the Selective Service System of the United States conducted two lotteries to determine the order of call to military service in the Vietnam War for men born from 1944 to 1950. These lotteries occurred during "the draft"—a period of conscription, controlled by the President, from just before World War II to 1973.

The lottery numbers assigned in December 1969 were used during calendar year 1970 both to call for induction and to call for physical examination, a preliminary call covering more men.

The days of the year (including February 29) were represented by the numbers 1 through 366 written on slips of paper. The slips were placed in separate plastic capsules that were mixed in a shoebox and then dumped into a deep glass jar. Capsules were drawn from the jar one at a time.

The first number drawn was 258 (September 14), so all registrants with that birthday were assigned lottery number 1. The second number drawn corresponded to April 24, and so forth. All men of draft age (born 1944 to 1950) who shared a birthdate would be called to serve at once. The first 195 birthdates drawn were later called to serve in the order they were drawn; the last of these was September 24.[1]

Also on December 1, 1969, a second lottery was held, with the 26 letters of the alphabet. Among men with the same birthdate, the order of induction was determined by the permutation ranks of the first letters of their last, first, and middle names.[2] Anyone with initials "JJJ" would have been first within the shared birthdate; anyone with initials "VVV" would have been last.[3] 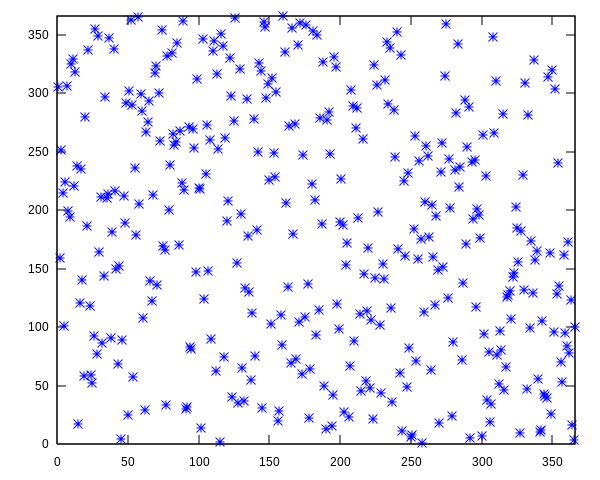 People soon noticed that the lottery numbers were not distributed uniformly over the year. In particular, November and December births, or dates 306 to 366, were assigned mainly to lower draft numbers representing earlier calls to serve (see figure). This led to complaints that the lottery was not random as the legislation required. Analysis of the procedure suggested that mixing 366 capsules in the shoe box did not mix them sufficiently before dumping them into the jar. ("The capsules were put in a box month by month, January through December, and subsequent mixing efforts were insufficient to overcome this sequencing.")[2] Only five days in December—Dec. 2, 12, 15, 17 and 19—were higher than the last call number of 195; were the days evenly distributed, 14 days in December would have been expected to remain uncalled. Additionally, the inclusion of a slip for February 29 made that date grossly over-represented, given that some of the birth years of prospective inductees were common years. However, the non-uniform lottery was allowed to stand.

In the late 1960s, President Nixon established a commission to recommend the best ways to raise military manpower, to keep the draft or to institute a volunteer army. After much debate within the Nixon administration and Congress, it was decided that an all-volunteer force was affordable, feasible, and would enhance the nation’s security.[4] U.S. President Richard Nixon issued an Executive order prescribing regulations for random selection of the United States Selective Service system on November 26, 1969.[5]

The 1970s were a time of turmoil in the United States, beginning with the Civil Rights Movement which set the standards for practices by the anti-war movement. The 1969 draft lottery only encouraged resentment of the Vietnam war and the draft. It strengthened the anti-war movement[verification needed] all over America as people decried discrimination by the draft system "against low-education, low-income, underprivileged members of society".[6]

The draft lottery had social and economic consequences because it generated resistance to military service and the resisters, draft evaders or "draft dodgers", were generally young, well educated, healthy men. Some chose the legal sanctions for refusing military service, such as imprisonment, either showing their disapproval by burning their draft cards or draft letters, or simply not presenting themselves for the military service test. Others left the country, commonly moving to Canada. The number of American citizens who moved to Canada during the Vietnam war because of the draft is estimated to be around 125,000; it is believed that about half returned to the United States after the Nixon era (when the war was also over).[citation needed]

Lottery procedure was improved next year although public discontent continued to grow[citation needed] until "authority to induct expired on June 30, 1973.".[3]

In 1970, covering 1951 birthdates for use during 1971 (sometimes called the 1971 draft), scientists at the National Bureau of Standards prepared 78 random permutations of the numbers 1 to 366 using random numbers selected from published tables.[7] From the 78 permutations, 25 were selected at random and transcribed to calendars using 1 = January 1, 2 = January 2, ... 365 = December 31. Those calendars were sealed in envelopes. 25 more permutations were selected and sealed in 25 more envelopes without transcription to calendars. The two sets of 25 envelopes were furnished to the Selective Service System.[7]

On June 2, an official picked two envelopes, thus one calendar and one raw permutation. The 365 birthdates (for 1951) were written down, placed in capsules, and put in a drum in the order dictated by the selected calendar. Similarly, the numbers from 1 to 365 were written down and placed into capsules in the order dictated by the raw permutation.[7]

On July 1, the drawing date, one drum was rotated for an hour and the other for a half-hour (its rotating mechanism failed).[7] Pairs of capsules were then drawn, one from each drum, one with a 1951 birthdate and one with a number 1 to 366. The first date and number drawn were September 16 and 139, so all men born September 16, 1951, were assigned draft number 139. The 11th draws were the date July 9 and the number 1, so men born July 9 were assigned draft number 1 and drafted first.[7]