From Infogalactic: the planetary knowledge core
Jump to: navigation, search
For other uses, see Dragnet (policing).

Dragnet is an American radio, television and motion picture series, enacting the cases of a dedicated Los Angeles police detective, Sergeant Joe Friday, and his partners. The show takes its name from the police term "dragnet", meaning a system of coordinated measures for apprehending criminals or suspects.

Dragnet is perhaps the most famous and influential police procedural drama in media history. The series gave audience members a feel for the boredom and drudgery, as well as the danger and heroism, of police work. Dragnet earned praise for improving the public opinion of police officers.[1]

Actor and producer Jack Webb's aims in Dragnet were for realism and unpretentious acting; he achieved both goals,[peacock term] and Dragnet remains a key influence on subsequent police dramas in many media.[citation needed]

The show's cultural impact is such that after five decades, elements of Dragnet are familiar to those who have never seen or heard the program: 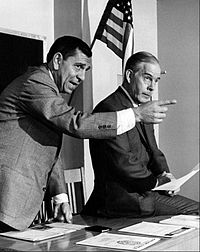 Webb relaunched Dragnet in 1966, with NBC once again chosen to air the series. He tried to persuade Ben Alexander to rejoin him as Frank Smith. Alexander was then committed to an ABC police series, Felony Squad, and the producers would not release him. Webb reluctantly came up with a new character to take the role of Joe Friday's partner, calling upon his longtime friend Harry Morgan to play Officer Bill Gannon. Morgan had previously portrayed rooming house proprietor "Luther Gage" in the 1949 radio series episode "James Vickers". George Fenneman returned as the show's primary announcer with John Stephenson replacing Hal Gibney in the role of announcing the trial dates and subsequent punishments for the offenders. Fenneman replaced Stephenson in that role during the fourth season. Unlike the previous Dragnet series, the revival was produced and aired in color.

Webb produced a TV movie pilot for the new version of the show for Universal Television, although the pilot was not aired until January 1969. NBC bought the show on the strength of the movie and it debuted as a mid-season replacement for the sitcom The Hero on Thursday nights in January 1967. To distinguish it from the original, the year was included in the title of the show (i.e., Dragnet 1967). Although Friday had been promoted to lieutenant in the final episode of the 1950s production, Webb chose to have Friday revert to sergeant with his familiar badge, "714".[2]

When real-life LAPD Sergeant Dan Cooke, Webb's contact in the department during production of the revived Dragnet series, was promoted to lieutenant, he arranged to carry the same lieutenant's badge, number 714, as worn by Joe Friday. Cooke was technical advisor to the KNBC documentary "Police Unit 2A-26", directed by John Orland. He brought that to the attention of Webb, who hired Orland to direct and film the "This is the City", a series of mini-documentaries about Los Angeles that preceded most TV episodes during the 1969 and 1970 seasons.[citation needed] The show enjoyed good ratings on NBC's schedule for four seasons, although its popularity did not exceed that of the 1950s version.

Much as was done 11 years earlier, Webb decided voluntarily to discontinue Dragnet after its fourth season to focus on producing and directing his other projects through Mark VII Limited. The first of these projects was a spinoff of Dragnet titled Adam-12, a thirty-minute police procedural like its parent series but focusing on patrol officers rather than detectives. The series premiered in the fall of 1968 and ran for seven seasons, coming to an end in 1975. Adam-12, in turn, spawned its own spinoff in early 1972 called Emergency!; running as a weekly series until 1977 and as a series of made-for-television movies for two years after that, Emergency! was centered around a fictitious Los Angeles County Fire Department paramedic rescue unit, Squad 51, the latter of which was a relatively new and different concept.

Reruns of this version were popular on local stations, usually during the late afternoons or early evenings, in the early 1970s. In the late 1980s, they found their way to Nick at Nite and, beginning in the late 1990s, to sister cable channel TV Land. From October 1, 2011 to April 26, 2013, the series ran daily on digital cable channel Antenna TV and before that, the show aired on Retro Television Network.

Dragnet currently airs Monday through Friday on Me-TV. The show is part of the "CriMe TV" morning block with Perry Mason and The Rockford Files, with Dragnet airing back to back from 11:00 am until 12:00 pm. In December 2014, Me-TV added a third airing of Dragnet to its late-night lineup; the series airs at 12:30 am following a second episode of Perry Mason. Me-TV ended the run of Dragnet on January 1, 2015, whereupon it became part of Cozi TV's regular lineup

All four seasons are available on DVD and for free on-demand streaming on Hulu.com and Netflix (until Summer 2015) for US residents.[citation needed]

Webb had begun working on a revival of Dragnet in 1982, writing and producing five scripts and keeping his role as Joe Friday. Once again he would need to create a new character for Friday's partner; Ben Alexander had died in 1969 and Harry Morgan was tied up with his commitments to M*A*S*H and its already greenlit followup AfterMASH. Webb decided on Kent McCord, the former Adam-12 star who had several guest appearances early in the 1967 revival series, to fill the undefined role; there was no indication if McCord would be playing a totally new character or his Jim Reed character from Adam-12. Webb died suddenly from a heart attack on December 23, 1982, and the revival was scrapped.

After Webb's death, Chief Daryl Gates of the Los Angeles Police Department announced that badge number 714 — Webb's number on the television show — was retired, and Los Angeles city offices lowered their flags to half-staff. At Webb's funeral, the LAPD provided an honor guard, and the Chief of Police commented on Webb's connection with the LAPD. An LAPD auditorium was named in his honor. Jack Webb's LAPD sergeant's badge and ID card are on display at the Los Angeles Police Academy.

In 1954, a theatrical feature film entitled Dragnet, an adaptation of the series, was released with Webb, Alexander, and Richard Boone. Dennis Weaver plays R. A. Lohrman, a detective captain. The film begins with the shooting of small-time hood Miller Starkie (Dub Taylor) on orders from his boss, Max Troy (Stacy Harris). Friday's and Smith's superior is LAPD Intelligence Division Captain Jim Hamilton (Boone), a department member and the film's technical advisor. The Intelligence Division focused on the pursuit of organized-crime figures, and some of Max Troy's habits resemble that of Mickey Cohen, the known Los Angeles underworld boss; for example, Troy's LAPD file reads that he could be found at "Sunset Strip taverns and joints," as could Cohen. The film depicts the working relationship between the LAPD and the Los Angeles County District Attorney's office; Friday and Smith work to gather evidence that the DA's office deems sufficient to gain the indictment and ultimate conviction of Troy and his fellows. One scene contains a violent fist-fight involving the two detectives, with the close-up cinematic technique typical of Webb's style of direction. The movie's ending represents a departure from most "Dragnet' stories; no arrest is made at the story's conclusion. Chester Davitt (Willard Sage), Troy's underling and Starkie's killer, is killed by underworld figures, and Troy succumbs to cancer before the detectives, having gathered sufficient evidence against him, can make the arrest.

The film earned an estimated $4.7 million at the North American box office during its first year of release.[3][4]

Dragnet 1966 is a made-for-TV movie that initiated the return of the Dragnet series to television. It was intended as the TV pilot of Dragnet 1967 but was not aired as planned. It was eventually broadcast in 1969. The movie stars Jack Webb as Sgt. Friday and Harry Morgan as Officer Bill Gannon. The story focuses on crime more typical of the 1960s than of the previous "Dragnet" era; the detectives are assigned to find a voyeuristic serial killer similar to Harvey Glatman (played by Vic Perrin who appeared in the 1954 film as an assistant district attorney). Also appearing is Virginia Gregg, who had a role in the 1954 feature and was a frequent guest actor in the 1951-59 series and the 1967-70 episodes, and John Roseboro, a catcher for the Los Angeles Dodgers who dabbled in acting in the offseason; Roseboro played a plainclothes detective who had been the target of racial slurs by a child molester until Friday came to his aid.

In 1987, a comedy movie version of Dragnet appeared starring Dan Aykroyd as the stiff Joe Friday (the original Detective Friday's nephew), and Tom Hanks as partner Pep Streebeck. The film contrasted the terse, clipped character of Friday, a hero from another age, with the 'real world' of Los Angeles in 1987 to broad comedic effect. Beyond Aykroyd's imitation of Webb's Joe Friday and Harry Morgan's small role reprising Bill Gannon, this film version shares little with previous incarnations.the film was more a parody, and a hit with audiences, though no follow-up films were produced. LAPD Lieutenant Dan Cooke, who served as technical advisor for the Jack Webb series, was technical advisor for this production.

The show returned to television in the fall of 1989 as The New Dragnet in first-run syndication, featuring new characters, and airing in tandem with The New Adam-12, a remake of another Webb-produced police drama, Adam-12. The New Dragnet starred Jeff Osterhage and Bernard White as the detectives, and Don Stroud as their captain. Fifty-two episodes were aired over two seasons. The first 26 episodes aired between October 24, 1989 and January 21, 1990, with the second season of 26 episodes, airing between April 19 and September 9, 1990.

In 2003 a Dragnet series was produced by Dick Wolf, the producer of NBC's Law & Order series and spin-offs strongly influenced by Dragnet. It aired on ABC, and starred Ed O'Neill as Joe Friday and Ethan Embry as Frank Smith. After a 12-episode season that followed the traditional formula, the format of the series was changed to an ensemble crime drama in an attempt to boost ratings.

Retitled L.A. Dragnet, Friday was promoted to Lieutenant with less screen time and Frank Smith was written out, in favor of younger and ethnically-diverse cast played by Eva Longoria, Desmond Harrington, Evan Dexter Parke, and Christina Chang. Roselyn Sanchez was added to the regular cast, in a few episodes. With the Dragnet formula no longer in place, the program had the feel of a typical procedural drama. It was canceled five episodes into its second season. Three episodes premiered on USA Network in early 2004, with the final two on the Sleuth channel in 2006. In places (such as the Netherlands) the show is retitled Murder Investigation.

This movie was released on DVD in 2009 as part of Universal Studios' "Vault Series".

On June 7, 2005, Universal Studios Home Entertainment released the first season on DVD in Region 1. Because sales numbers did not meet Universal's expectations, no further seasons were released.

On March 17, 2010, Shout! Factory acquired the rights to distribute the series (under license from Universal). They released seasons 2-4.

No DVD releases to date of this remake that lasted 2 seasons.

Universal Studios Home Entertainment was going to release the first season of this short-lived remake on DVD on November 11, 2003, but this release was cancelled. It is not known if the set will be released,[11] though it is available for viewing on Hulu.