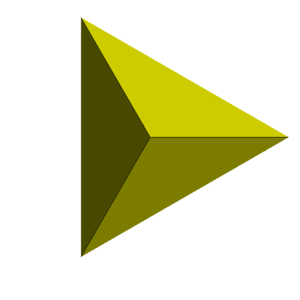 The 6 lines of the symbol can be seen in 6 edges of the regular tetrahedron (triangular pyramid), as viewed above one of the vertices.

The dragon's eye is a well known symbol of protection, said to protect anyone who recited the incantation to it. The dragon is a universal motif linked to various cultures of humanity for 5,000 years. The word dragon comes from "derkesthai" (Greek: to glance dartingly) which, in a Hindu tradition, was the hungry look of the very first being when its fiery spirit was born out of the abyss of water. The Dragon's Eye symbol stands for the balance of love, power and wisdom. Triple triangles are associated with the Goddess and the nine Muses.